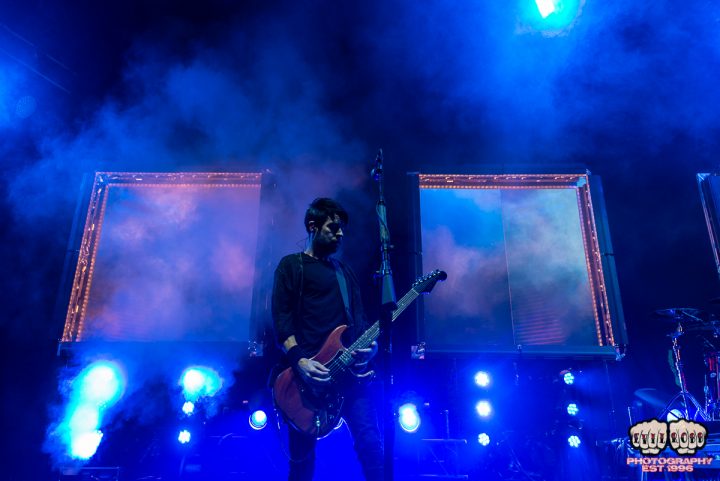 Chevelle has sold over four million albums in the US and has a new record forthcoming in 2020. Production designer, Robb Jibson of Chicago-based So Midwest, Inc., was searching for a 1000W LED fixture, with a shuttering mechanism that could close completely over itself in one direction. He held a shoot-out featuring ‘the top contenders’ in the category. “While all the fixtures we tested did a good job, Khamsin was the most well-engineered, the most well-polished of the group,” Jibson reports. “Its optics, clarity and perceived brightness won out. I also liked its edge sharpness, the flatness of the field and the way it physically looked.” Bandit Lites, Chevelle’s lighting vendor, invested in Khamsin for its inventory and supplied them to the tour.

The tour was a late addition to Chevelle’s schedule, and the team at SMW had just a short period of time to design the summer shows. “We have a new concept that we are working on for the next record cycle and considered revealing it for this summer tour, which really falls in-between the record cycles for them. So we decided to just adapt a few elements from it as a preamble to next tour,” Jibson explains.

The Chevelle’s tour performances feature no video and no spotlights. Instead, big frames of LED light battens ring the band in a semi-circle around the stage. The Khamsin fixtures are mounted in rolling carts on a custom adaptation of pre-rig truss. “Their primary focus is to provide stage luminance, but they are tasked for some energetic moments and deliver big aerials and big beamy looks that fill all the negative space,” says Jibson. “We are also fortunate that we are the only act that uses haze for atmospheric looks so we have the ability to create contrasting looks to the other bands!”

He points out that the band always asks him to use lighting “to capture the feeling, energy and emotion” of their set list with “bold, bright looks” in different moments with varying themes. Sometimes these are over-the-top wash outs of light but “don’t always resort to audience focuses that blind their fans.” On this tour the band’s time slot spans sunset to full darkness so they programmed the lights with that in mind. “We have some early big looks and then, when it’s dark, the power of the Khamsins drive home more saturated colour and layered beams of light,” Jibson says. 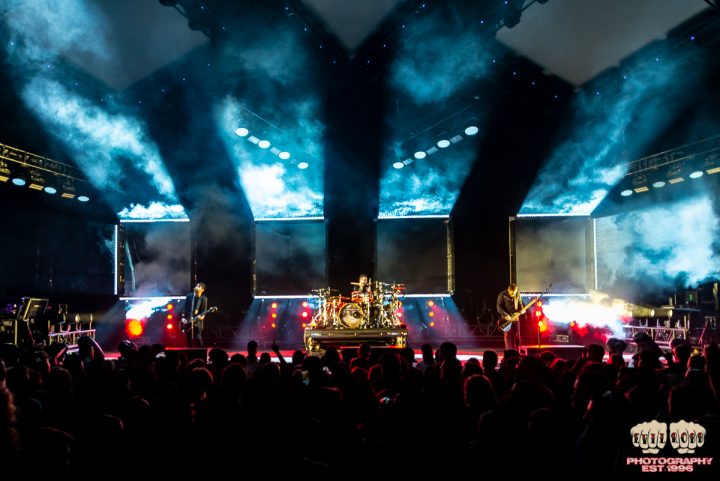 He also devised some innovative techniques for the tour. Using a mirrored aluminium substrate that is placed on the stage floor just upstage of the band, the Khamsin profiles can shoot into the mirror and bounce the light up for a backlit, moody, silhouetted look that gives the impression the fixture is in the floor just behind the performer. The bounce technique is also used on the drum riser, which directs beams of light up onto the drummer.

“Khamsin’s shuttering is amazing,” Jibson notes. “The fixture offers new ways to do shuttering that are so flexible and versatile: you can use the shutters almost like a gobo in many cases, morphing shapes with timing that matches the music!”

While the Khamsin profiles’ ‘raw horsepower and output’ are ideal for big, powerful looks, Jibson also believes the fixtures offer “opportunities to do more deeply layered and tailored looks for smaller venues, too – looks that you’re not used to seeing in venues of that size. It’s an exciting time for the technology and will bring new levels and layers to audiences not used to seeing them. Because heat, power and size are all reduced, you can use these fixtures’ massive output to go through more glass than you would with fixtures that you would typically use in 2500 – 5000 seat venues.”

Jibson says the Khamsin fixtures have been “exceeding my hopes” on the amphitheatre tour, and he “absolutely plans to roll them over to the band’s next tour,” which will soon be announced. The amphitheater tour kicked off July 21 in St. Louis and will conclude September 25 in Salt Lake City.