As the world celebrates the 50th anniversary of the moon landing in 1969, a new play endeavours to recreate the thrill of this historic event with a unique, immersive theatrical experience. APOLLO 11 tells the story of the 400,000 men and women who worked to accomplish this extraordinary mission. Told through the eyes of a retired NASA aerospace engineer as he recounts the story to his teenaged granddaughter, APOLLO 11 is staged in ground-breaking, purpose-built venue that plays host to twenty actors, 40,000 square feet of 360-degree video projection, a life-sized rocket and a powerful KV2 Audio sound system designed by renowned Broadway and West End theatre sound designer, Bobby Aitken, and supplied by Stage Sound Services in Cardiff. The first run has just finished in Pasadena, CA, with the next shows scheduled in Houston, TX in December. 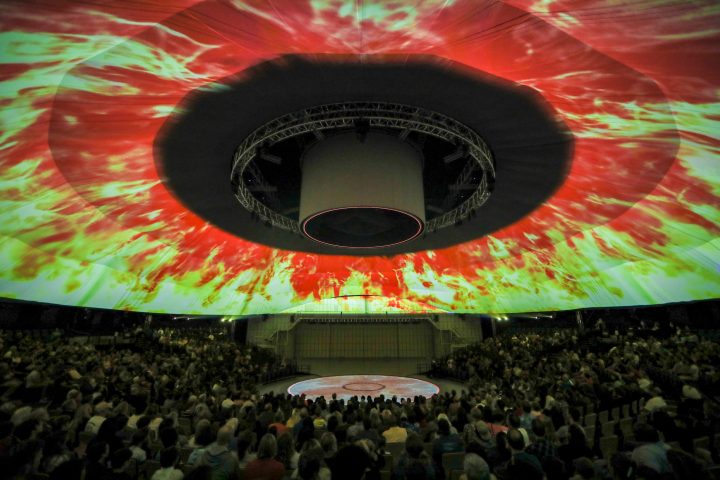 “This was a very interesting production to work on as it shifts in scale enormously from what is a fairly domestic drama where the sound is simply the spoken voice to these massive moments of immersive, 360-degree interstellar projection where all of a sudden the sound is everywhere and all-enveloping,” recalls Aitken. “I was charged with System Design as well as the Sound Design. I worked with Fergus O’Hare on the content”

The TiMax spatial reinforcement and tracking system was a key part of Aitken’s design and required a lot of work in the programming stage. “Everything came through the console and straight out from the faders into TiMax,” explains Aitken. “That gave us 64 outputs for around eighty loudspeakers in total, meaning that a very high percentage of the speakers were independently addressable. That gave us a lot of scope to move sound around the room. Also, all the actors were wearing trackers which enabled us to sort out levels and delay times on an actor-per-actor basis – one of the inherent issues of working in the round is that the cast member speaking inevitably has their back  to someone, so there’s a lot of correction to do.”

Aitken also pointed out that hanging loudspeakers was far from straightforward on this production, which added further complexity to the sound design. “One of the drawbacks of having such a huge amount of projection is that wherever you want to fly a loudspeaker, you’re inevitably cutting through a projection cone. We all had to make compromises, but fortunately the projection department has lots of clever ways of mapping their way around obstacles.”

So what of the loudspeaker system itself? “I love the sound of KV2 loudspeakers,” declares Aitken. “There’s nothing they produce that I don’t like, so it was an easy choice for me. I made the decision about four years ago that actually, point source systems in many venues makes a lot of sense, and I needed to go back to using point source equipment as much as possible. If I’m using point source, then I’ll try to use KV2 because they sound great, and frankly, they represent excellent value.” 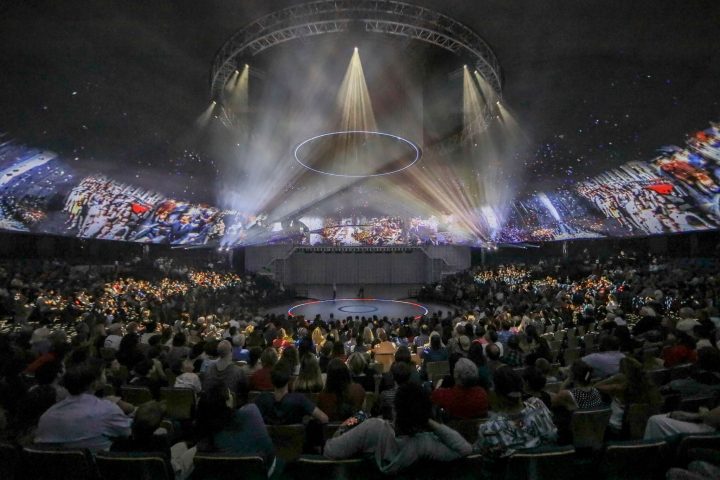 For the vocal system, Aitken specified a drop of eight EX26 high intelligibility active speaker systems around the 280-degree playing circle and twenty EX6s cut into the floor to cover the first three rows before the overhead speakers come into play. “Each of these speakers was individually addressable via the TiMax system to enable the actors to be tracked, as the geometry of the space is pretty complicated, and that worked super well.” A further 20 EX26s were flown behind the last row as a surround sound system which Aitken used for effects, reverb and a bit of music reverb as well.

The main music system was situated upstage on a walkway above a pair of huge gantry doors that formed part of the set. Aitken chose five wide dispersion, full range ESR212s – the outer pair mounted horizontally due to the architecture of the set, whilst the middle three were mounted vertically. “We didn’t have room for the bigger ESR215s which would have been my first choice, but the 212s actually worked really well. Better than I expected, in fact. They had to throw about 60m which is pushing it a bit for that sized box, so we touched in some of the vocal system as well just to brighten things up a bit towards the back and centre of the room. It sounded great.”

The ‘piece de resistance’ was perhaps the system – and the effects – used for the life-sized lunar lander which flies down from the roof amidst much CO2. “We used four EX10s to really localise the sound to the lander, but we also had four of KV2’s enormous VHD4.21 subs spaced at intervals under the seating up to about 3m off the ground. I’ve never used them before, but they are just ridiculous – they’re the size of a small car!” Aitken is laughing now: “Honestly, they are just hysterical – we didn’t use them that much, but when we did, Jesus, you knew about it…! They were just great, they moved the whole place.”

Aitken is thoroughly pleased with the results. “We had a really tight get-in on site, so really, the only way to guarantee that it would go smoothly was to do a technical build to prove the concept first. As all of the creative team and the equipment came from the UK, we did the technical build at Pinewood Studios. Once it had been fully tested, we containered it all up, shipped it to California and then re-built everything at the Rose Bowl in Pasadena. From a technical perspective, this is an amazing show, and I’m delighted to say that it sounded absolutely fantastic. In fact, it sounded a lot better than it should have done given the constraints that were imposed upon us. So yes, I’m pleased, and yes, it’s another great show with KV2.”