Be More Chill is a musical with original score by Joe Iconis, based on the 2004 novel by Ned Vizzini. After a 2015 regional theatre production, the musical premiered Off-Broadway in 2018 and is now nearing the end of a successful run on Broadway, at the Lyceum Theatre.

Lighting has been in the capable hands of Tyler Micoleau since the original production. At the Lyceum he has used GLP fixtures extensively, with the impression S350 and impression E350 making their Broadway debut, in combination with the JDC1, X4 Bar 20 and the staple impression X4. 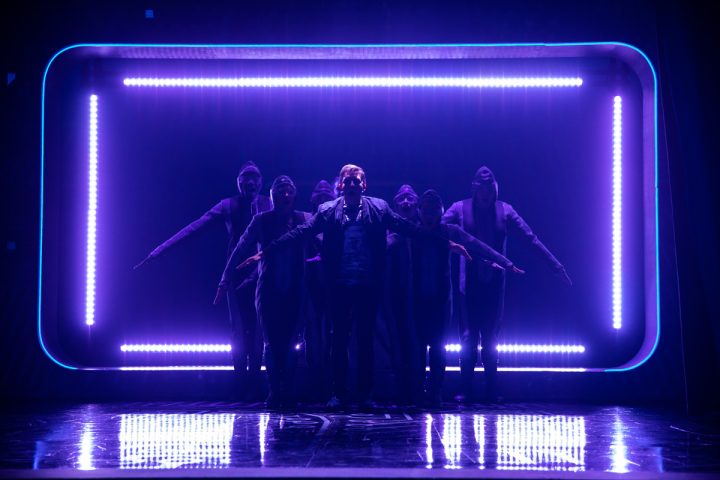 The Tony Award-winning designer notes that space considerations are a critical factor in most of the older Broadway theaters, the Lyceum being the oldest continually operating theater on Broadway, having opened in 1903. “Due to its compact size, overhead positions were very tight to the scenic portals and use of sidelight ladders was critical to sculpting figures within them,” he notes.

Be More Chill is largely a show about technology and its influence over people (the story is that a kid’s brain is taken over by a super-computer in the form of a pill). Beowulf Boritt’s set design (a layering of scenic portals in the shape of smartphones) provides the technology frame, but hides most of it until the ‘pill’ technology starts to take over. This brings the GLP fixtures to the fore.

“When we finally reveal the actual technology, it becomes a terrific opportunity to use new intelligent lighting technology as a functioning visual metaphor,” he says.

“I saw the complete GLP portfolio at the LDI Show in Las Vegas and knew immediately that there was so much there to choose from that would satisfy the specific needs of this design,” he continued. PRG had acquired a good deal of GLP fixtures, namely JDC1, impression X4 and X4 Bars, and they became the successful bidder.

It was while at PRG that GLP US introduced a prototype of the S350 and Tyler Micoleau could see immediately that it would make a great addition to the rig. He retained his existing trusty framing spots—and at LDI also reviewed other options—“but the demo of the S350 was the most exposure I had had to date.” He later experienced the production version of the S350, as well as GLP’s supercharged E350 Profile LED moving head. “This allowed me to see the S350 at its best and fully appreciate the differences between the two models.

“The most impressive qualities of the S350 were its compact size, the speed at which it functioned and the brightness, given its relatively small LED engine; but that was largely due to its superior optics.” 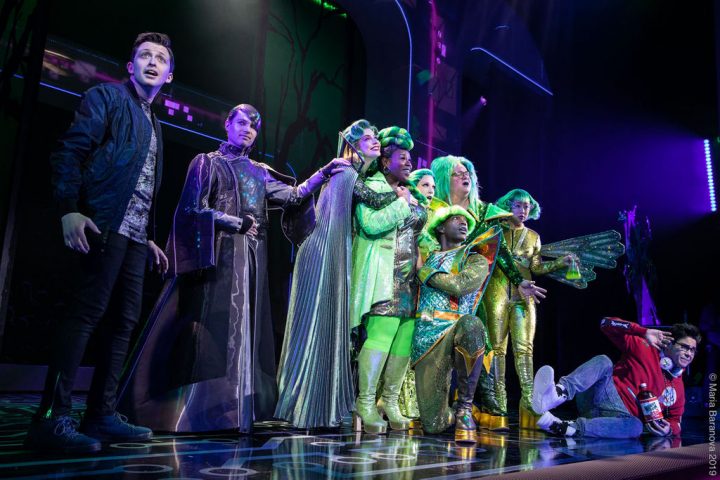 Added to the 12 S350 fixtures, hung overstage and at FOH, are seven E350s hovering over the band, where framing shutters were less of a requirement.

The three scenic portals on stage provided the opportunity to explore some unique effects. Embedded into these portals were 29 JDC1 hybrid strobes, and they proved to be a perfect fit. “What excited me most about using these units on Be More Chill was the graphic digital quality of the output. These fixtures could single-handedly represent the expression of a super-computer,” noted the designer.

On each of the fixture’s faces, there were 12 independently controllable RGB LED pixels, and the white strobe which could be controlled in 12 different sections. Tyler Micoleau marveled that this all came in a package that was only 6 inches deep.

Micoleau goes on to say, “There’s a layer of textilene mesh—a sort of a translucent plastic scrim laying over the face of the portals. I was initially worried that the JDC-1’s wouldn’t be sufficiently visible through the material, but when we tested it at Hudson Scenic the fixture couldn’t be seen at all inside the portal, but when it was turned on, the pixels and strobe lamp cut right through. It was fantastic!”

When full programming got underway ETC EOS programmer, Brad Gray looked at videos of JDC1 in different applications and produced a palette of digital effects to play along the music and the fight choreography. “It was all tightly cued, often with the use of musical timecode,” notes Micoleau. “Furthermore, we were able to balance the JDC1 lighting effects into the composition of the video being projected onto the portal faces.”

Although he had been using the original impression X4 on shows for six years, everything else from the GLP portfolio he was being introduced to for the first time. 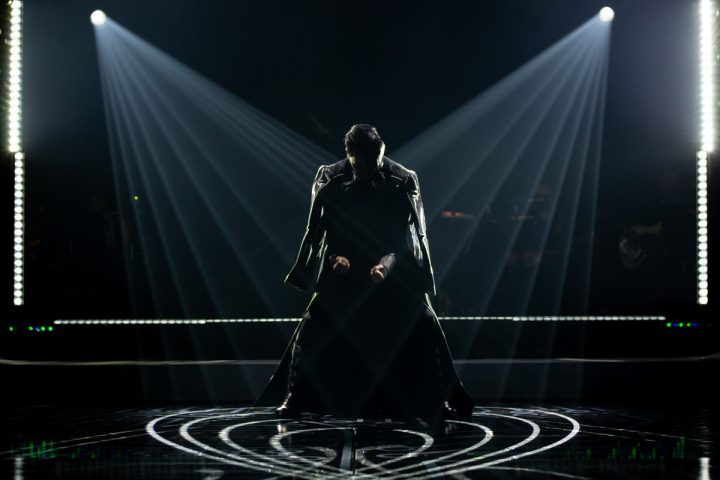 The 13 impression X4 are deployed as soft colorful backlight but with fast, tight beams for highlighting performers and visible light beams in the air. A handful are used from a near box boom position to color the scenic portals in conjunction with the video projections. “They are the unsung heroes of the lighting design and how it works to colour the scenery.”

Finally, the 21 X4 Bar 20’s are deployed in three ways: as full-stage backlight wash that can morph from a soft wash to a tight-beamed light curtain that can scan up and downstage; hung vertically as a punchy sidelight that can pan up and downstage; and hung on a flying rectangular truss rig, in full view of the audience, facilitating single-pixel chases and tilting effects over a dynamic visual array.

And of the S350 and E350 fixtures he says, “The speed of these fixtures was incomparable. Programmer Brad Gray would exclaim, ‘These are so f-ing fast!’ every time he turned the units on and pointed them. And as the rig was so tight, to the scenery and to itself, their compact size was immensely helpful, especially on the balcony rail.

“The extra punch of the E350’s was welcome over the band but their gobo-load became the star of the show.”

In summary, Tyler Micoleau states “Throughout the six-month run of Be More Chill, Mark Ravenhill. Miles Dudgeon and the technical staff at GLP have been amazing in their technical support and receiving feedback from the production’s electricians.

“With a theatrical production, running over a long period, there are many critical attributes to consider, and the choice of GLP fixtures on Be More Chill is a terrific example of all those attributes operating together towards a very successful design execution.”