Internationally acclaimed lighting designer Yaron Abulafia was asked by renowned director and choreographer Richard Wherlock to light his much hailed new ballet work, The Comedy of Error(z), staged at Basel Opera House (Theater Basel) in Switzerland. The story which explores the themes of confusion and misunderstanding directly connected to the realities of digital lives, ones that are also present in Shakespearean comedy. 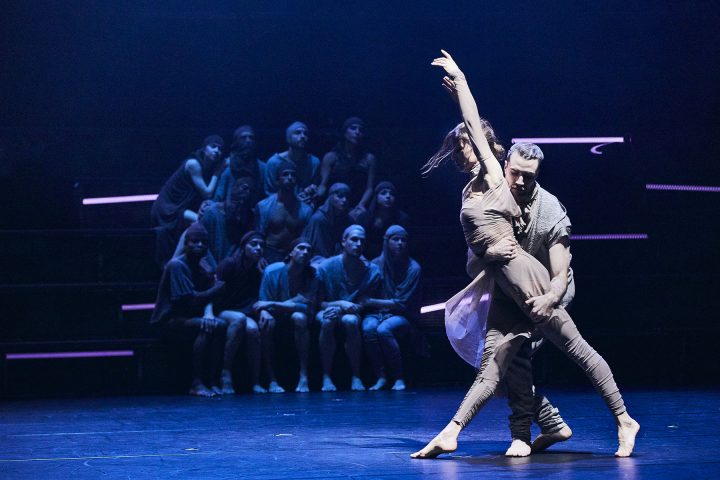 The story also contrasted and contextualised the lives of rich and poor in countries that are financially stronger or weaker, throwing out some complex and intense messages for debate and expressing ironies of geo-fiscal imbalance via the captivating mediums of movement, music and light.

Known for his work in theatre, dance and experimental performance, it was the first time Yaron had encountered Astera as a brand.

Ahead of the production, he started researching the available kit and thinking about how to incorporate the AX1s into his design, which led to him also specify 24 x Astera AX3 ‘Lightdrops’ which were purchased by the Opera House specifically for The Comedy of Error(z).

Yaron immediately liked the versatility of the fixtures and the fact they could be run completely wirelessly and fully reliably – via battery power and radio DMX control.

Additionally, the way-cool Astera magnetic undersides meant they could be simply and easily clamped directly to a huge metal cage, forming part of an industrial looking scenic piece that was incorporated into designer Bruce French’s set. This structure also served some of the other productions that were playing concurrently in rep at the Opera through the same period. The magnetic fixing enabled these “Comedy of Error(z)” specials to be quickly and easily deployed in the available pre-show tech period each day the performance was running.

Creatively, Yaron identified two distinctive contrasting scenes where the mood and ambience could be set utilising the lights as metaphors to reinforce the narrative, using the Astera tubes as the key light in two scenes with which to characterize the location.

The first depicted the menacing world of a refugee detention centre, where the AX1 tubes replicated dingy, flickering fluorescents and amplified the stark nature of the environment, where different colour temperature whites interplayed to raise the threat factor.

By varying the intensities of the tubes, Yaron could add depth and distance to the scene, enlarging the stage space with the optical illusion of some lighting being further away and in the distance.

Later in the show, the same tubes were used in bright red to highlight the underground world giving rise to scenes of brothels, prostitution and enforced slavery … a nasty place in which some of the refugees find themselves having to fight to survive. 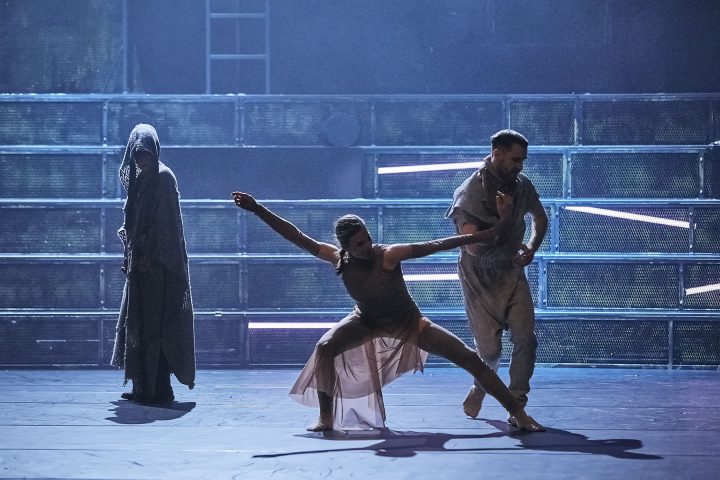 The intoxicating full reds achievable with the tubes – thanks to Astera’s seamless light engine and smooth colour mixing – was perfect as a mood setting for these jarring moments.

Thirty-two AX1s were installed – magnetically – around the inside of the cages, which enabled Yaron to get them into some interesting positions that would simply not have been possible utilising conventional rigging methods.

The 24 little AX3s were also run completely wirelessly, fixed to the upper stairs of the set, next to a wall / fence encircling the performance space, washing directly downwards creating vertical lines around the back wall of the stage. “They enhanced the shape and architecture of the space really well” explained Yaron, who was again suitably impressed with the rich colours.

He used the lighting generally to emphasise fences, cages and barriers in the poor world – cold, eerie, unpleasant, fragmented and restricting. In the rich world, the AX3s brought a golden glow to the set metalwork which exuded an impression of being strong, structural, controlling and selectively liberating.

“Lighting the set in such a specific and flexible way was paramount to the whole production as we needed to create so many different scenes and locations” stated Yaron, and the essence was to create illusions and trigger images so the audience could switch places and perspectives in their own heads … rather than looking at a series of literal set elements.

“The Astera’s proved to be stable, powerful and very bright – I didn’t run them at anything like full capacity” he reveals, adding that he will be using them in future designs.

The Comedy of Error(z) was a demanding work to light in general. The tempo was fast-paced, relentless and very lively, so Yaron engaged in rigorous prep work to ensure that his lighting treatments would flow and work smoothly once on site.

The AX1s and AX3s were programmed into the house EOS lighting console with all the other lights utilised, resulting in over 200 cues for the 90-minute performance, many of them slow, fluid and ever-changing … supporting the idea of constant movement and subtle but profound ambience transitions.

“It was extremely creatively and technically challenging, but we all achieved our goals in terms of creating an expressive work for audiences to enjoy and interpret” says Yaron, and the critics also loved the work as much as the public!

Basel Opera House technical director Joachim Scholz and lighting director Roland Edrich and Guido Hoelzer were also a great source of “technical support and inspiration” and they were the people who had great confidence in purchasing the new AX3s.

Yaron’s relationship with light as a powerful tool and a dramatic mechanism is imaginative, theoretical and practical: “It can help us see what we already know and constitutes a beautiful manipulation of the spectator, a lens through which to look at the performance. It recomposes the visual perception of reality and affects how we prioritize our attention. A true ‘eye opener’… Light can convince us to perceive and think in a certain way. Therefore, light is an argument – it is rhetoric!”