When TV comedy show 7 Days Live visited the Queenstown Winter Festival, the festival’s production supplier, TomTom Productions, was on hand with their Hippotizer Karst media servers from Green Hippo. A favourite of TomTom, thanks to its advanced integration and control features, the Hippotizer enabled them to easily deal with the additional visual requirements of the television recording. Produced by MediaWorks NZ, 7 Days Live is a popular TV comedy show in New Zealand. In June, the show took a road-trip to the Queenstown Winter Festival, on the shores of South Island’s Lake Wakatipu, to film a TV special.

“The brief was fairly simple,” says Hamish Edh, director of TomTom and designer of the Festival’s live stage video elements, “background eye candy that looks great on camera, as well as for the live audience, and having the 7 Days logo on the screens for the wide shots.”

Simple enough, with the stage’s varied visual elements already in place. “The design concept was based around mis-matching elements with different LED pixel pitches,” explains Edh. “To create contrast between the different pixel pitches, I use Martin Sceptron 20 battens in an array to complement the 6mm LED panels and to add horizontal lines to the overall look.”

Edh used TomTom’s go-to media server system, Hippotizer Karst, running two outputs, one to the 6mm LED panels and the other to the Sceptron via the Hippotizer’s Martin P3 System Controller integration. The textures played out on the low-resolution Sceptron were from stock content, while the 6mm panels showed custom content including Queenstown’s iconic mountains, created by Tim Goddard of TomTom, as well as the 7 Days Live logo where required. The operator was TomTom’s Matt Cooper. 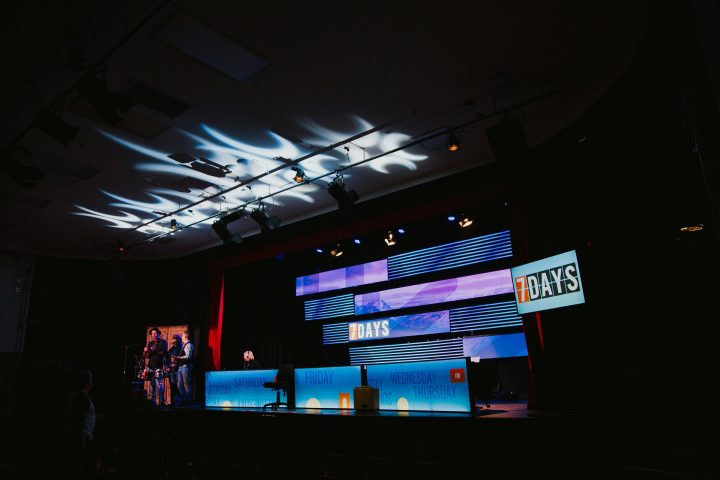 Edh’s design included four horizontal LED ‘banners’ rigged at staggered heights, from the lower upstage to the highest above mid-stage, each with the ‘mis-matched’ pixel pitches of 6mm panels and 20mm Martin Sceptron. Visuals were controlled from a Hog 4 console, one of the many consoles which integrates with Hippotizer.

“The direction we’re going in with design is to integrate traditional video and lighting elements,” says Edh. “This is why Hippotizers are great for us – they’re designed around control from the lighting console, which gives intimate creative freedom to the lighting designer to manipulate the entire visual look of a show.”

He adds, “The Hippotizer’s P3 integration for Martin Sceptron played a big part in our decision to invest in the Sceptron. Again, it gives us the freedom to design video and lighting elements into one product.”

Following the comedy performances, the stage design and the use of Hippotizer changed again. “For the music night we dropped the 6mm screen and used the Hippo as a busking VJ machine,” says Edh.

He concludes, “For anything using Martin VDO, Hippo is our go-to solution. It’s also our go-to for anything where the lighting designer requires end-to-end control of all the visual elements, so live music in particular is made so easy with Hippotizer.”