Leading no-frills Norwegian-owned supermarket chain Rema 1000 celebrated its 25th anniversary of trading in Denmark with a massive conference and party for nearly 9,000 staff, staged at the Jyske Bank Boxen arena in Herning.

The challenge of lighting this was down to Sune Verdier, well-known for his creative flare in concert touring and theatre. He utilized 124 x Robe moving lights at the core of his production design, which had to cover a full seated conference session in the afternoon followed by a full-on dance party and concert in the evening. 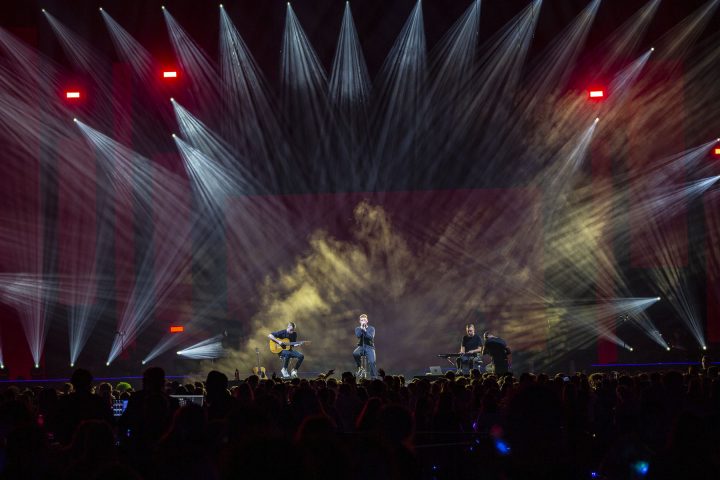 The evening’s action kicked off with a stonking hi-energy DJ set by Rema 1000 CEO Ole Robert Reitan and after a brief presentation for 13 regional store winners, from which Valby was crowned ‘Store of the Year 2019’, the full entertainment program started rolling, with some special show-stopping performances.

To deal with these exacting demands, plus large qualities of LED video, he needed the best, brightest multifunctional moving lights possible … and decided that Robe was the way to go.

Sune has lit the event for the last three years – although this year was considerably bigger because of the 25-year Danish anniversary – and it was also the first time in Herning Arena which holds 17,000 people. This was chosen for its space and availability and also as it was at the centre of Denmark.

He was originally asked onboard by head of show and production Frederik Heitmann of Simple Creations with whom he also works running lighting for the Arena stage at Roskilde Festival.

Together they produced the event’s spectacular, colourful and classy production design, tapping into the great creative synergy they enjoy and working in a fast paced, action-packed show environment requiring slick coordination and some intelligent advanced planning.

The biggest overall challenge was creating a BIG impression in the voluminous 12,500 capacity arena.

Sune wanted the aesthetic to be video heavy from the off, so, inspired by the theme of “1000 Colours of Rema”, the idea was to make the space explode and come alive with colour, vibrancy and good vibes!

He and Frederik presented several design ideas, and the one that Sune ended up developing for the show involved 400 square metres of asymmetric LED shapes with as many lights squeezed into the gaps between these as possible.

He actually started with a solid block of video and lights, from which he subtracted elements until he ended up with an amount that looked good and was commensurate with the budget ballpark figures! He wanted a clean look across the stage with the asymmetry – initially inspired by the Rema 1000 Colors logo – to add some visual intrigue, and also because it tends to enlarge spaces. 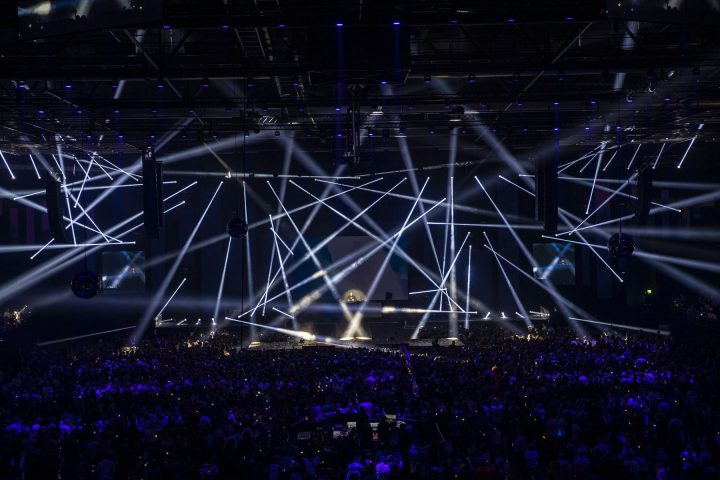 Two stages were built on the auditorium floor one in front of the other – the plan was to have five-minute changeovers, so they needed two performance areas so one band performed while the next one was set up.

The first stage was 28 metres wide by 12 deep, connected via a 10 metre catwalk to a 14 metre wide by 4 deep stage in front of it at the end of the runway … right amidst the audience.

This gave the visual picture serious depth and made a clear statement.

A flying DJ booth come in and out from the ceiling at for ‘magic moments’ including during Ole Rober Reitan’s DJ set, and the Valby ‘Store of the Year’ manager also took a turn to be hoisted aloft in the roof perched on a giant Golden chair!

The trussing configuration in the roof was straightforward. Vital to the whole clean lines concept was a 60 metres wide row made up from 60 of the 78 x MegaPointes at the back, marking the visual horizon and giving a symmetric reference point.

Below this line of MegaPointes, all the video elements were flown, with 20 x strobes also rigged on this same back truss.

All the key and top lighting over the two stages were achieved with 18 x well-placed Robe BMFL WashBeams, with a further four BMFL WashBeams rigged on an advance truss running via a Robe RoboSpot remote follow system.

Generic stage front light and all the audience lighting was provided by several rows of LED wash fixtures, plus a few more specifically to augment the key lighting BMFLs.

Sixteen MegaPointes were positioned on the floor in the wings of the main stage and used for big sweeping aerial effects and low cross and fill lighting.

Sune chose MegaPointes because he needed the punch and power to work with the large amounts of LED video surface – a mix of Roe MC5 and MC7 – for which they were a “perfect solution.”

He’s used them on tour for some time and really likes the versatility. “Having a fixture that can replicate a beam, a spot and a wash luminaire – and do it well – offers flexibility and a huge range of looks even if you don’t have so many lights! It’s literally like having double or triple the number of fixtures.”

For a show like this with lots of dance and electronic music, having an array of good effects fixtures was also essential and another big bonus in spec’ing MegaPointes. 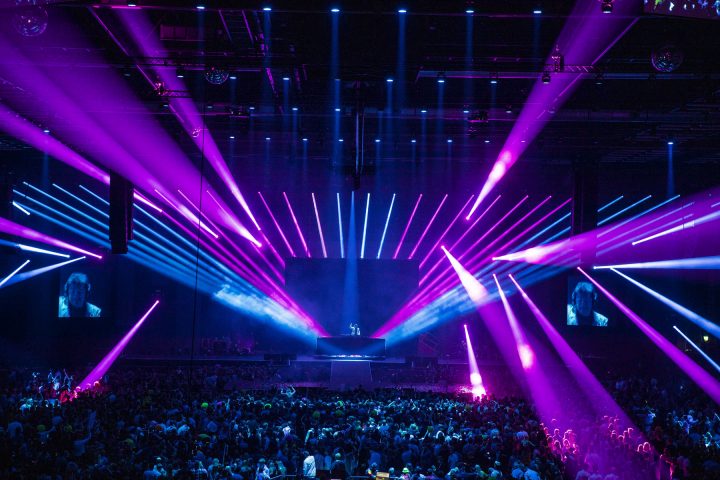 Knowing the fixtures well, how they behave, and work was extremely helpful in programming fast and efficiently, a task accomplished over 2 long nights in the venue, preceded by as much advance pre-vis as was possible! Sune already new that time on site was tight and that this would be the biggest challenge.

He programmed everything himself into the grandMA2 console and worked closely with his systems engineer, Thomas Brockmann. They accommodated three guest LDs / operators and Sune lit the other four artists and ran all other show lighting element.

It was the first time Sune had used BMFL WashBeams – he’s worked extensively with the Blade and Spot versions of Robe’s most powerful moving light.

He selected the WashBeam version with its additional brightness to work best with the intensity of the video, and he also used them for some impressive aerial effects and big wide gobo effects across the audience.

The four BMFL WashBeams being used as remote follows were on a truss 10 metres in front of the ‘catwalk stage’ (the one further into the arena) giving them full coverage of both stages.

They were initially spec’d to meet Nephew’s technical rider and also to ensure that they could cover the whole stage and wing areas properly with enough output. The four operators were positioned backstage, with Sune having full control of the colour mixing and dimming (on override), and the operators tweaking pan / tilt, focus, zoom and iris.

Three grandMA2 full size and one grandMA3 full size consoles ran lighting and video, with a grandMA2 light for the Pyro all networked and managed over MA-net, with guest LD showfiles merged into the system and universes allocated to the console they used as needed.

Time pressure was intense, but with an experienced and talented production team and around 80 technical crew – out of around 800 staff in total running the event – everything went smoothly. Good communication was essential, and with these base criteria in place, Sune commented that it was “similar to running any festival or a large TV show” … an environment with which they are all familiar!

The lighting and video equipment were delivered by Mediatec from Sweden, the video content was produced by Third Option and the audio kit came from Patchfire. Sound was designed by Markus Bock.