With five floors and four stages, Kid Rock’s Big Ass Honky Tonk and Rock ’n’ Roll Steakhouse is the largest and most advanced entertainment venue on Nashville’s always-crowded Broadway. Thanks to a comprehensive audio installation from QSC, the sound from multiple live acts on different floors is audiophile-grade. “The entire venue holds about 2,000 guests, with up to 600 in the main room and mezzanine,” says lead sound engineer Josh Hastick. “During busy seasons, all four stages are going at once, and we host as many as 16 bands, each with a four-hour set, in a business day.” That kind of turnover requires equal measures of flexibility and predictability from a P.A. system, which Hastick says that “QSC delivers in spades.” 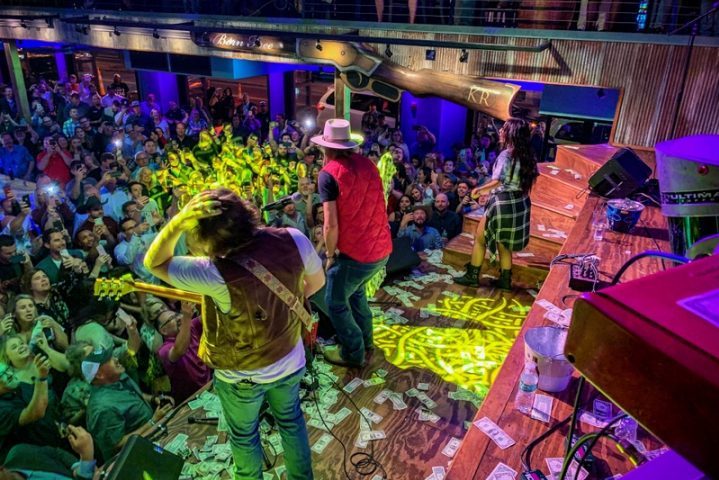 The stage in their main room is flanked by three KLA12 active line array cabinets per side, complemented by four KW181 active subwoofers. Monitor mixes feed eight K10.2 powered loudspeakers on the stage, with an additional KW181 for the drum riser. Between the main floor and the surrounding mezzanine, 16 AC-6ST surface-mount satellite speakers are deployed on delays time-aligned with the mains; these are driven by multiple CXD4.3power amplifiers. Still more K10.2 and K12.2 speakers are strategically placed as fills, along with an extra KW181 to deliver thumping bass to the balcony crowd.

The third and fourth floor levels at Kid Rock’s, as well as the expansive rooftop bar, are all autonomous clubs-within-the-club. Their three performance stages are identically configured with E112 main loudspeakers fed by CXD Series amps, a KS212C powered cardioid subwoofer per side, K10.2 active speakers as monitors, and yet more CXD amps and AC-S6T satellites to bring the music to peripheral areas. In addition, the rooftop adds ten AD-S12 speakers and four AD-S112sw subs to fill its extended patio area.

“Greg Glaser from GC Pro in Nashville was an important part of the planning, installation and supplied the equipment for the club. He and Mike Mills, our sound supervisor at Honky Tonk Central were big proponents of QSC,” says Jeff Eslick, sound manager for the Honky Tonk Central clubs. “Kid Rock’s name is on the front of this club and he is ultimately the judge of this sound system. We love the QSC system — it’s crisp and clean and sounds great.”

“In the main room and on the mezzanine, at least half the wall area is garage-style windows that are open or closed depending on the weather,” explains Hastick. “If they’re open and there’s a large crowd, we have zero reflections. If they’re closed with a small crowd, we have a lot of reflections. The KLA system has been superb at handling both scenarios.”

“In fact,” Hastick continues, “the array is so well-tuned to the room that someone can be singing on top of the bar — yes, it’s actually designed for that — and accidentally point the microphone towards the stage without causing feedback.”

Audio going to satellite speakers must be delayed so that it arrives at listeners’ ears at the same instant as sound from the mains. Hastick finds QSC’s approach to this very helpful: “That delay is happening within the CXD Series amps, not in the mixing board or anywhere else,” he notes. “I can just plug my laptop into them, call up speaker profiles as needed, and we’re good to go.” 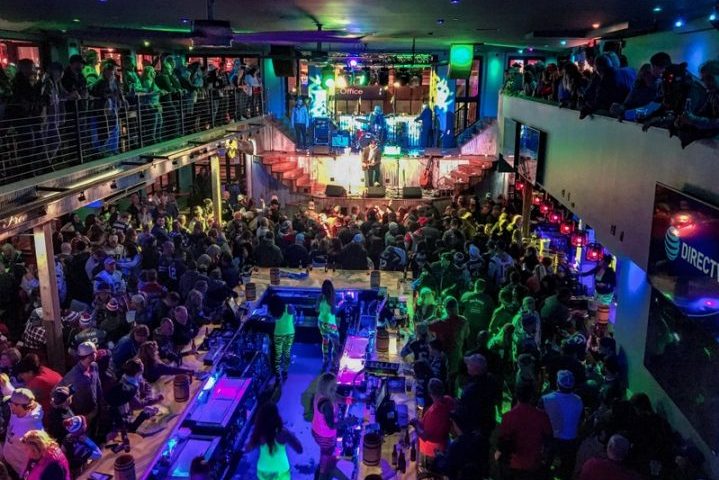 Speaker profiles are even more relevant to the E112-centric systems on the upper floors’ stages. “QSC tunes their speakers based on all kinds of readings from measurement mics,” says Kevin Duthu of HWP Co., the QSC rep firm in the region. “They then create profiles or what you’d call voicings — for full-range, for dance music, for wall proximity, for use with a subwoofer, whatever. They call this ‘Intrinsic Correction’ but we might as well call it the secret sauce. “They installed the E112 boxes where they needed to be physically, auditioned voicings right from the CXD amps for the E Series Speakers and 99 percent of our work was done!”

The upper levels are smaller than the main room and thus require more bass management. Duthu explains why this made the KS212C an ideal choice: “A cardioid sub throws a tight pattern of sound, like a cardioid mic in reverse. As far as I know, QSC has the first implementation of this idea in a single, compact box. You used to have to point drivers in opposite directions and shift the phase of one very precisely to get the amount of cancellation needed to create that pattern. With the KS212C, we just plug it in and go. All that bass energy is directed onto the dance floor where it’s most wanted, but it’s not thumping drinks off tables or the mirrors off the bathroom walls behind the stage.”

As to overall audio quality, Hastick comments: “The combination of punch and clarity we get in every room is exceptional, even when some of the owners show up and want us to turn it up!”

For Duthu, it comes down to a relationship with a company he trusts with his customers’ livelihoods. “Of course, some other brands make great live sound products,” he says, “but for me it’s about who’s willing to put in the extra time. Anytime we’ve had an issue here or at other bars we’ve worked with — and I can count those times on one hand — QSC has been right there. Once you’re QSC, you’re family.”