Plugins from Waves Audio were employed by live-sound engineers for a variety of performers in diverse setups and consoles throughout Lollapalooza 2019. Prominent FOH engineers provided a peek under the hood of their productions, sharing which essential plugins help them create a tight, remarkable-sounding show under challenging festival conditions. 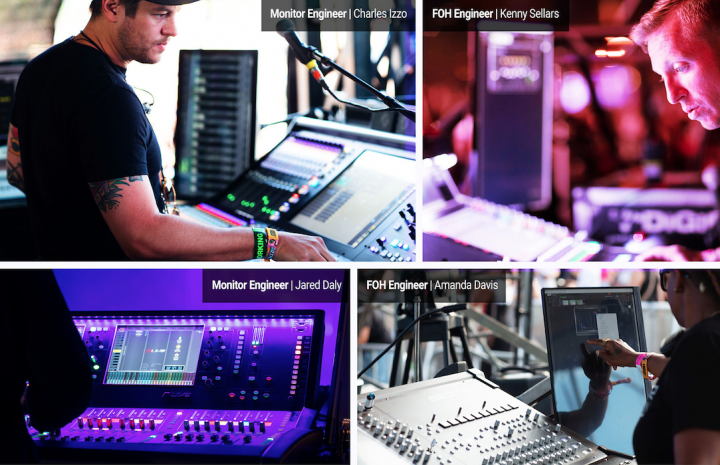 Conceived in 1991 by Perry Farrell as a farewell tour for his band Jane’s Addiction, the first iteration of Lollapalooza ran through 1997; but it wasn’t until a partnership with concert promoters C3 Presents in 2005 that Grant Park in Chicago became the festival’s permanent home. Now one of the longest-running in the United States, the iconic festival brings in close to half a million people each year, taking place over four days in the heart of Chicago’s lakefront, right at the height of the Second City’s sweltering summer heat.

2019 was no different, with a lineup featuring the world’s biggest artists across hip-hop, electronic and every flavor of rock. As these top-billing acts all descended upon Chicago’s historic front yard, so did their world-class sound teams.

The sound engineers for festival headliners Childish Gambino, Twenty One Pilots and J Balvin, plus top-drawing acts like Janelle Monáe and Kacey Musgraves, have come to rely upon Waves plugins for their live mixing needs. With some acts and their teams flying in and out the same day, engineers depend on the reliability and stability of their rigs to make any show seem effortless and sound exceptional.

Live sound engineers at this year’s Lollapalooza explained how Waves tools help them stay one step ahead of tight festival requirements and deliver sensational sound.

Mixing the sundown set on Friday night at Lollapalooza, Janelle Monáe’s right-hand woman, front-of-house engineer Amanda Davis, has been touring for over six years and a Waves user for “as long as I can remember,” and she delivers a polished, brilliant sound. Davis likes to keep it concise when it comes to effects processing: Running the Waves MultiRack plugin host with a SoundGrid ImpactServer-C through DMI cards on her trusty DiGiCo SD10, she works hard to find the right amount of sheen she can get from a plugin, and when she does, she runs with it. “For a lot of inputs I’ve been sticking to my regulars like the H-Comp. On the bass, I’ve also incorporated the dbx 160 compressor. And on my L/R I have the API 2500 — there’s something about it that just pushes my mix out past the PA. I barely touch any parameters on the API 2500, but as soon as I engage it everything just comes to life!”

For Monáe’s vocals, Davis uses “the Renaissance plugins: R-EQ, R-Compressorand R-Vox. On my background vocals, I also use the PuigChild Compressoralong with the R-Vox. For one song only, I add the GTR onto the vocal chain to give me a distortion effect. Lately, I’ve been trying this with the OneKnob Driveras an alternative. But the main thing is the R-Vox — it just puts the vocal right where I need it in the mix. I go pretty aggressive on it, almost to the point where it’s too much; but I’d rather have to dial back than have a mix without the main attraction being heard!”

FOH engineer Phil Gornell is on a mission to recreate the precision sound of a studio recording in the live setting. If you’ve heard Bring Me the Horizon on tour, you might be convinced that this is more than an ambition — it’s a reality. Concerned for many years about the ability to replicate that amount of DSP processing in a delicate live environment, Phil now says how improvements in technology along with Waves tools have helped him reach that goal of not compromising quality for resources: “The F6 Dynamic EQ is first in my chain for a lot of channels and groups. It’s essential for cleaning them up before I can process them further. Finding what resonates in an ugly way in each room, and then cleaning it up so I can amplify it, without becoming too harsh or out of control in each room — that’s key to me. Besides the F6, I’m using the C6, H Delay, Torque, SSL E-Channel, H-Reverb, TrueVerb, the OneKnob Series, the MV2 comp, some of the CLA signature plugins – CLA Vocals, CLA Effects, and CLA Bass – as well as the Primary Source Expander (PSE).”

Gornell remarks, about uncommon uses of plugins, “Waves Torque is a drum pitch shifter, but I’m using it on vocal effects to give each effect a little pitch shift, and really thicken up the returns. Also MV2 on snare to retain those ‘triggered’ drum velocities that people are so used to hearing. I’ve started using the SSL E-Channel after my reverbs to sculpt the sound of the returns coming into the console. The ‘CLA Deep Snare’ preset gives a thick consistent return on snare drums and makes the snare pop.” He adds, about plugins that he had not used in the past but have become go-to’s, “ The Waves MV2 is a new addition for me. It’s very light and low latency, but it does a LOT of heavy lifting. Using it on kick/snare and bass gives my mix a solid and consistent foundation to build my mix on.”

A 17-year veteran in the live sound business, Charles Izzo has been using Waves tools professionally for over a decade. “I like the consistency, the comfort of knowing that no matter where I am in the world, no matter the type of show, no matter if I’m on FOH or monitors, when I put my settings into these plugins, they will perform exactly as I expect them to.” Mixing monitors for Donald Glover a.k.a. Childish Gambino, Izzo is constantly optimizing his effects chains, going for that solid dynamic sound that he feels only studio classics can deliver. “The Studio Classics Collection bundle, with the Waves SSL and API plugins, is used on pretty much any show that I mix. Having the coloring and responsiveness of those plugins makes a huge difference for me, whether it’s at FOH or monitors.” Izzo comments, about vocal processing, “I have a standard vocal chain that I use for most artists. If I have the SSL Live console, I begin with the console preamp and EQ. On other consoles, I normally use the Waves SSL G-Channel plugin. From there it goes into an original Empirical Labs Distressor — or if I don’t have a Distressor it’s always a Waves CLA-2A plugin. After that I have the C6 multiband comp to fine-tune the dynamics, and finally I go into an NLS Non-Linear Summerfor some popping color.” When processing instruments: “On guitars, the Renaissance Axx is straightforward and made for guitars. I also use the NLS Non-Linear Summer to add some analog character to Fractals or other guitar modeling rigs; on bass I will usually use a CLA-76 or CLA-3A depending on the player. Doing FOH I also use a C6 Multiband Compressor with the kick drum side-chained to it; when used on keys, the Vitamin Sonic Enhancer is great for molding key sounds, and LoAir is really nice on bass synths, especially when you really want to make a room shake.” He adds, “In addition, I use InPhaseanywhere I have open mics with close proximity to one another.”

Playing over 100 shows together at this point, FOH engineer Kenny Sellars and the dynamic duo of Twenty One Pilots – frontman Tyler Joseph and drummer Josh Dun – have covered many musical genres and sound design explorations. “This tour is full of surprises! TOP always keeps me on my toes,” Sellars says. “From the drummer deciding to sit on the singer’s shoulders and sing, to the singer disappearing and reappearing in the 300 level of an arena, I just hang on for the ride! But I also have the privilege of collaborating with the artists who wrote the albums and working with them on every nuance of the music and how it should translate live. I have been using the F6 dynamic EQ, JJP Drums, LoAir, MaxxVolume, Manny Marroquin Distortion, C6, GEQ, H-Delay, and H-Reverb; those are my go-to’s this time. And I can’t say enough about CLA Bass: complete control of the bass in my shows!” He adds, “I find that combining my DiGiCo SD5 console’s dymamic EQ and comps with the F6 Floating-Band Dynamic EQ and MaxxVolume allows me to keep the vocal in-my-face but not overpowering. Whether [Tyler] is whispering, rapping, singing or screaming – trust me, he does it all! – this combo keeps his vocal right where I need it. I typically use the console’s dynamic EQ to control the screams, and then MaxxVolume to level out the vocal, and the F6 to shape the overall tone.” He continues, “I love using the Waves GEQ Graphic Equalizer plugin with RTA – especially helpful when I’m checking during an opener or another stage playing at a festival. It allows me to not only listen but also visualize my inputs. For me, the flexibility of Waves is what makes it a staple in live sound. Every time I come up with an idea or am asked to create something, there’s a set of tools for it.”

FOH engineer Travis Bing, helming the boards for six-time GRAMMY®-winning country singer/songwriter Kacey Musgraves’ show, talks about the vocal processing: “My chain is a Puigchild 660 into F6 into C6 into the NS1 Noise Suppressor, into parallel group compression, and finally into the PuigChild 660 compressor again. PuigChild is a constant for me on vocals, and the F6 has become a strong go-to as well: it’s like the C6 on steroids – so versatile and can achieve so much so quickly. I use the PSE (Primary Source Expander) on my background vocal groups. I have five background singers, so I’ve got to do something to suppress those open mics whenever I can.” He adds, “The plugins that I constantly go back to are CLA-76 on the kick, PuigChild 660 on vocals, and API 2500 for everything else I can. And I always use the C6 Multiband Compressor on the master bus as kind of a last-step safeguard: During soundcheck I’ll pinpoint a couple of bad spots in the room and set compression points at those frequencies – so as I dig into the mix, these bad spots don’t get worse. Plugins for me are the icing on the cake. I do believe that amazing sounds should come from the source whenever possible, so if something feels off tonally, I’d first walk up to the stage, listen to the source and change what I need up there. Then come the plugins: I’ll get the kick sounding good at the source – then I’ll throw a CLA-76 to get it sounding even better!”