It was a comfortable position for Aubrée, to find himself in. Having previously worked with other well-known artists, and formerly operated in an assistant design capacity with Indo, he stepped up for the last two last shows of the long-running 13TOUR, which took to the road back in February 2018. Nicola Sirkis, Indochine’s leader, decided to create a whole new show for these two last stadium dates as a big surprise and experience for the fans. And helping provide a fitting finale were well over 1,000 lighting fixtures, including 794 GLP impression X4. All were supplied via PRG France from their bases across Europe. 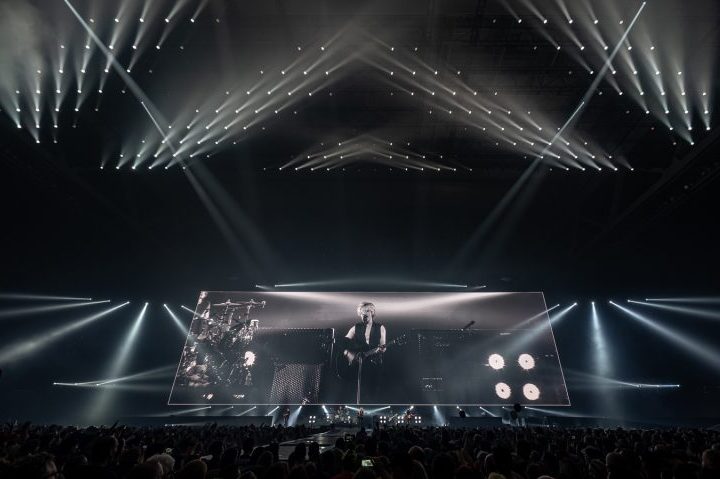 The vast majority of the X4’s were consigned to the lighting roof with another 36 populating the cross-shaped stage and proscenium edge, creating volume and depth, and 36 of the smaller impression X4 S positioned around the band on stage.

Jean-Christophe Aubrée has regularly turned to GLP’s LED solutions on festival rigs across Europe. “Most recently, I have been using the X4 Bar 20 and the awesome JDC1 hybrid strobe to create very interesting looks,” he says.

At the Stade Pierre-Mauroy in Lille, where the shows took place to sell out audiences of 30,000, the lights were hung at a height of 30-meters, and therefore needed to deliver full power.

“I was looking for a reliable product that would achieve consistency over 758 units without any variation in terms of colour or dimming curve. Accuracy was my major concern as they would be responding all together, as one huge piece of light.” This synchronicity and choreography was an essential element.

“The X4 zoom helped me a lot as well, even at this height, turning this very big lighting piece into many different shapes, sometimes abstract or at some point graphic.”

Another concern, he said, had been the mounting system—but again GLP was equal to the challenge. “When you have 722 fixtures following a precise layout it is so nice to have an easy and space saving clamp system, as with the X4, making the setup highly efficient.” 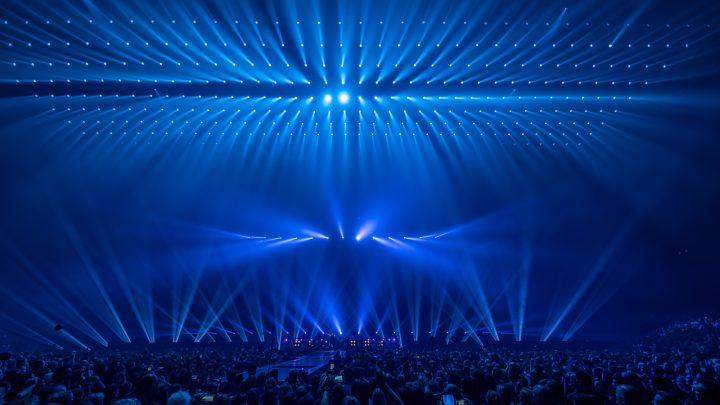 As Nicola Sirkis was looking for this stadium experience to be as immersive as possible, Aubrée, was tasked with “making the audience forget about the place, land lose the feeling of dimension and distance.”

Aside from the 50 x 15m video screen, onto which live video images of the band (and other effects) were projected, it was the 72m x 34m lighting roof, containing the 722 X4 impressions, that held the key. “This roof sometimes washed all the audience in a static way, as a big architectural piece, and sometimes more dynamically to involve the audience in the band’s energy. It was a cross between modern architecture and a sci-fi vision, helping the audience to feel they were somewhere other than a regular stadium venue.

“At some points in the show I got the feeling the lighting roof was way closer than it actually was, and it was a nice feeling to lose my bearings in this way.”

But the most exciting part was lighting the band themselves, he said. “This is what created the biggest onscreen impact from the live broadcast cameras — the energy pulsing 20 times bigger and brighter.

“It was nice to have such a tiny fixture as the X4 S, so discreet on stage but also very bright. I used them as side and back lights to light the band and create depth of field for all the cameras shooting the stage and broadcasting the images onto the screen.” 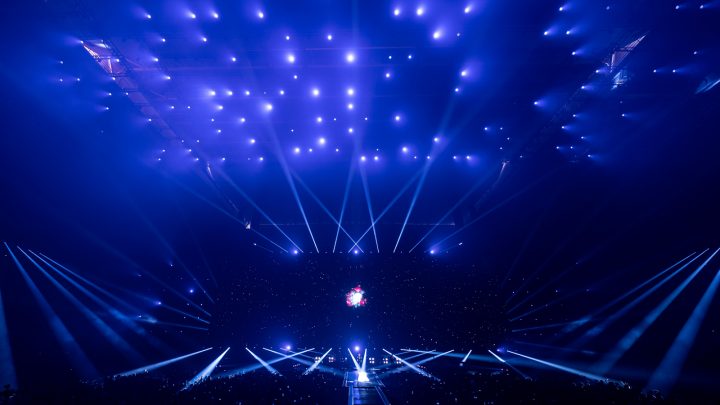 In summary the LD says, “These GLP fixtures were so reliable, particularly considering the high temperatures we experienced in the stadium. They are extremely powerful, flexible and most of all very smart in terms of mounting solutions, menu setup, and programming mindset. When working with that number of fixtures number it is so nice to have something so easy and efficient to set up.

“When we turned all the roof fixtures on together for the first time we were so happy to have every response tight and smooth. Sometimes the roof was lit with regular cues and sometimes through pixel-mapping; both methods were super fluent and all in sync.”

Jean-Christophe Aubrée credits the close relationship built up with production and Nicola Sirkis in particular for the success of these shows. “This helped to push the project and ideas further than we had ever imagined.”

He was also fortunate to have such an accomplished crew. This comprised Laurent Boillot and Antoine d’Halluin as project managers, and Matthieu Bruni and Patrice Giono (lighting crew chiefs), surrounded by a team of 20 top technicians. “They all helped to make my work so fluent,” exclaims the LD in conclusion.