Festival season is here, and with it the fine art of performers touring their own distinctive-but-practical visual ‘specials’ packages, carefully imagined to ensure that their show has the edge.

Mark Ronson’s stunning “Broken Heart” visual and lighting design is among the most creative and inventive.

The concept was initiated by his creative director Jed Skrzypczak and is a combination of two stylish mirrored silver heart set pieces which wrap the DJ booth, coupled with integrated lighting that is co-designed by award winning LD Tim Routledge and Ben Cash from Flare Lighting. 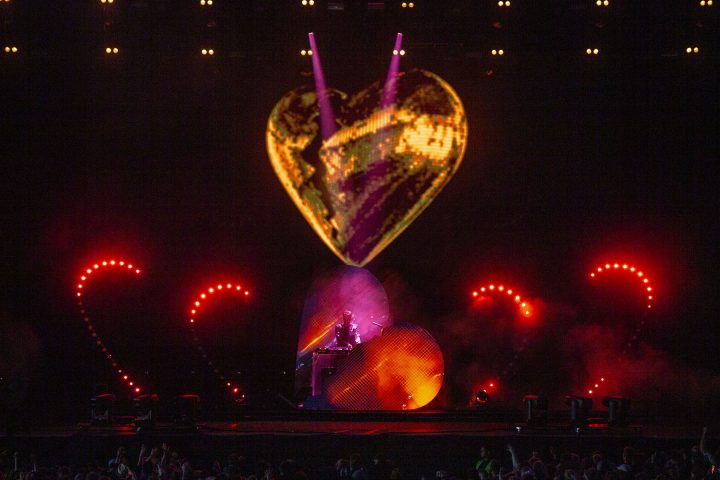 The artist wanted something eye-catching and cool to go match the music – a largely fluid set, carefully crafted for each show, with some centrepiece anthems and other parts inspired by the magic and vibe of the moment.

He wanted the lighting and the look to be theatrical and dramatic as well as different from a ‘standard’ electronic setup. In addition to the Asteras, there is a row of BMFL moving lights at the back together with tilting LED battens upstage, also part of the extras package.

The two offstage AX3 heart stems are slightly further upstage, adding depth and three dimensionalities, while a large video screen plays a dynamic selection of visuals throughout, all helping to connect Ronson’s immersive mixology with his audience.

The idea was to use the Asteras to add this architectural context to the lighting design and he co-ordinated this aspect of the lighting design. The AX3s are attached to the stems via their magnetic back plates which are extremely strong and one of the beauties and ingenuities of the Astera design.

The stems are on wheeled bases that can be swiftly positioned onstage and locked off for the show.

“Small, bright, lightweight reliable fixtures were exactly what we needed in addition to them being wireless and magnetic, so the AX3s ticked all the boxes” Ben confirmed.

Having used them on numerous events already, he knew Astera LEDs are excellent high quality lightsources that would help produce the right aesthetics. 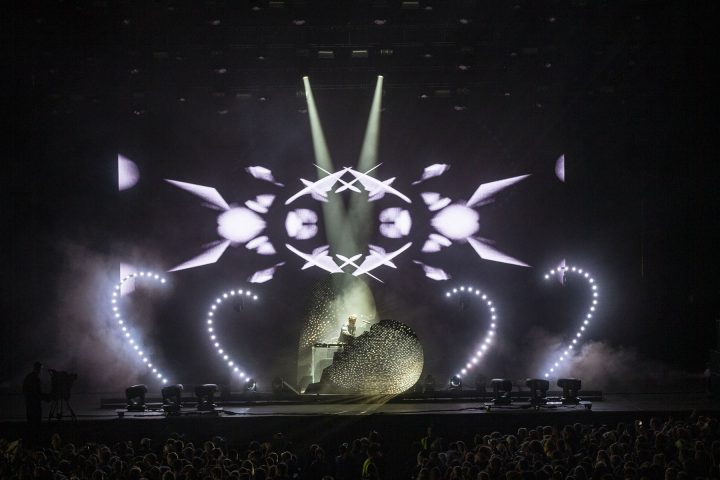 For transit, the AX3s live in their handy 8-way charging briefcases. It’s extremely simple to set up, and easy for the local crew to get involved as the stem rig is marked up in detail, colour coded and numbered. “It is a perfect festival rig,” stated Ben.

Just one cable is run out to the stems – and that’s for the Spikie LED moving light at the top of each one.

Set to ‘7 hour mode’ – for good brightness and allowing enough time for testing and being left in the stage wings prior to the performance – the AX3s are fitted with a medium diffuser to soften the edges slightly so they produce a nice half-heart shaped curtain of light.

He and lighting director on the road Nikita Jakovlev – the two are sharing operating duties through the summer – have been able to produce a wide range of effects, from atmospheric stars and twinkling to energising and invigorating colour chases and intensity pulsing.

The Asteras are being run over ArtNet from a grandMA2 lighting console – sent to the lights via wireless DMX – and are utilised throughout the whole set.

The European festival shows kicked off with the BBC’s One Big Weekend in Cleveland and have included Northside at Aarhus in Denmark, Parklife in Manchester and Pinkpop in the Netherlands.

The stems themselves were custom fabricated via Neg Earth who are also supplying the other fixtures on the floor lighting package including the Spikies, BMFLs and moving LED battens.