Robe moving lights were top lighting designer Crt Birsa’s spec for the recent 2CELLOS US which thrilled fans with a mega-mix of raucous rock, perfect pop, cool classical and melodic movie music as they worked their way across the country.

Luka Šulić from Slovenia and Stjepan Hauser from Croatia and their unique crossover style has put the often-underrated cello right in the spotlight! 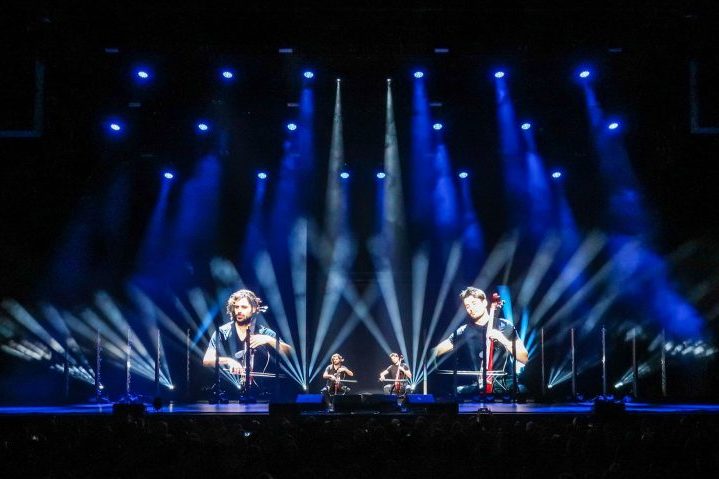 Crt, from picturesque Slovenia … has been lighting the band since 2014, when he was working as the production LD for Schengenfest, one of Slovenia’s largest music festivals. They liked what they saw and asked him onboard, which has opened the door to large scale international touring and some massive one-off shows in incredible places all around the globe.

“There is always massive scope for lighting 2CELLOs and being visually imaginative due to the vast range of the music” he commented. “Lighting is also an active way in which we like to help draw all the fans into the performance”.

The main moving lights on the US tour were 34 x Robe MegaPointes, 24 x Spiider wash beams, with five BMFL Spots for key lighting, all supplied together with other lighting kit by Upstaging, who have been a steady investor in the brand in recent years.

“Let There Be Cello” was a new tour but for continuity and some practicalities like a tight time schedule between the start of it and the end of the last tour, they used the previous touring lighting rig as a base design, freshening up with some new lighting and video elements.

The US tour was split into two segments covering mostly arenas in major cities and including some famous venues like Radio City Music Hall in New York, The Shrine in Los Angeles and Fox Theatres in St Louis, Detroit and Atlanta. 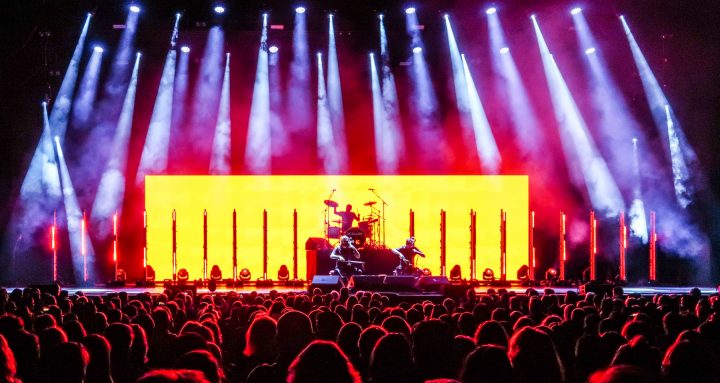 The technical design stayed straightforward and very versatile, leaving the stage space clean and uncluttered with Luka, Stjepan and Dušan Kranjc – the band’s drummer – as the focus.

They opted for long straight trusses with a series of drop-down bars to give some variation while keeping quick and easy to load ins / outs in mind, and new for this tour were 18 x thin towers, nine each side of the drum riser loaded with LED battens which merged into the LED screens upstage.

The back LED screens were on an automation system and could move position for variations and – in the lower position – to create some nice silhouetting effects.

Robe has been Crt’s moving light brand of choice for some time.

The brand is very popular in Slovenia – taking a large chunk of the moving light market thanks to a very proactive distributor in MK Light & Sound – and he appreciates the multifunctionality of the latest Robe luminaires like MegaPointe and Spiider and has always found them to be reliable.

Twenty of the MegaPointes were rigged on the three 18-meter wide upstage trusses – six on the drop pipes – with the other eight units on the floor behind the band.

The Spiiders were also positioned in a similar configuration, with six upstage on the floor. 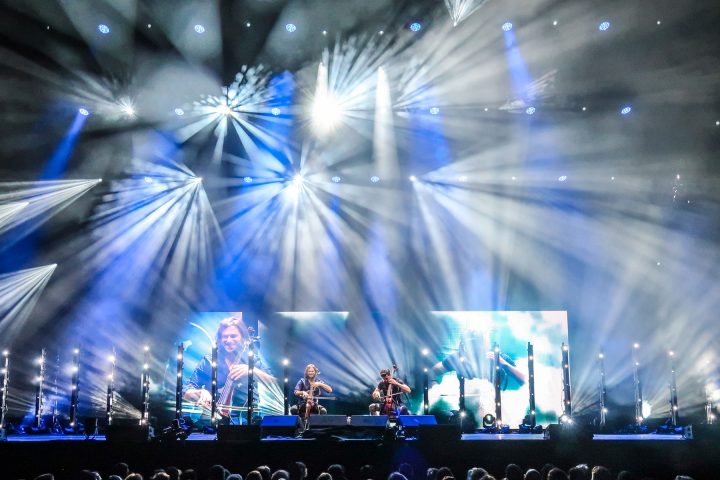 The BMFL Spots were on the audience / advance truss and were the only key lights in the show. Due to their extreme brightness, he could use them in color which worked perfectly for specific parts of the show.

Crt relied on MegaPointes for all the main lighting effects because “it’s basically a rock show that requires really good spot luminaires and MegaPointes can absolutely deliver this”.

He narrowed them down to work as beams for two or three numbers, but their fundamental function was as a spot fixture, and with so many options in spot mode, he didn’t need any additional units.

The Spiiders’ role was to fill and colour the stage and the air and provide a good background ambience for the MegaPointes.

In addition to these, he used the LED battens and strobes on the three upstage trusses which worked well with the MegaPointes during the rock section of the show as they energetically belted out a string of hits from AC/DC, The Rolling Stones, Nirvana, The Prodigy, Iron Maiden and others … on cello and drums … to the delight of fans!

As a tribute to all those legendary retro rock lighting designs, there were 16 x 2-lite Moles and six 8-lite Moles on the floor and in all the flown trusses.

Crt controlled all of this via his ChamSys MQ80 console, using an MQ100 Pro as backup.

During programming and operating, he works in tandem with video designer Zaor Kolar who is also mixing five cameras and the playback video. This ensures that all their energy gets offstage and out into the audience who receive the full and extended 2CELLOS experience!

Crt worked with two “fantastic” Upstaging crew chiefs, Ron Schilling on the first leg and Jim Fredrickson on the second. “Both have done so many much larger tours than mine, so I am very honored to have worked with them” he concluded.