For four days in late April, more than 3,500 visitors experienced a 35-minute art installation called “An Encounter with Lux Prima.” Conceived by Karen O and Danger Mouse as an immersive introduction to their new album collaboration, the audacious event — sixteen sessions in all — was held at the Marciano Art Foundation in Los Angeles. Audiences were fully enveloped by a custom-built spatial sound system from Meyer Sound, experiencing both music and effects ‘to the bone’ with infrasonic waves emanating from three VLFC very low frequency control elements. 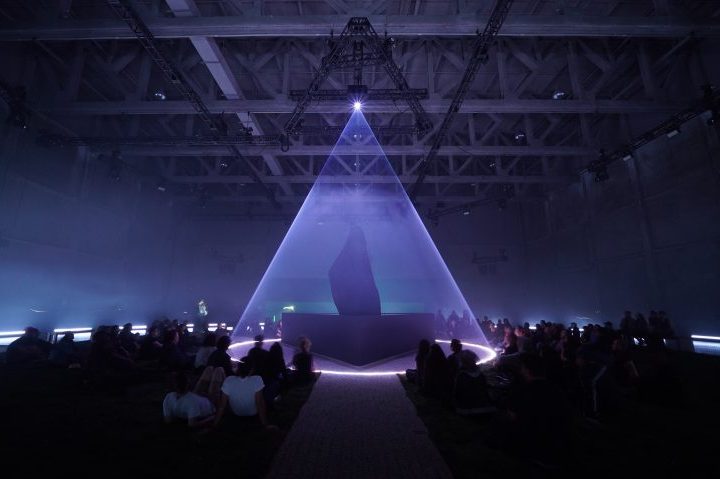 The formative concept behind “An Encounter with Lux Prima” was put forth by the artists as a means to involve the audience in the sensory and emotional content of the music in an environment that transcended the limitations of a stage performance. To carry their concept to fruition they enlisted a core team of collaborators that included — among others — creative director Barnaby Clay, producer Mungo Maclagan, sound designer Ren Klyce of Skywalker Sound (Star Wars: The Last Jedi, Fight Club), lighting designer Tobias Rylander, visual artist Davy Evans, as well as executive producers Like Mgmt.

“One thing we all had in mind going into this was that the music had to be the hero,” says Maclagan. “We absolutely did not want noodly ambience in the background that you get with some art installations. That meant we had to complement the music with imagery that was not dictatorial, so the power of the music would carry the story.”

To expand the stereo album music into a fully immersive experience, Ren Klyce was given the multitrack master files from which he created a 7.1 mix, augmented by additional object-oriented spatial sound elements. To extend the overall experience, Klyce created his own sound design elements as segues between songs.

Meyer Sound loudspeakers were employed during the creative process from the outset, first at Klyce’s own post-production facility, and again for the final pre-mixes at Skywalker Sound.

“Meyer Sound loudspeakers are very musical, which is what I personally like about them,” remarks Klyce. “In addition to their natural musical quality, they can get very loud but still feel pleasant. They are also emotional in the low frequencies with the VLFCs. When you want to have that soulful feeling in your chest, those speakers literally make you feel in with your whole body.” 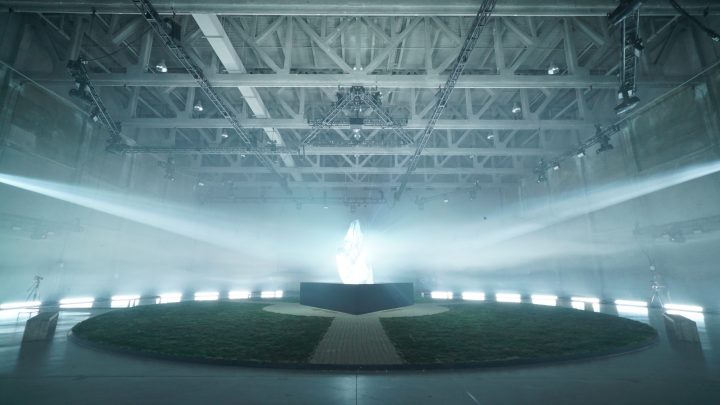 In parallel with Klyce’s sound design, the visual arts side of the team had sketched out an elemental design centered on a massive, irregular stone monolith sitting atop a triangular base. The audience would be seated around it on sections of real lawn, with dynamic lighting and mapped projections illuminating both the monolith and surrounding walls.

“As soon as I came on board I insisted this had to be a turnkey Meyer Sound solution,” emphasizes Long. “Meyer is the only company that could handle this kind of project with a fully integrated approach.”

Working in consultation with Meyer Sound’s Director of Strategic Applications Michael Maxson and Director of System Optimization Bob McCarthy, Long devised a tightly-packed LCR layout for each side of the triangular base. Twelve UPQ-1P loudspeakers supplied the full-range LCR program (one each for R and L and two for C per side), with an additional UPQ-1P overhead. Also packed inside were six 900-LFC low frequency control elements for deep bass plus the elemental infrasonic force of three VLFC very low frequency control elements. The four surround channels each employed two UPQ-2P loudspeakers.

Because the main scoring stage at Skywalker Sound is nearly as large as the event space booked at the Marciano Art Foundation, an identical system was set up there for the final pre-mix. Mungo Maclagan, Karen O and Danger Mouse were on hand for the sessions. 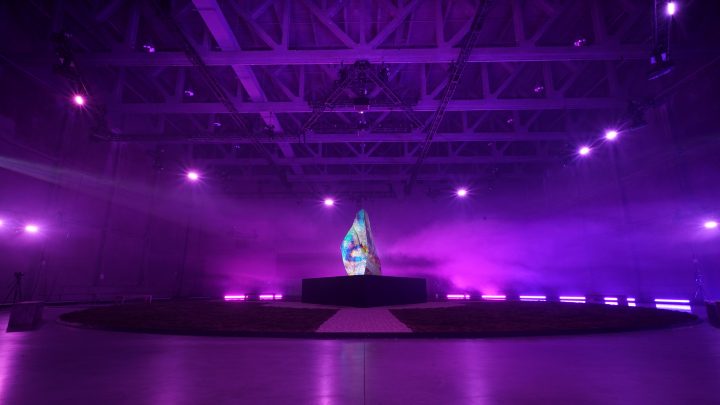 “We had listened to some of the other technologies when we’d visited Meyer Sound headquarters earlier,” recalls Maclagan, “but we didn’t hear the VLFCs until Skywalker. That was literally an earth-shaking experience. When Karen O and Danger Mouse first got their ears on the system, they were like kids in a candy store. The overall quality and fidelity really was mind-blowing.”

The music was then synced to the video and lighting effects, with the spatial sound movements and visual show control all directed by a D-Mitri digital audio platform as programmed by Martin Carrillo of Los Angeles-based Heardrum.

The final step was to set up all the audio and video technology at the Marciano Art Foundation, make some minor audio tweaks to adjust for differences in acoustics and room size, and finalize the show control by linking the entire “encounter” to three buttons on an iPad: Preshow, Show Go and Emergency Stop. The latter was never needed.

“The reaction was resoundingly positive every time,” says Maclagan. “Everybody was absolutely spellbound by the experience. The audiences were totally engaged throughout the entire 35 minutes. David Lynch came down for one show and said, ‘Wow, you’ve blown my mind.’ That was a high accolade indeed!”

In addition to the main system, a small pre-show system was deployed in the lobby area with four UPJ-1P loudspeakers. Prior to opening, an invitation-only live performance by Karen O and Danger Mouse for 400 celebrity guests was reinforced by eight MINA line array loudspeakers plus four 750-LFC low frequency control elements.