Jordan Rudess may be best known as the fleet-fingered synth shredder in prog-metal phenomenon Dream Theater, but he’s also an educator, sound designer, virtual instrument app developer, and tireless evangelist of the joys of learning to play. Yearly, he puts on KeyFest, an intensive three-day clinic for keyboardists of all levels of ability, at the expansive facilities of acclaimed retailer, Sweetwater. This year’s co-instructors included David Rosenthal (Billy Joel, Cyndi Lauper) and Latin jazz star Otmaro Ruiz. To hear and capture it all, KeyFest 2019’s live sound equipment was QSC—which, given the vast array of options available on the Sweetwater campus, is a testament to the brand’s performance and fidelity. Two clinician rooms were each outfitted with K12.2 powered loudspeakers for mains, K8.2 loudspeakers as monitors, and a TouchMix-30 Pro digital mixer to route and capture audio. To host KeyFest’s marquee performances, the larger Crescendo Club employed four KLA12 active line array cabinets and two KW181 active subwoofers as well. Rudess spoke to us about his sonic experience putting on the sold-out event. 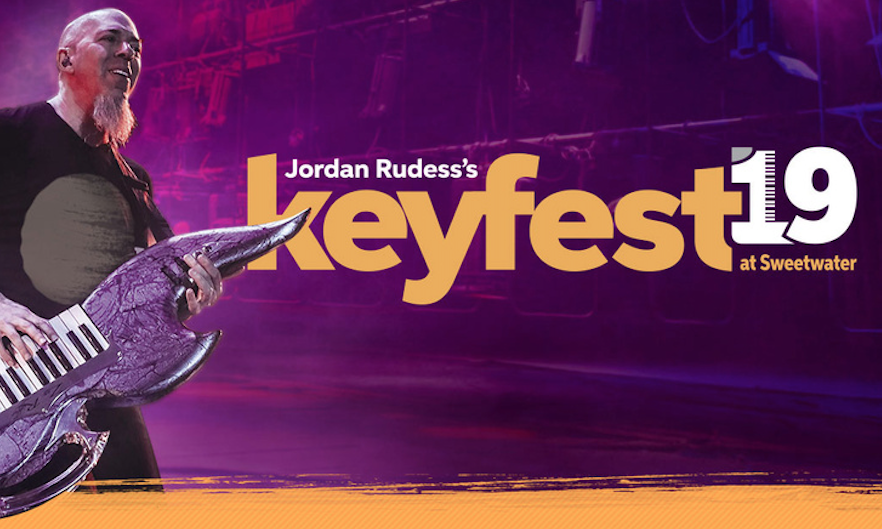 “I was immediately comfortable when I showed up and noticed all the speakers around us were QSC,” says Rudess. “Maybe that’s because Sweetwater knew I’ve endorsed QSC for a long time, or maybe it was just because they wanted to have really great sound.”

Rudess’ appreciation of QSC goes back “at least eight or ten years,” he says, “when I was traveling doing a lot of clinics. There was one music store in the Boston area [not affiliated with Sweetwater] where whatever speakers they had set up for my clinic didn’t sound very good. So, I asked them, ‘Do you have anything a step up from this. You know, something good?’ They brought out some QSC speakers—I think maybe they were the original model K10 or K12—and I was pretty blown away. I remember making a mental note of it, because I figured that at any music store I found myself at, I could just ask for QSC and be happy.”

Rudess recalls that at the next NAMM show he attended after that fateful day, “I went over to talk to them, and that’s when I became an endorser” – since adopting K Series, and later, the K.2 Series for all his personal use.

“I’m sort of obsessed with them,” he laughs. “At home, I have the K8.2s for practicing, then the K10.2s in the studio. I also have a pair of K12.2s that I take to rehearsals and writing sessions with Dream Theater. Onstage, I use in-ear monitors, but I use QSC speakers for everything else. If I’m doing a recording session, I’ll bring a pair to use as monitors in the tracking room.”

As to the loudspeakers’ performance under the demanding sonic conditions of  KeyFest, Rudess simply recalls, “Every clinic and performance sounded awesome. Even the smaller QSC speakers give you enough low end and punch that you can emotionally engage with playing, say, hard rock music. But they’re so musical that you don’t lose the nuance of softer passages, and of jazz and classical styles.” Though a newcomer to the TouchMix Series of digital mixers, Rudess praised its audio quality at KeyFest and said, “I thought it was really cool overall” and that he is “planning to really dig into it” after Dream Theater completes their summer 2019 tour of Europe.

“I’ve had a longtime love affair with QSC speakers,” Rudess concludes. “As a keyboardist and programmer that is unusually sensitive to sound, I know that my sounds are always accurately represented every time I use their speakers.”