Each year people flock to the Spanish island of Tenerife to enjoy the world-famous Carnaval de Santa Cruz de Tenerife, which this year featured an all Robe moving light rig of around 170 fixtures rig for the gala event to choose 2019’s Carnival Queen.

The Queen contest is one of the carnival’s biggest events, staged in the Recinto Ferial de Santa Cruz de Tenerife in front of a 12,000 audience the day before the street celebrations commence. It’s also broadcast live on regional and national television. This year it was lit by Juanjo Beloqui. 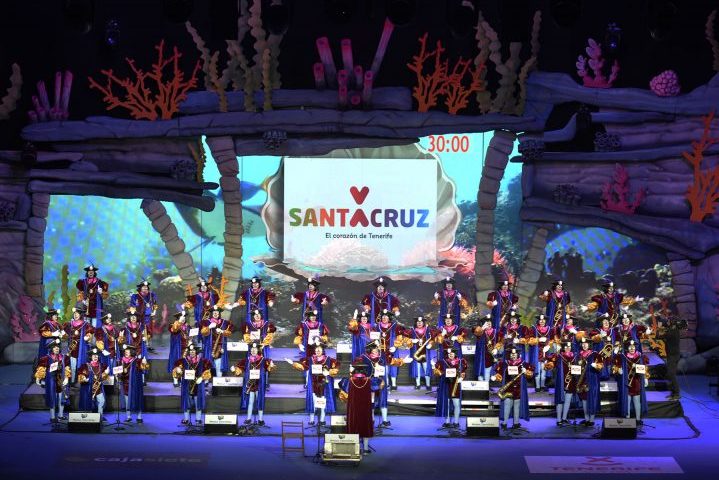 Juanjo has been involved with the event for the last four years, however this year he was the lighting designer for the full carnival, and his remit included the outdoor opening and closing ceremonies plus the three Queen contest ‘heats’ and the final competition and show.

A freelance lighting and visuals specialist with over 30 years of production industry experience, Juanjo was also involved in the Queen show’s custom video content creation – including sponsor stings, logos and play-ins. The challenge was creating a fabulous and magical visual ambience that worked equally well for the amassed live audience and all those tuning in on TV.

The Queen’s Gala stage was an impressive 80 metres wide by 28 metres deep – an expanse that was only just large enough to contain the glittering line-up of dancers, performers, singers and of course the 19 contestants, one of whom would be crowned Carnival Queen.

Each wore their own extravagant, original, individually named outfits, all completely unique and often several metres high, weighing many kilos.

Juanjo worked with set designer Javier Caraballero for the third year, and one of the starting points for lighting was the width of the stage. Other technical challenges included the venue’s flying capacities which were restricted, so Juanjo created a big back wall to support both the set and to provide rear lighting positions.

This meant he only had two trusses in the roof – a 60-metre-wide front truss and a 40-metre-wide mid truss which was split into three sections, with the centre run on vari-speed motors so it moved in and out. Due to the weight loadings, each rigging point needed a 4-way bridle to spread the load so getting them in the correct places was a tricky operation, and this also affected the height at which the trusses could be rigged.

The lighting equipment was supplied by rental company Sonopluss Canarias which has a large stock of Robe, supplied via Spanish distributor EES, and has made steady investments in the brand over recent years. Notwithstanding that, Robe is in any case currently Juanjo’s first choice of moving lights, so it was a happy circumstance.

On the front truss, BMFL Spots were used for key lighting and also for lighting and texturing the vast set with gobos, while the LED Wash 1200s covered the stage and large areas of set with solid colours.

The mid truss was loaded with Pointes, MegaPointes BMFL Spots and LEDWash 300s which were used for assorted beamwork and supporting the washes on the front truss.

The top layer of lighting along the back wall comprised BMFL WashBeams, MegaPointes, Tarrantulas and LEDWash 300s, together with more Pointes and MegaPointes that were embedded in the set.

LEDBeam 150s provided side and cross lighting and were also ensconced in parts of the set, and at floor level were more Pointes and LEDWash 300s.

This gave Juanjo a powerful arsenal of dynamic lighting tools all around the performance space.

The main ambient lighting instruments were the Tarrantulas which created effects on the stage, augmented with the BMFL WashBeams.

During the Queen’s Parade section of the show, two of the top-of-the-set BMFL WashBeams were used as rear follow spots, operated manually to back light the contestants, and all the critical upstage lighting positions were also covered with Pointes and MegaPointes.

With all these versatile fixtures, the beamy looks stood out dramatically and were very eye-catching.

Juanjo used the little LEDBeam 150s as side lights and admits to being “amazed’ with their punch and brightness! “The zoom is so good that I could go wide and cover much larger areas as needed” he explained.

He comments that with this many multi-functional fixtures, he effectively had a substantially larger rig than the 170 moving lights on the plot and was able to create no end of WOW-factor scenes and effects.

Juanjo is a big Robe fan and has been using the brand regularly in his work for the last four years, and right now, it’s generally his moving light of choice. He particularly likes the MegaPointe and the LEDBeam 150. “These two fixtures absolutely stand out and blow my mind” he declared.

For the Carnival Queen Gala, the set included seven different LED screens with a mix of 4-mm and 8-mm resolution surfaces, so this provided a lot of high brightness areas in which lighting had to hold its own. Utilising all these Robes he was able to create a nice harmony between the two medias.

In addition to creating a dazzling show, the other challenges were dealing with the enormous stage space with action happening all over it and the venue – including in the audience – and needing to ensure that the wide range of camera shots, often decided on at the last minute, were all well and appropriately lit for the TV director Jorge Salamanca.

The lighting design assistant and second operator for all the Queen contests was Juanjo Bleoqui Lopez (AKA Juanjo Bleoqui Jr) who is Juanjo’s son and himself an accomplished lighting professional. The video operator was Antonio Diaz from MiMart Studio. The lighting and video crew chiefs were Fabio Higuera and Hugo Casola respectively.

Juanjo comments: “It was great being back at the Carnival this year and we really enjoyed working with the team from Sonopluss again, whose staff and crew put 200% into this show year-on-year!”.