FOH engineer Bertrand Siffert (Montreux Jazz Lab) and monitor engineer Frederic Flori, aka Urbain (Woodkid, Jon Spencer’s Heavy Trash, Balkan Beat Box), have chosen a number of tools from Waves Audio — including the eMotion LV1 Live Mixer for both FOH and monitors, SoundGrid servers, and an arsenal of essential Waves plugins — for the 2019 tour of the Switzerland-based industrial rock band The Young Gods. 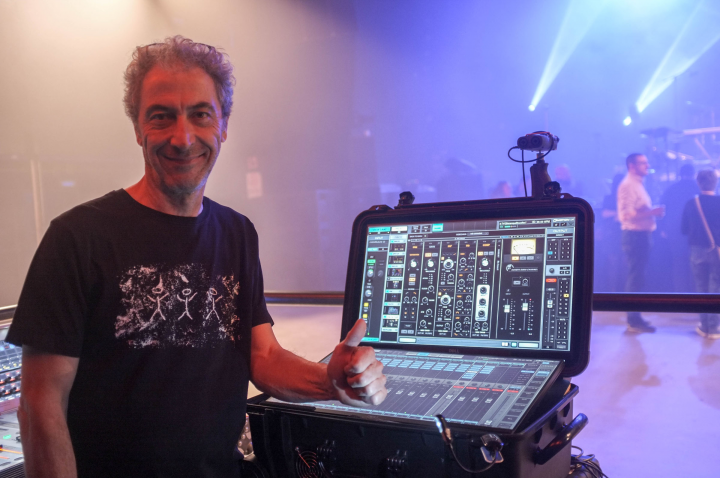 Siffert will be marking his 30-year anniversary with The Young Gods this September, having been the band’s live and studio engineer since 1989. “I discovered the eMotion LV1 mixer last year at the Montreux Jazz Festival,” Siffert says. “Waves EU Live Sound Sales manager Jessi Brustolin showed it to me, and it so happened that I was looking for a new live system for the Young Gods tour. Once I checked it out, for me it was the future of live sound. An all-software mixer, so compact and portable, yet so powerful, with all the plugins I want running inside the mixer itself—it was like a new vision of live mixing, with flexibility and powerful studio production capabilities.”

“The next step was to convince the band and management. I started off by explaining the benefits to Franz [Treichler, The Young Gods’ singer and composer], who immediately understood the possibilities of this magic tool. We installed the LV1 for one day at the Young Gods’ rehearsal space in Geneva, where we connected Cesare’s [Pizzi, The Young Gods’ keyboardist] instruments through a Waves SoundGrid driver (ASIO). The samplers sounded pure and great! Cesare knows a lot about computers and programming – basically that is his job – and he was totally convinced by this solution. Then we installed an LV1 at my home, so I could experiment and prepare it for the tour. It was super! I did my first show before the main tour, and The Young Gods’ manager, crew and families were there – and that was it: they were all convinced!”

“There are so many must-have Waves plugins that I use,” Siffert adds. “On vocals, I use a combination of plugins, getting the headroom that I need as well as a terrific wall of sound. My go-to plugins for vocals are the Waves Abbey Road Reverb Plates (which I use on drums as well); Scheps Omni Channel(perfect for lead vox); the Kramer Master Tape for that special stereo vocal sound; and the H-Reverb Hybrid Reverb for FX.”

“When it comes to drums, my go-to’s are the Renaissance Axx on kick and snare buss; the C6 Multiband Compressor on toms, the F6 Floating-Band Dynamic EQ; and the Manny Marroquin Distortion for that special kick sound. I use the Renaissance Bass for samplers specifically and sometimes on the kick drum as well; GTR 3 for FX and delays; and the GEQ Graphic Equalizer on the Master L-R samplers’ group. I could go on and on, there and so many other creative plugins – I can’t stop!” 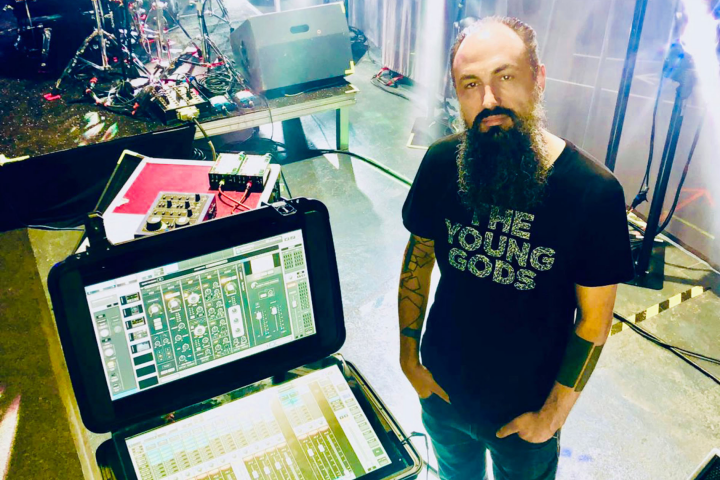 Monitor engineer Urbain adds, “The choice to go out with the LV1 was made by Bertrand at FOH, and since we are sharing the same stage rack, it made sense to go along with his choice to ensure the best compatibility and ease of workflow for both of us. I also have to say that the challenge of taking this technology out on tour and the possibilities offered by the platform were a big plus. My only special request was to have a hardware controller to be able to look at the stage at all times and have my most important channels at my fingertips without having to constantly look at my screens during showtime.”

Regarding which Waves plugins he uses, Urbain adds, “To help me deal with monitor differences and achieve as much as a consistent sound as possible, F6 Floating-Band Dynamic EQ is my tool of choice. Using it on my key channels like lead vox and samplers, once my monitors are tuned, I can tailor the sound and avoid frequency buildups in certain specific spectrum areas, to keep a clean and clear stage sound. I use the F6 for doing most of the treatment, following song by song, adjusting the frequency bands. I compress and reduce depending on vocal content. It varies quite a bit from song to song with extremely varied dynamic ranges (from whispering, to full on singing, to loud harmonica parts), and the F6 is a great tool for identifying buildups. Adjust to taste and keep those nasty hi-mid harmonics in check when the harmonica comes in.”

Urbain adds, “My vocal chain consists of the Waves eMo F2 Filter for HPF; the Primary Source Expander, which is great to reduce bleed on stage in the vocal mic, helping me and my FOH engineer achieve better rejection and gain before feedback; the eMo Q4 Equalizer as a basic SM58 response curve correction tool; and the Scheps Omni Channel, where I use the EQ section to further shape the lead vocal mic, and mostly use the de-essers, since having the possibility to have two de-essing bands, notch or shelf, is a great feature. Overall, I find it more musical and easier to work with than using the other de-essing options. I’m not going surgical with it, so it really is my go-to for these tasks. Also having the Input and Output sections on hand is a great help to achieve a good gain structure for the rest of my vocal chain.”

On choosing the Waves eMotion LV1, Urbain comments, “The benefits of using the LV1 is its portability, small footprint and ease of setup. Once this is done, I really love how the system sounds and what I can achieve on this tour, where we use house monitors that are really different from day to day.”