ADC is a full technical production rental company based in Zaventem near Brussels airport in Belgium, and is a recent investor in Robe LED moving lights with the purchase of 20 x Spiiders, 24 x Spikies and eight DL7S Profiles which were delivered by Benelux distributor, Controllux.

ADC was founded 27 years ago by Daniel van Ruyssevelt who is quite a character. The business started out specializing in the black art of large format projection back in the days of scrolling projectors, a field in which they excelled. When this discipline went digital, they upgraded all the technology and continued trailblazing the field. They were particularly strong in corporate and special events, conferences, and outdoor spectaculars and performances. 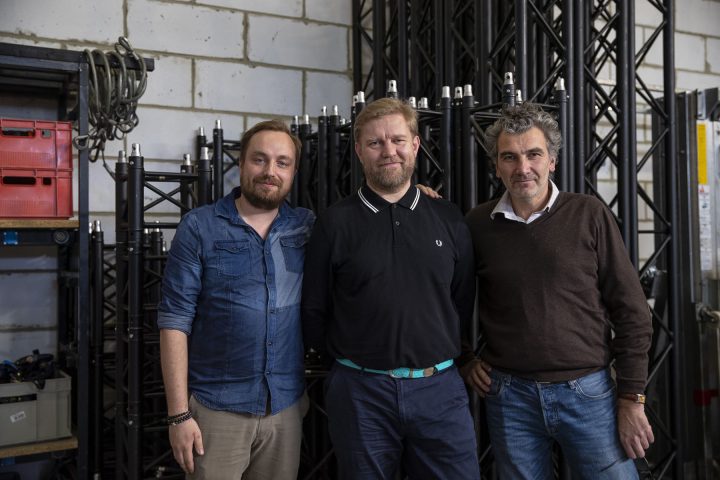 As the business developed, ADC found an increasing demand for providing lighting as part of a more comprehensive ‘visuals’ package, and then sound was also added to the production packages. “It made sense to integrate the technologies and offer a full-service option including lighting for the mid-sized work” explained Daniel, adding that for massive stadium-size shows and spectaculars… they will still typically supply just the large format video elements.

The initial lights purchased were generics, followed by the first generation of RGB LED moving wash lights when these came to the market around 10 years ago.

There’s been a lot of changes in 10 years, and in the last 12 months, the opportunity arose to put these original LED wash lights – not Robe – into a fixed installation, so ADC was ready for a fresh investment and a more contemporary LED moving light solution.

This time they looked to Robe.

Much of this was to do with the influence of lighting designer Jon Aasen from Desk Black Out who designs lighting for all of ADC’s large shows and also handles all their lighting investments.

Jon and Daniel have known each other and worked together for many years. With a big automotive show on the horizon, the time was ripe last year to make the new purchases.

Jon had been using Robe for some time in his work, especially industry standards like the LEDWash 600 and the first generation of Robe’s DL theatrical series – this was after first encountering Robe whilst touring with a band called CBX some years ago. “I really noticed the quality of those Robe fixtures on that tour” he recalls… “they were not so well known then… but I have used them frequently ever since”.

For the auto show that preceded the ADC purchase, they needed white light, so that was a major consideration in the choice. Both Daniel and Jon wanted to stay with LEDs for the obvious reasons – for corporates in particular, LEDs can bring considerably more value to the equation than discharge sources.

Before making up their minds, they rented a selection of moving lights and used them in situ on jobs. When it came to Robe Spiiders, Jon says he knew as soon as he fired them up in that they were THE lights for ADC. He marvelled at the brightness of the source even when zoomed out!

Jon also visited the Robe factory in Valašské Meziříčí and was impressed: “Having seen the processes at work and appreciating the precision and care involved in the production lines you understand exactly why there is so much consistency in Robe’s products”.

Once Jon and Daniel spoke to Controllux, they realized the pricing was very reasonable, so went ahead and ordered the 52 fixtures which were delivered as one package.

They went straight out on last year’s Brussels Motor show… and have been constantly in use ever since. In fact, every design that Jon specs now contains some Robe. ADC has been using the LEDBeam 150s as table centre illumination for gala dinners including at the Tour & Taxi (TNT) venue in Brussels, and Daniel is super-happy with all of the products and how they work.

“The service from Controllux has been exemplary” says Daniel, further highlighting the low maintenance of the fixtures which is helpful to any busy rental operation, which is also assisted by the sealed optics of the Spiiders and Spikies.