VIO Series is ready to provide the sound of summer 2019, with a rich calendar of events including: festivals, live concerts, exclusive evenings, leading artist performances and prestigious venue dates. Sound systems from dBTechnologies will be present across some of the most renowned Italian and international events. 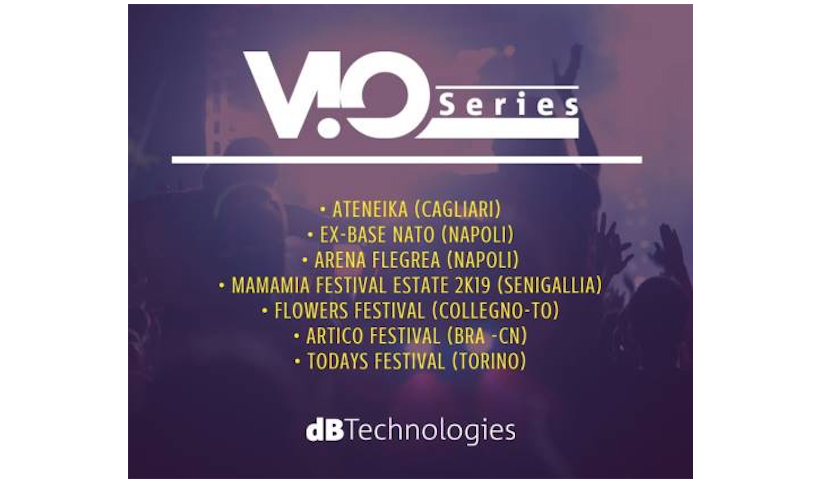 ATENEIKA FESTIVAL (Cagliari • from May 31 to June 9)

Ten evenings of live music and numerous events, hosted on one of the most beautiful islands in Italy: an award winning collection of the most prominent names on the Italian music scene and many international surprises.

VIO will be the PA of choice for Luché, Calcutta, Gazzelle, Carl Brave.

VIO L212 is PA for the entire season of Arena Flegrea, the most exclusive and prestigious venue in southern Italy. Highly anticipated performances include those from Skunk Anansie, Subsonica, Salmo, Ghemon, Ludovico Einaudi and many others.

On the outskirts of Turin, amongst flowers and live performances by the trendiest artists of the year: Ex-Otago, Chinese Man, Jack Savoretti, Rancore, Yann Tiersen, Ezio Bosso, Motta, Capoplaza, The Zen Circus.

Live music and dj-sets: a great party of music and good food in one of the most crowded areas frequented by music-lovers. VIO L208 is ready to support all the initiatives promoted by the Arctic Festival.

International and multifaceted: the festival that hosts Hozier is ready to receive thousands of people for the final days of the most fiery month of the year.