“People sometimes think that heritage is about looking in the rearview mirror, which it is, but you’ve gotta look through the windshield, too. It moves in both directions,” New Orleans Jazz & Heritage Festival producer Quint Davis said recently, celebrating 50 years of the iconic music festival better known as Jazz Fest. It was a fitting introduction to the “Relix Celebrates 50 Years of New Orleans Music and Culture“ exhibition, which opened April 26 at the  New Orleans Jazz Museum. 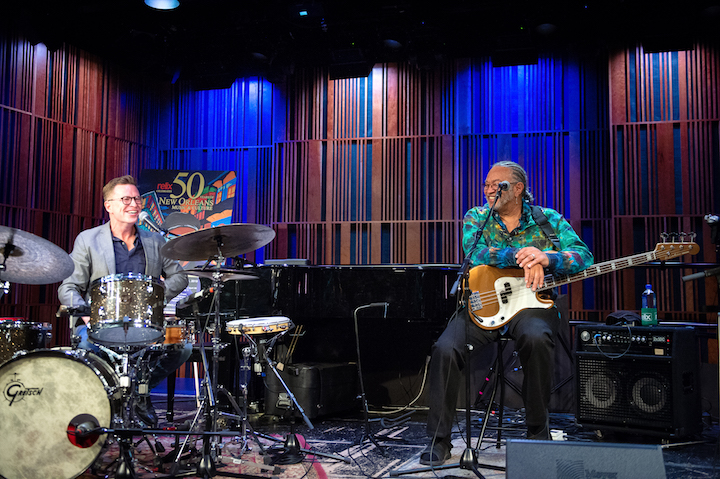 Meyer Sound provided sound for the exhibit’s installation and events, which brought together artists, photographers, musicians, and historians to explore the history of the relationship between the city of New Orleans and the New Orleans Jazz & Heritage Festival, examining ways the city and event continually influence and honor each other.

“We wanted to show the original reasons that the festival was founded, which were to preserve the heritage and culture of Louisiana music … that they’re still going strong 50 years later,” says exhibit curator Sam Sklover, manager of partnerships at Dayglo Ventures. “And that while music in the world evolves and the culture evolves, there is still a consistent thread that runs through it.”

The exhibit showcases iconic art and photography spanning five decades of Jazz Fest, spread across four galleries and accompanied by a soundtrack curated from the new Smithsonian Folkways collection  Jazz Fest: The New Orleans Jazz & Heritage Festival. “The wonderful thing about Jazz Fest is that there are so many senses and sensations that are a part of the event,” says Relix editor Dean Budnick. “What we wanted to do was bring together photos … and other facets of the totality of Jazz Fest, and put it all together.”

Meyer Sound systems help the exhibits provide a sense of experiencing Jazz Fest firsthand, says GregLambousy, director of the New Orleans Jazz Museum. “A lot of our equipment here in our state-of-the-art performance venue is provided by Meyer,” he explains. “We’re happy that Relix is also working with Meyer for our exhibit sound … the units that they have brought in bring almost a live experience to the sound in the exhibit.”

Sound in each space is provided by compact, discreet Meyer Sound packages comprising UP-4slim  compact installation loudspeakers pole-mounted on MM-10ACX miniature subwoofers, processed by Galileo GALAXY 816 processors. “The UP-4slim systems are a perfect fit for an exhibit such as this,” explains Matt Salerno, senior technical support specialist for Meyer Sound. “They fit perfectly into the corners of the rooms, they’re self-powered, and they provide great, even coverage to enhance the visuals.”

“Documenting an experience like Jazz Fest over 50 years is important historically, culturally, and visually,” says photographer and filmmaker Jay Blakesberg, who is featured in the exhibit, which also displays the work of Michael P. Smith, Syndey Byrd, Frenchy, George Rodrigue, Terrance Osborne, Danny Clinch, Zack Smith, Michael Weintrob, Dino Perrucci, Scott Saltzman, Clayton Call, Eric Waters, and Marc Millman. “I want my photographs to tell a story, and that’s what this exhibit does.”

“The music’s incredible, and of course it’s going through Meyer Sound speakers, and how can you go wrong with that?” he adds. “It truly is the best, cleanest audio system that is anywhere.” 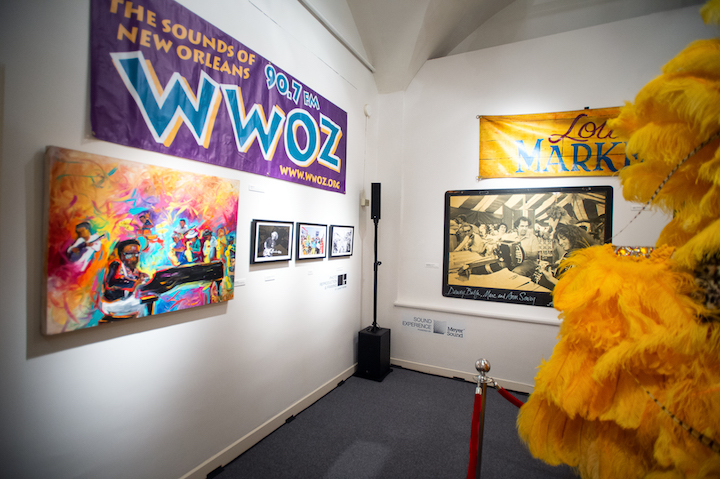 Through its installations and live performances, the Relix exhibition illustrated the power of sound and imagery to entertain, inspire, educate, and evoke the one-of-a-kind sensory experience that is Jazz Fest. “Between Meyer Sound’s powerful speakers that are really giving life to the exhibit … and the really great soundtrack that’s been provided to us, it really feels like you’re at the festival while you are in the museum,” says Sklover. “We’re really grateful to all of our partners for helping us make this possible, including Meyer Sound — because without it, it wouldn’t be as special as we think it is.”