Meyer Sound returned to Durham, North Carolina from April 25 – 28 for its second year as the Official Sound Partner of Moogfest, the landmark festival that brings together the most visionary and creative minds in music, art, and technology. This year’s expanded presence included providing multichannel systems for concerts, workshops, and technology demos at the festival’s anchor performance spaces, including the Durham Armory, the 21c Museum Hotel, and Fletcher Hall at The Carolina Theatre, as well as two installations at the Durham Fruit and Produce Company. Many of the events in these venues showcased Meyer Sound’s Spacemap™, which provides spatial mixing for any loudspeaker configuration. New user interfaces were developed for Moogfest to provide simple, real-time, spatial audio control. 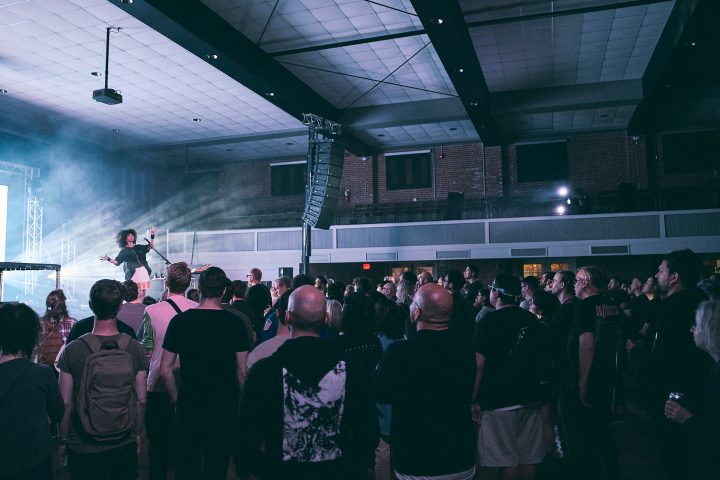 At the Armory, Ellison partnered daily with guest artists to demonstrate ways Spacemap can be used in real time. “We created sets that gave us a chance to, in a sense, create spatial duets,” explains Ellison, who improvised mixes that showed how spatial audio control could have the expressiveness of an instrument.

Composer and synthesizer pioneer Patrick Gleeson presented spatial mixes of new, largely improvised work in one of these sets. “When we’re in real life, all sound is spatial. It changes as you move and it’s changing constantly,” says Gleeson, adding that spatial sound is “going to change the way I write music. If I know I’m writing for 360 degrees, it’s a little bit different. There are more possibilities.”

Composer Jim Lang presented spatial mixes of various works including selections from his and Gleeson’s project :Jazz Criminal:, as well as a live improvisation. “Meyer gave me an opportunity to experience music that I’d made over the past ten years in a completely different way,” says Lang, who is perhaps best known for his work scoring the Nickelodeon series and movie Hey, Arnold!  “As a film composer, I get to work in 5.1 … but a lot of the time I’m not getting to use the surround sound as a musical element, as a compositional element.”

“I really hope that spatial sound can be a part of any live performance that I do from here on in,” Lang continues. “That seems like a grand thing to say but really, once you’ve experienced it, it’s hard to think about just doing stereo anymore.”

Meyer Sound systems supported three nights of performances at The Armory, The Fruit, 21c Museum Hotel, and the Carolina Theatre, powering the musical expressions of artists including Matthew Dear, Max Cooper, Kimbra, Craig Leon, Mount Kimbie, JLIN, A Place to Bury Strangers, Richard Devine, and Juan Atkins, plus an epic DJ set by Questlove. The systems incorporated both D-Mitri and Galileo GALAXY signal processing and a wide range of Meyer Sound loudspeakers including the recently introduced USW-210P compact narrow subwoofers at each surround position as part of the six channel system in the 21c installation and twelve UPQ-D3 ultra-wide coverage loudspeakers in surround positions at the Armory as part of the venue’s 14.4 configuration.

Performances celebrated spatial sound’s potential to energize live audiences and make them feel closer to the audio experience and artists. “There are so many things about 3D sound and spatial audio that are really important, but the main one, I think, is for people to really feel the music in a different way,” says electronic trip hop artist Sofia Hultquist, a.k.a. Drum & Lace, who performed a spatially enhanced set at 21c. “It just adds a whole new dimension; I think that it’s going to do nothing but elevate and expand on my music, and on music in general.” 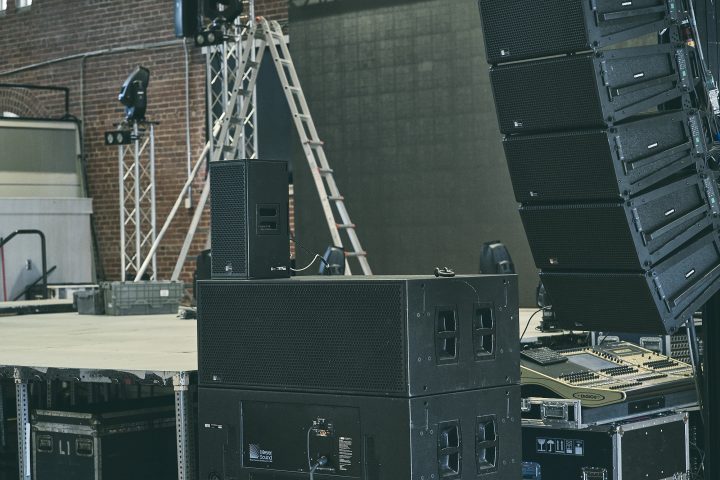 Collaborating with artists on-the-fly often led to profound “aha!” moments, says Ellison. “In the Max Cooper concert, there were times when we moved the entire mix out to the surrounds and brought the energy out and around the audience, and then when the beat kicked back in, moved the mix back to the arrays to draw focus back to the artist. As the energy increased, we could slice out part of the sound and pulse it out to the room in time with the music. We could sense the excitement from the audience from this evolution of the mix.”

Ellison says the best part of partnering with Moogfest is being able to collaborate with artists and mixers to push the envelope of live mixing and, sometimes, incorporate updates overnight. “It’s like a lab venue for artists to explore their craft in a new way and for us to look at technology that has been supporting systems and shows throughout the world for years in a new way,” he says.

Moogfest’s CEO Gillian Ryan reflected on the partnership between the festival and Meyer Sound that has created new opportunities for both artists and attendees. “Moogfest is the culmination of technology, future thought, and music. Meyer Sound, our official sound partner of 2019, synthesized these ideals through their high-end audio systems throughout the festival. This did not go unnoticed to our audiophile crowd,” says Ryan. “The spatialized Meyer Sound systems in the Armory, 21c, and Fruit Black Box provided incredible, interactive experiences that enlightened the artists that performed and the fans alike. Meyer Sound understands the importance of quality in the live experience, and I look forward to continuing our partnership into Moogfest 2020.”

Moogfest celebrates synthesizer pioneer Dr. Robert Moog and the influence his inventions have had on the way we hear the world. The festival, now in its 15th year, explores the intersection of art and technology through musical performances, visual art exhibitions, interactive experiences, discussions, and film screenings.