Dweezil Zappa knows a thing or two about guitar. Steeped in music since early childhood thanks to his father — virtuoso rock guitarist and maverick composer Frank Zappa — Dweezil’s own illustrious career has become the poster for an encyclopedic knowledge of technique, tone, and gear, bolstered by the perfectionism and work ethic that famously runs in the family. From his solo work to his tribute project encompassing his father, Frank Zappa’s Astounding Compositions, to his upcoming tenure on the 2019 Experience Hendrix tour, Dweezil has relied on QSC powered loudspeakers to recreate iconic guitar tones and craft entirely new ones. In his latest stage rigs, these include multiple K12.2 and K10.2 cabinets. 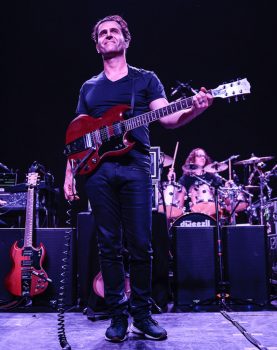 “I first discovered QSC close to 11 years ago,” recalls Zappa. “I had started using and the Axe Effects digital modeling devices from Fractal Audio. The Axe Effects was designed to work with full range studio monitors for direct recording. On stage I needed to be able to make that transition. Most of the wedge options at the time sounded either too hyped or too compressed to me. Then I tried QSC — I think I started off with the KW Series — and they had the flattest frequency response and the sounds I programmed in the studio translated without any issue.  In this genre of powered stage monitors, the QSCs gave me the home base I’d been looking for. The low frequencies stayed tight at loud volumes and the cabinets didn’t rattle like others I tried. I like that the guitar felt natural and responded musically to proximity feedback. All of those details plus considerable headroom made the QSCs the best fit for my performance needs.”

Zappa goes through a meticulous process of “R&D” when creating guitar tones for a concert. “If I’m doing songs from my dad’s records, I tend to examine the guitar tones down to the DNA level and recreate the different layers he built. Because I grew up watching him work in the studio and onstage, I developed a pretty good understanding of what he used and how he used it. For other artists like Jimi Hendrix, the process is pretty similar. I research what was used and how it was used and I try to digitally recreate that signal path. I still incorporate analog pedals in my guitar rig and that does make a big difference in feel and tone. Once I have an idea of what I’m trying to recreate, I’ll start listening to the character of the original recording— from CD or a file on my computer — through the QSC loudspeakers. I’ll listen for the character-enhancing studio elements added during a mix, such as compression and EQ, since those may be different than the initial raw guitar sound. Then I’ll start to make a preset to match it on the modeling amp, and I can A-B my guitar with the record to be assured of consistency. To be able to analyze a mix and then audition a solo instrument through the same speakers is a big advantage. You can’t do that with a conventional guitar cabinet because it cannot reproduce the frequency response needed for an album mix.”

Consistency and full frequency response are also important because of the sheer number of variables in a Dweezil Zappa show. “My onstage rig can get pretty extreme,” he laughs. “I use two Fractal AxeFX III units in autonomous signal paths, each of which has two stereo output sections. Within that I can access four amp sources and speaker models plus multiple direct audio applications, like a DI. I also use pedals — a set of five or six different effects feeding each Fractal unit, then  they come together into a path of about 8 more pedals that feed both Fractals simultaneously. I like to blend wet and dry signals like you would in the studio with faders on a console. So there are a lot of presets that have flexibility with panning and volume control for clean and dirty combinations. The super clean and compressed DI sounds would not have the same character in a regular guitar amp nor would the piezo acoustic sounds from my guitars. So once again the QSCs sounded better and also took up less space. I have different sized rigs that I used for different tours. Since it is very expensive to ship gear around the world I sometimes use a mini rig in Europe and Australia. I sometimes feed a pair of K10.2 speakers when we are on a tighter budget or in smaller venues. In larger ones, I prefer to monitor through two sets of K12.2s in a sort of quad-surround setup.”

QSC’s reference-grade monitoring is also necessary because, as Zappa notes, sometimes the realities of live performance require deviating from the recipe of the original recording: “In Zappa Plays Zappa, for example, tunes are tightly segued together and there’s not always time to change guitars. So I might be playing a set on a Gibson SG where my dad might have used several different guitars on those songs. I use the effects and modeling to get as close to the original guitar sounds as possible, even if I’m playing a different type of instrument. Any coloration introduced by traditional guitar speakers would get in the way, whereas the K.2s again give me accuracy and consistency.” 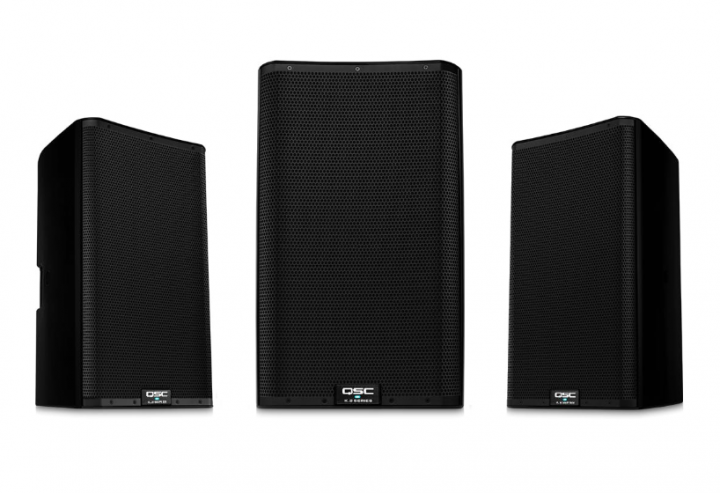 Asked for his take on how some guitarists criticize general-purpose speakers for lacking the response and soul of classic guitar amps, Zappa offers, “That’s a rabbit hole. To me if something sounds good and helps me play better, it’s the right tool for the job. Sometimes people romanticize gear in a nostalgic or snobby way but it just comes down to your own ears. I have had great experience with QSC loudspeakers. If I want natural feedback, I can stand with the guitar in front of the speaker and it behaves just like an amp. I pick a string, and I hear and feel a punchy response through the QSCs that to me, feels commensurate with plugging directly into an amp and a cab. If anyone is having a latency problem, it may have more to do with latency in your modeling system or somewhere upstream of your monitors.”

Gig after gig, Dweezil finds his QSC speakers to be as accurate as studio monitors, only with the power to perform onstage. “All these nice 3-D sonic images I can create translate really well to our finished recordings. We’ve recently been able to make live albums right off the front-of-house console, and they sound like a finished record from the studio. The QSC K.2s provide the core reference for that. At the end of the day, the QSC monitors can do everything a guitar amp can — and everything a guitar cab can’t.”