One of the most used, yet perhaps the least understood option on stage lighting consoles has to be the effects engine. In this article we are going to explore how effects are handled by some of today’s most popular consoles. When the first effects engines became available, they quickly became the most overused options you would see in various light shows. The Wholehog II was one of the first desks that featured these complex abilities. The issue was it seemed at most events, you would consistently see the same basic circle effect with very little variation between them. It was definitely a luxury to select lights and simply press a button for movement so it was hard to resist and I certainly was guilty myself of perhaps over using it.

Before effects engines, if you wanted your moving lights to make circles, you had to meticulously program several cues (or steps) in the desired pattern and then convert them in to a chase where you really only had control over speed.

Modern effects engines make it easy to quickly apply advanced algorithms that manipulate parameters such as movement, color and more. There’s little doubt that these options save hours of programming time and they give the programmer unique control of their lights. 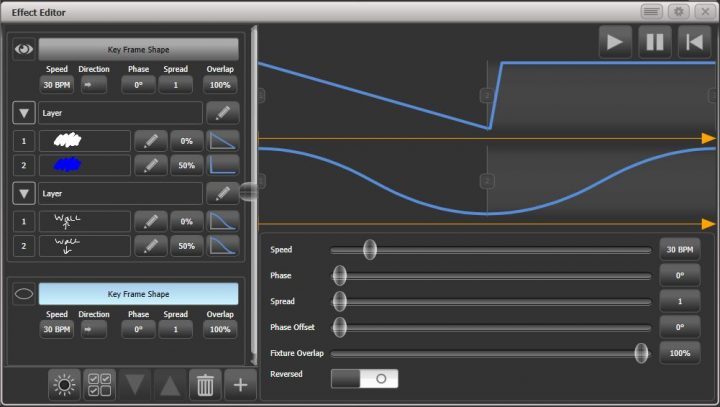 Rate, size and overlap options offer endless variations when creating unique lighting cues that will dazzle your audience. You can also get an increased variety of effects by utilising selection order. 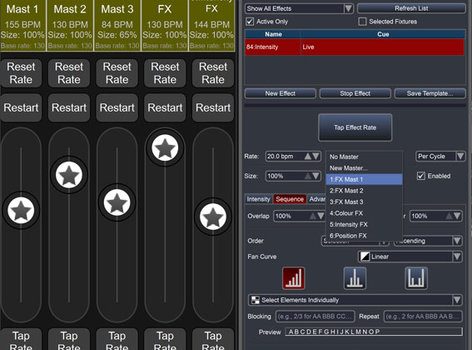 Another useful feature is fanning while using selection order (most consoles now recognise your selection order), which along with overlap allow the user to create even more spectacular cues.

You can see an example in the image above, where you have three different buttons for fanning your selection. You can choose if an effect starts from the left of your selection, the centre of your selection or from the outside to the inside of your chosen group of lights. So if you select fixtures 1-6 and apply each of these fans, you see completely different results. Then try selecting 6-1 and take note of the results. Next select the order 1, 5, 3, 6, 2 and 4 and now you have an offset for your effects.

On most consoles, you can save your settings to a pallet button for quickly applying the effects to various fixture selections. Another popular option is creating a master speed control that you apply to a playback for manipulating effects on the fly.

If your console doesn’t have the master speed playback option, see if it has the option to fade all parameters. Some desks call this feature crossfade IFCB (Intensity, Focus, Colour and Beam). With the crossfade on all parameters selected, you have direct control of your FX cues so that the fader manually manipulates the size and speed as needed.

All of this points out that it is helpful to consider how you want your effects to be played back. The idea is that you can playback one effect cue at a time, or you can also manually control your parameters as in crossfade IFCB, or you can activate multiple cues with multiple parameter changes all at the same time.

As you can see, these are very powerful options and console manufacturers are constantly upgrading the effects engines on their desks. With many recent updates these programming options are more complex and more useful than ever.

I asked for descriptions from various console manufacturers about how they are handling effects in their newest software. This is what they had to say. What’s new for effects in the GrandMA 3?

Phasers are the next generation of creating motion on stage! We’ve combined grandMA2 Chasers and Effects in to a singular engine called Phasers. We’ve also streamlined the creation and management of your Phasers by integrating them with existing static Attribute control. You can add motion to a static look by simply applying a value to a second step, third step, and so on up to 255 steps. Each step gives you access to granular form and transition control. This all adds up to why Phasers are incredibly powerful, quick to setup, and represent another leap in innovative show control from MA Lighting. 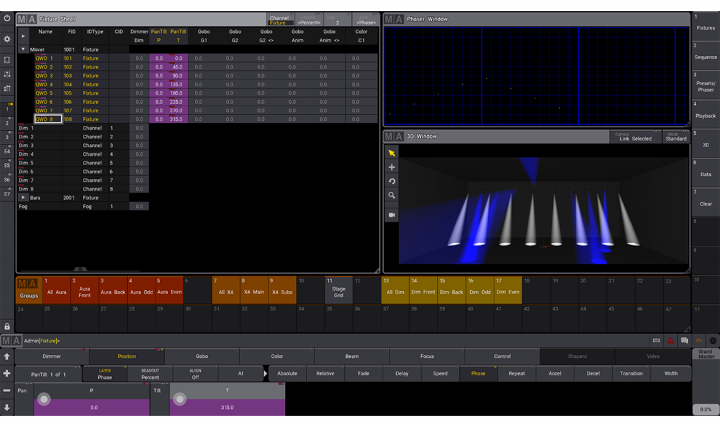 GrandMA 3 description from Will Murphy with A.C.T Lighting, Inc

What’s new for effects in the Wholehog 4?

The Hog 4 effects are in essence the same effects that were introduced with the first Wholehog console and became industry standard with the Wholehog 2. The system is based on mathematical tables applied to parameters at a base point (so point lights at a spot on the stage and apply math to pan and tilt that will move those parameters dynamically around that base point.) The type of math table you choose creates the kind of dynamic movement you want. This style of effect can now be found in many manufacturers’ products, as it is simple to use and highly customizable. The Effects Spread function makes it easy to offset fixtures with respect to their selection order and the segments and buddying settings. Recent enhancements to effects in Hog 4 include the ability to choose when and how effects might synchronize with others and the addition of a short, simple command to create an effect that runs between two points. 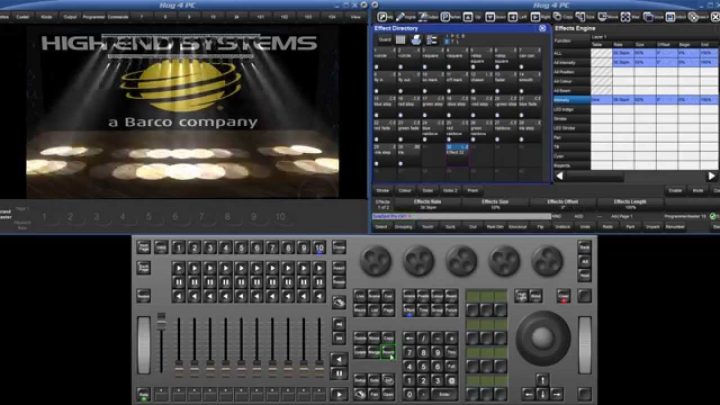 What’s new for effects in the Jands Vista 3?

Continuing Vista’s visual approach to lighting and media control, Vista’s effects engine is designed to be simple yet still powerful enough to create any type of effect.

Combining Vista’s, intuitive, graphical user interface with a true generic fixture model means that you can continue to define your target effect visually. There are no confusing tables of numbers, degrees or fractions. Vista does all the math for you, providing creative flexibility as you have more time to concentrate on creating great looking shows.

All of the effect parameters you are likely to need are placed at the very top level of the effects editor, without needing to dig through multiple menus. Everything is clearly laid out, right at your fingertips. For example: changing the order or direction of an effect is a simple click. If you need to set a rate quickly, enter it in BPM or simply tap the tempo right from within the editor. In addition to being able to create effects by modulating waveforms over parameters, Vista also lets you create effects based on steps, called swings.  These swing points can alternate between any parameter, they can also reference any presets that you have built in your show. There is no limit to the number of swing points within an effect. This means you can swing between 2 colours, or perhaps 20 if you wish. Alternatively, you could swing between downstage, upstage, crowd and roof as a position effect.

Swing FX allow you to easily transfer, and program, the creative effect ideas that you have in your head into the console.

Multiple separate effects can easily combined within a single effect to create advanced stage looks. Vistas graphical representation of each individual FX part, and the ability to visually drag each to adjust, ensure that you can intuitively create even the most complicated design ideas, retaining the power to control the finest details.

Vista’s fixture handling understands that a single fixture can have multiple elements (or pixels). Vista’s split/group toggle button either tells all of the pixels within a fixture to be controlled as one, or individually.  This feature can also be utilized within the effects editor, eliminating the need to create custom groups, or use confusing selections, when you simply want to run an effect over a multi-element fixture as a whole. This feature drastically reduces programming time when you are running effects over various fixture types.

Powerful FX and animations can be pixel mapped directly from Vista, allowing users to create fantastic looking shows without the need for additional third party software or hardware. Users simply drag and drop fixtures into the matrix to represent their physical real world locations, Vista then automatically handles the rest. Blocking values allow you to easily group fixtures together, whilst repeat values let you define the effect repeat cycle. The easiest way to explain this is in text form, A,B,C,D, where each letter is a new fixture. An effect might run as AA,BB,CC,DD, this would use a block value of 2.

If an effect runs AA,BB,AA,BB, this would use a block of 2 and a repeat of 2. Many consoles have this functionality but Vista takes it one step further and allows you to add custom divisions to your blocking and repeat parameters.  For example, in the blocking field you could type

4/2/3/1  which (with no repeat set) would result in AAAA,BB,CCC,D.  This is incredibly useful if you have, for example, several trusses with staggered counts that have more on one truss and less on others, once again reducing programing time and simplifying the user interaction.

An unlimited number of effects masters can be created, and assigned, to the rate and/or size parameters of an effect.

Once created FX Masters can easily be assigned to fader playbacks by simple drag and drop actions. The same can be said for setting master button actions such as “tap rate” and “reset rate”. Effects masters provide fast, yet accurate, hands on control, allowing you to adapt to any live show scenario. 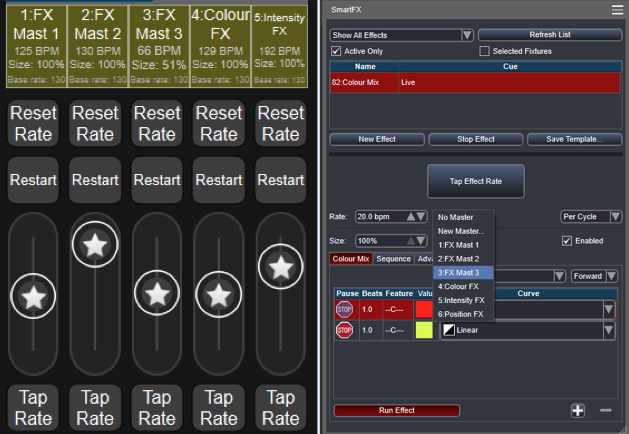 All effects can be saved as user templates to be used again at a later point in time. Vista’s generic fixture model means that ranges between fixture type for most parameters eg. zoom / strobe / colour are the same no matter which fixture you swap to. This allows these effect templates to also be used on completely different fixture types, or even in a brand new showfile. This functionality provides users with the ability to producing stunning looks, within seconds, with no additional pre-programming required.