Nearly 300 Robe moving lights were utilized by lighting designer Žiga Krajnc for the 2018 Noč Modrijanov event, a major televised Slovenian folk festival staged biennially, and this time around at the Dvorana Zlatorog Arena in Celje, directed by Marjan Kučej. 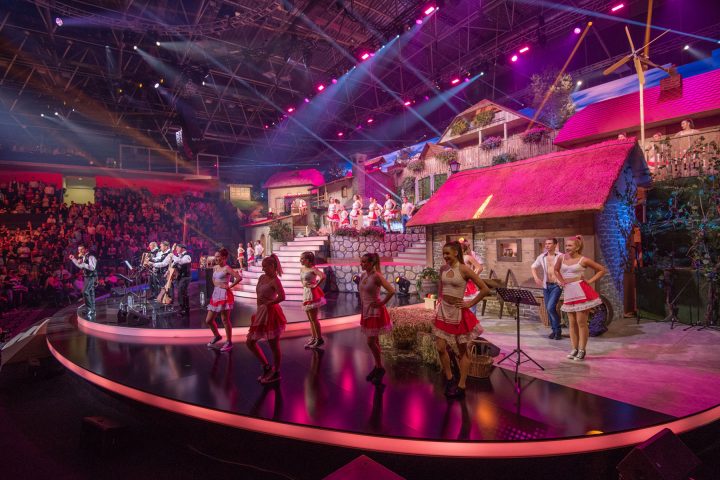 Over two days, around 100 different Slovenian singers, folk troupes and dance ensembles presented a range of pieces that were enjoyed by around 12,000 people watching live as they performed on an elaborate scenic stage designed by a collaboration between Andrej Šifer, Miha Prosen and Blaž Podpečan, which depicted a typical Slovenian village.

The shows were recorded and broadcast on Slovenian national television’s RTV1 channel in the first week of the new year, so lighting – supplied by rental company Event Lighting –needed to work live and on-camera.

Ziga has lit the event twice before, and this year his brief was to highlight the set – comprising seven different styled Slovenian houses, a town hall square and other traditional village landmarks – in two different base lighting states – daylight and night. This was to be applied according to the show script.

On top of this he was able to layer effects, texturing and a variety of looks and scenes adding the appropriate drama and emotion.

“I needed to have as much scope as possible and that’s why I chose all these different Robe fixtures” he stated. 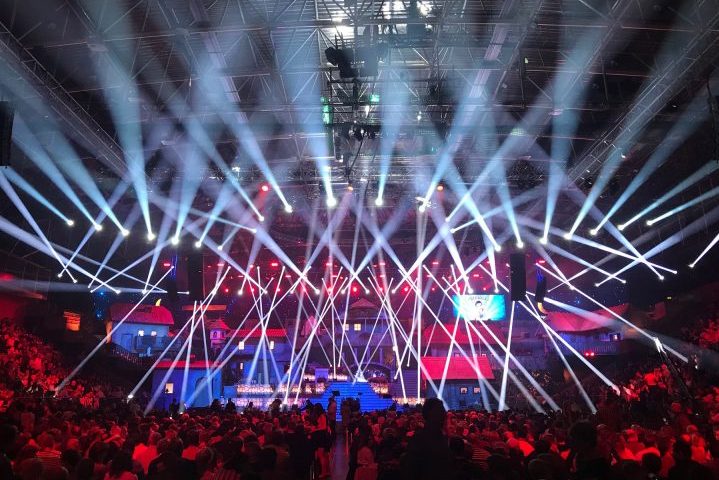 These were dotted over a series of trusses installed in the roof and each fixture was used extensively to light the show. “The set contained a massive amount of detail that needed to be picked out” explained Ziga, and that was one the challenges facing him and programmer Matija Kacin.

“With that many Robe fixtures I knew that I could cover everything well and had many options to ensure that each section of the performance looked different and interesting”.

Ziga – one of Event Lighting’s full-time designers – has been working with Robe products for over 10 years. He finds them reliable, interesting and well featured with a good output, and he appreciates the colour compatibility between all of them, especially in the LED ranges.

He was keen to use Event Lighting’s new MegaPointes on a large stage… and this was a great opportunity! The 22 x BMFL Blades were used for key lighting on the main performers, while Spiiders covered another 10 primary positions.

The only other lights on the rig were some blinders.

Over 300 metres of trussing were installed in the roof by the Event Lighting crew and the fixtures were deployed all over this for best possible coverage of the stage area. 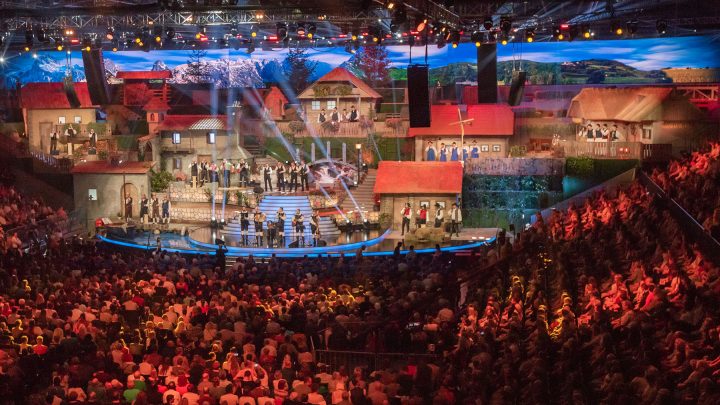 The longest truss curved around the back of the stage, and this, together with the two middle trusses, was mainly used to rig all the effects lights – MegaPointes, Pointes, plus some of the Spiiders which were pixel-mapped.

A circular truss and two finger trusses were used for the key light fixtures and for positioning some secondary effects lights. A single BMFL Spot upstage centre was used as a back follow spot, operated remotely via a RoboSpot BaseStation.

There was also a large circular truss flown above the audience, used for wash lights – Spiiders, LEDWash 600s, etc – to highlight the crowds for the broadcast and for some specific key lighting.

Several lights were positioned all over the stage floor and around the set for picking out the finer details and providing camera candy.

Ziga and Matija both ran lights for the shows using one of Event Lighting’s new grandMA3 full size consoles in the session together with a grandMA2 light console.

Their challenge was to programme numerous different settings for the diverse mix of artists, however, with this many Robes to hand they were able to deliver an eye-catching show for both the live audience and the many hundreds of thousands catching it on TV.