Grant Smith joins the Robe UK team as sales manager for the north east of England, a territory covering from Manchester to the East coast and from the Scottish borders down to the midlands.

Based in the vibrant and ideally positioned urban hub of Leeds, Grant will be on the road much of the time getting out, about and amongst Robe’s current and future contacts, customers, end-users and fans, seeing and appreciating their work first hand, cementing existing relationships and making new ones. 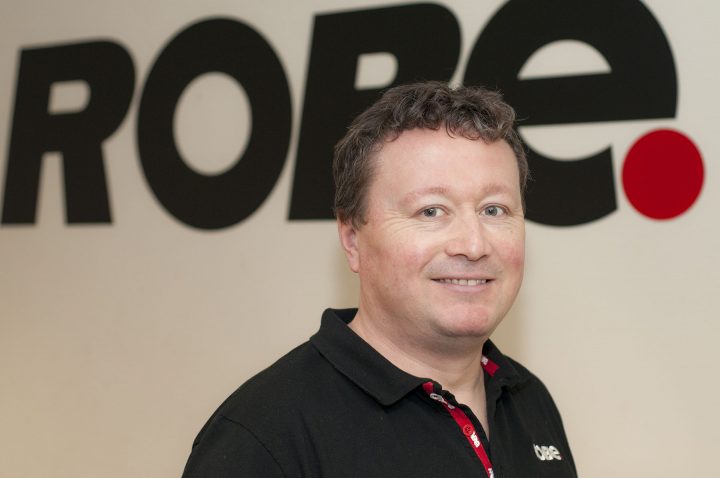 He will be complimenting the already very proactive work of Robe’s Ian W Brown, Bill Jones and Ashley Lewis, and Robe UK MD Mick Hannaford is “delighted” to have him onboard.

Grant studied English Literature at Liverpool University and enjoyed several summers of work experience rigging stages and roofs at festivals and events all around the UK!

A chance meeting with a production manager in 1998 led to a job with Jon Bray at Summit Steel for a couple of years, and he also worked for award winning lighting rental Neg Earth for 18 months, before moving to AC Lighting… where he remained for nearly 17 years.

After this long stint in one place, it was time for a change! Grant also wanted to be out and about at the sharp end of the action rather than office based… so the Robe opportunity presented itself at a great time.

Having been a Robe customer for many years, he’d also visited the factory in the Czech Republic and been suitably impressed by the company and set up. “Everything about Robe’s ethics and ethos made it an easy decision” he stated enthusiastically.

He’s looking forward to championing the work of his customers outside London and in the provinces and ensuring that more attention is given to their innovation and endeavours. “The industry is not just based in London, and there are many talented companies and individuals locally who provide fantastic products, services and events all over the country and particularly in ‘The North” he explained.

He thinks Robe is a “high performance, reliable and popular choice for long term lighting investments and there’s a lot of positive energy surrounding the brand”.

Having cut his teeth on site and up trusses and structures on the festival front lines and working for busy rental operations, Grant has the empathy and a real understanding of the pressures and realities of entertainment technology and technical production, and these qualities make him a perfect pick for Robe.

He’s not going to have a lot of spare time in the new role, but when it does materialize Grant enjoys cooking, hiking with his partner and Jack Russell terrier, reading and sport. He’s completed several half marathons and 10k runs for charity.