Stereophonics released their 10th album last year, Scream Above The Sounds, which comes almost 20 years after the Welsh rockers first stormed the BRITs back in 1998, and won the award for British Breakthrough Act. The band’s touring team are dedicated to delivering perfect sonics, and this has led to seriously heightened production levels, which is being driven by a brand new Optocore system. 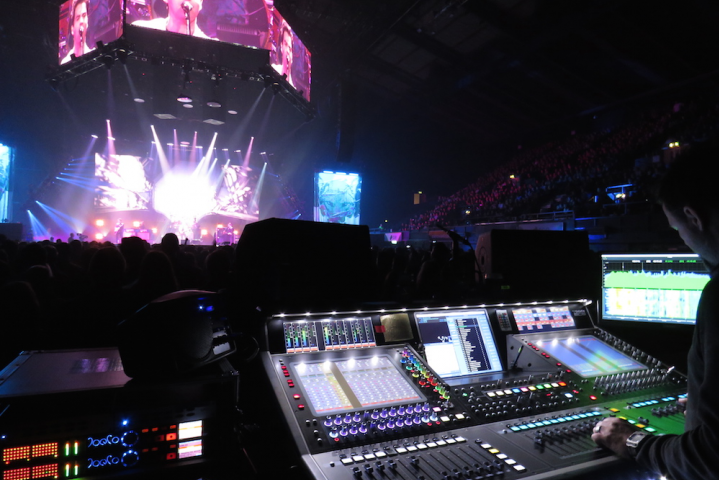 Sam Cunningham is in charge of all things systems for this tour, and says it’s been another hugely successful album campaign; Scream Above The Sounds is the band’s 10th record in 20 years. That really is extraordinary longevity.

“Since I have been with the band, I have constantly pushed for the modernisation of the audio systems we use for our live shows,” Cunningham explains. “So much has changed since my first show with the band back in 2015; we had an antiquated split system with a massive amount of Digidesign Stage Racks, as we were over 48 channels with a Profile surface at FOH and monitors.

“The stage package was bulky and inflexible, and we also had countless analogue and AES lines running to and from front of house and stage. Solutions to patching problems were usually resolved with copper, and a spaghetti of analogue cabling: simple things like talk mics and shout box outputs necessitated a myriad of link cables from surface to rack – to panel – to splitter – to multicore, which usually then ran under 100 metres of muddy field. Things were slow and difficult, and often left me dealing with problems one simply doesn’t need when trying to get a band onstage for a headline slot.”

The monitor engineer at the time switched to a DiGiCo console after coming to realise the flexibility and workflow advantages, which was an improvement in Cunningham’s eyes, and laid out the first step in what would become a complete overhaul of their audio systems.

“I really began to push for Dave [Roden, FOH engineer] to get onboard with the possibility of a fully integrated audio console system that would allow me to employ a fully redundant Optocore based I/O audio system,” Cunningham reveals. “That would allow us to do so much more, so much faster, and safer. He was receptive to the advice, and we settled on a DiGiCo SD5 for him. An immediate transformation occurred, which saw us halve the size of our stage package footprint, and add so much flexibility to the rig.”

The team started out with a pair of 56-channel SD racks running on an Optocore loop which passed through both FOH and monitors. They used gain share scenario for all channels, as well as some specifically assigned inputs which allowed FOH its own head amp gain control within the same rack unit. Various output cards were also assigned to the consoles, doing away with the need for some of their FOH return lines.

“It may seem like a simple thing, but one of the best things to come out of this was the fact that we could utilise the ‘CON SEND/RECEIVE’ function, which allows signal paths to be patched from any console on the Optocore loop to another. We no longer had any analogue patch lines up to the consoles from the racks, but simply a pair of fibres into each console that carried all the signal paths we required. Gone were the days of dodgy festival analogue return lines!”

As rehearsals continued, the plans for the tour matured, and more elements needed to be added to the system to achieve what was being asked of them: Optocore made this very straightforward.

“Firstly, Dave Roden sighted the need for several outboard FX and processing units in his FOH rig. This would have used to have meant a rack of outboard and a set of XLR tails, or bulky analogue multi-pin cable running to the local inputs from his FX rack; but instead, I built him an FX rack with a super compact SD Mini Rack hidden in the rear, which sat on the Optocore loop, and simply appeared on both consoles,” Cunningham explains. “He was then able to connect his FX rack wherever we were in the world with just one additional lightweight optical link, as opposed to a lengthy patching process of many lines, using up the precious local I/O of the console. We travelled this FX rack to five continents, and it was just like being at home each time. No fuss at all.

“Secondly, when planning the arena/festival headline tour, the band decided on a B stage scenario, which saw them constantly switching between a second stage and the main stage throughout the concert; as well as more than 32 additional inputs on the second stage, there were also monitoring outputs and shout busses required for the musicians and techs in that area. I simply slotted a third SD Rack into the Optocore loop, which was housed under the stage, over 30 metres away from the existing stage racks. Once again, this appeared on both consoles, and allowed us to add minimal infrastructure and cost to our setup, while appearing familiar and simple to the engineers.”

It’s no surprise then, that after so much effort from all parties within the Sterephonics audio team, Cunningham feels they are now in a place where infrastructure challenges are a thing of the past: “Optocore has allowed us a creative freedom, especially when considering the technical challenges behind an artist request,” he concludes. “We wrapped up the campaign with a headline Saturday night slot at RIZE festival, including our full B stage setup; it was a flawless show, as per usual, since Stereophonics became an Optocore-based act.”