Modern metal/electronic band CueStack recently released their third effort in a series of debut music videos that features a sophisticated industrial stage design packed with 170 high tech lighting units from Elation Professional. “Beyond the Veil” shows a dystopian vision of the new digital age and uses the intricate set-up as both performance lighting and impactful visual accompaniment. 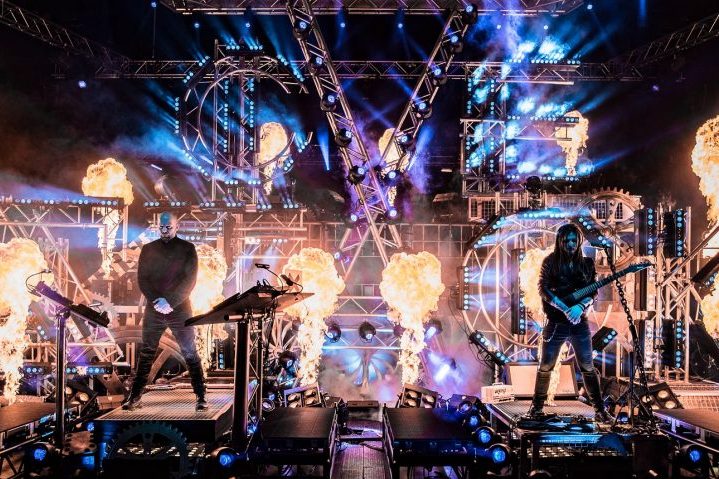 “Big production is essential to this project and the lighting design plays an essential role,” states Martin Kames, owner of Austrian-based production company MartinKames.com and vocalist/synth player in the two-man project. “Beyond the Veil deals with modern day issues but it’s also a huge lighting-themed visual experience.” With CueStack, Kames and vocalist/guitarist Bernth Brodträger have created a mesmerizing symbiosis of modern metal and electronic music. Kames works double duty on the video shoots, operating behind the camera on lighting and set design then moving in front of the camera as vocalist and synth player. Because Kames stocks an abundance of lighting, video and trussing equipment in his MartinKames.com warehouse in Vienna, he was able to overcome any limitations for the music video designs and create a look that fulfilled his vision for the project.

The debut music videos with the full lighting rig on display can be seen at on the CueStack website. CueStack plans to release two more music videos this year to conclude their first cycle of releases.