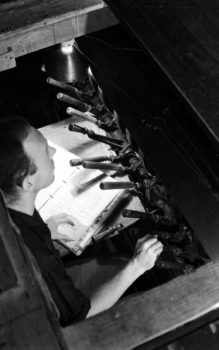 Programming moving lights in the “old days” was not an overly complicated task, but it certainly wasn’t easy. Today’s modern consoles have made the process much easier, despite today’s moving stage lights becoming more complicated and full of features that a stationary fixture couldn’t dream of.

A successful programmer needs patience and persistence bundled together. They also need to be a good translator – converting other people’s requests, needs and visions into creative and engaging lighting.

Moving lights and a good controller can easily be some of your best tools in creating successful stage lighting for events. So knowing the tips and techniques that seasoned programmers employ is extremely useful.

Always tilt before pan. This is particularly true with moving heads. If you move the pan first, you are likely to not see the head spinning in its downwards position. 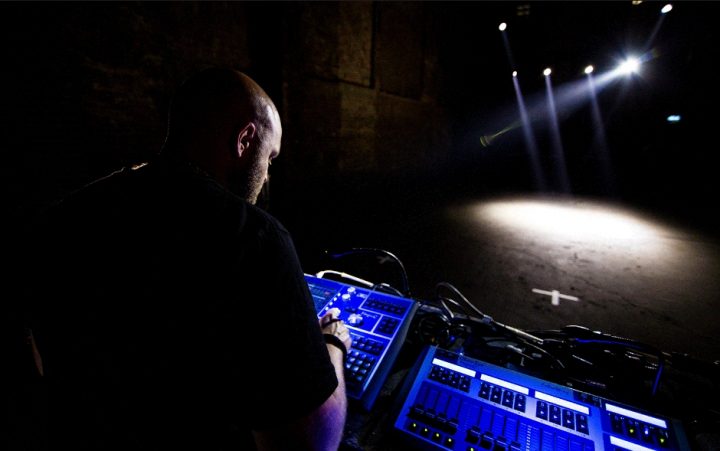 You will find that it’s super easy tips like the one above that save you the most headaches or, in the case of moving pan first, you save yourself a panic wondering why your moving light isn’t moving.

Most consoles have a selection bank of some sort, typically called “groups” or a similar term. This is an area on the desk that can serve you well and begs for attention and care. Spend time creating and arranging your groups so that you have quick, easy access to your fixtures.

Back in the mid 90s, I had a technique for arranging groups on my Wholehog II which today is regularly found as a popular option on almost all moving light consoles. This feature is often generically called a rig schematic. With this powerful option you can make arrangements of fixtures and combinations that resemble your lighting rig and allow for fast, visual selections. 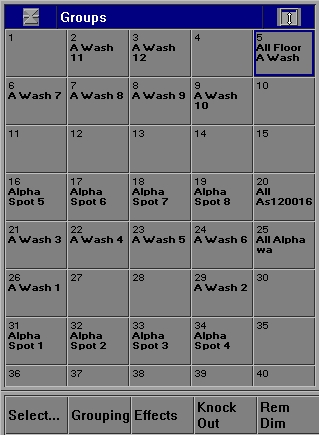 Many years ago at LDI, my good friend Glynn O’ Donahue (Mike Grosz and Glynn sold me my first Hog II – #06) overheard me talking about how I lay out my groups in a rig schematic format. He said that I had to see the new console he was now supporting, called Jands Vista. He showed me the 2d icon layout and it was perfect for quick selection and even visualising what my lights were doing. 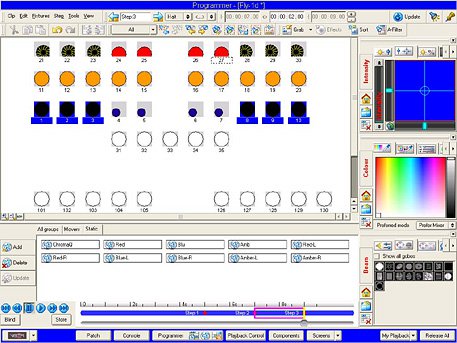 You’ll also want to create groups of individual fixtures that you will use often. Depending on the needs of the event, you may want to create items like odd and even groups. These will allow you quick access to offset fixtures for creating chases, fly-outs and other cue items that benefit from being offset or staggered. The idea is to have as many quick building blocks as possible so there is less delay in accomplishing the various tasks of programming.

Pallets (sometimes called presets) are another important programming option. These quick recall buttons are again made to speed up programming by allowing us to store various lighting parameters and settings in cues for playback. One way to approach these is if you find yourself recreating a stage lighting look with your lights. In this situation, you will likely want to make a preset (pallet) stored with these values. With your preset made you can now quickly recall the settings to record in cues, cue lists, or other pallets. In preparation for a programming session you can determine what will be needed for your event and create your various pallets ahead of time rather than doing it whilst you program. You can even store things like timings in pallets.

You will probably also want to build US and DS focus presets. If it’s a band, you can make presets for positions on stage like a singer, drums and keys. You also would build things like solo positions for your band to use during their show. As mentioned you can often add timing to your presets so they can be recalled for live hands on programming, which some call “Busking a show”. 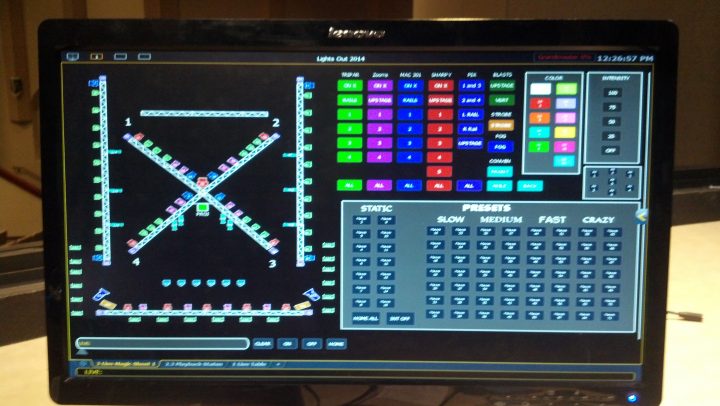 Example of an Ion magic sheet setup for busking

My good buddy Nook Schoenfeld put together the “Ultimate Punt Page”, which he even made in to a DVD. In it, he takes you through many of the various programming options and techniques you need when creating a live punt event. If you just Goggle the name of his page you will find both the DVD and the original article he wrote on the subject.

Knowing how to busk or perform complex live changes using your programmer is great, but much of the art or finesse will be found in your pre-made lighting looks and transitions. Quite likely, your desk will have a feature that is called Live Timing. This option is used for creating lighting looks for playback live from the programmer and works perfectly with your presets. It can also be an extremely useful option when busking a show.

Example of a rig schematic on a Chamsys

During more subdued events, where rock and roll style (flash and trash) cues are not appropriate, having the ability to make moving lights move without seeing the movement or beam alterations is what sets a top programmer apart from the rest of the pack. The most obvious way to accomplish these controlled transitions is by using timing.

The feature that I loved most on the Jands Vista was that it came with a timeline. This is an amazing option that makes timing visual and a very easy process for creating intricate transitions in and between cues. 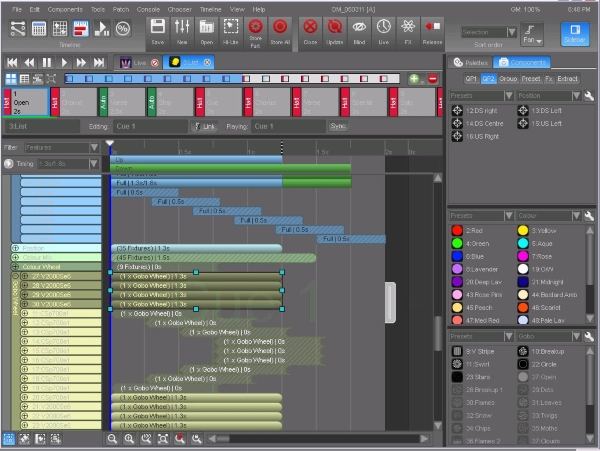 Using timing options you can choose whether the moving light parameters you are recording will change all together or perhaps offset. This can be seen un the above example, which shows a timeline with various parameters included. If you look close you will see how the timeline has a staggered layout of the position parameter (the blue boxes offset from left to right). In this example, the lights will move but they will do it one fixture at a time. You can also see that the gobos are set to change starting with the outside fixtures then triggering two fixtures at a time moving towards the centre. 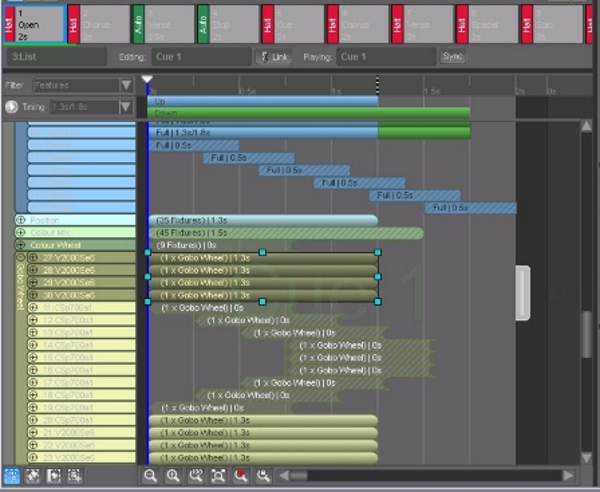 Close up of the Jands Vista timeline.

On other desks this staggering process is often called fanning. In this case though, you will typically enter your timing values using a keypad. You can record a cue with the position parameters staggered in this same way by offsetting delay value for the range of your fixtures.

Timing options on a Hog 4

There are many useful options for cues and cue-lists, such as release time which designates whether a playback will release its cue with a fade time. On some consoles, you can choose an option that will release intensity first and delay all parameters in a cue. This way you don’t see things like gobos moving back to a home (default) position. This option is called Move in Black and we will discuss this later in this article.

This is a useful option because it gives you manual playback of all programmed parameters and timing. This can be a very useful option for manually controlled fades of things like position, effects and much more. 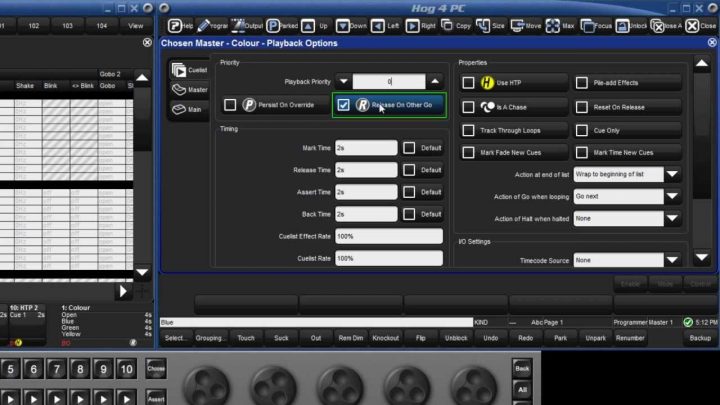 Playback Options window on a Hog 4

Many programmers often overlook this feature, however it provides the ability to adjust how your fades unfold in your cues. I knew one programmer who would typically change path on many of his movement cues. So rather than the normal linear fade for pan and tilt he might choose for pan to snap at the beginning and tilt would snap at the end. This type of action would usually take several cues to create, however this made it so that his cues played back far differently than most movement cues you would see in other shows. 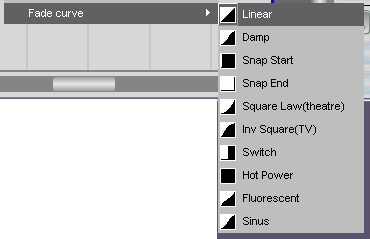 Move in Black (also called Mark Cues) is another playback option that will “mark” all selected lights that have functions programmed in a following cue. In other words, the mark feature grabs parameter information from the subsequent cue and presets those parameters in the previous cue but with the intensity at zero. This is an important requirement when using this option. In order to mark lights for an upcoming cue, they need to be programmed at zero intensity in the presently marked cue. This is also a feature that tracks the mark so that if you make changes in your live cue, the marked cue will automatically be updated with those changes.

Mark options for a Hog 3

This option on consoles provides some of your most powerful and quick programming options but it is also a complete subject all on its own. I will make effects the main focus of the next article along with more useful programming tips. 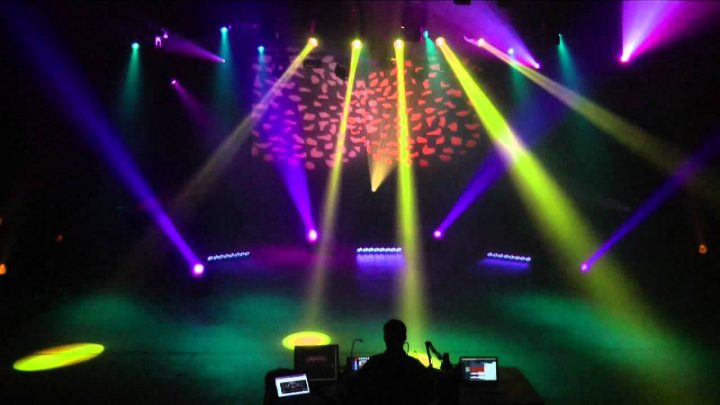 These are just some of the main tricks you will want to explore the next time you find yourself in front of your favourite lighting desk. You will also likely find that as you explore these more powerful options, it will lead to other useful tips of your own that not only speed up your programming but also provide you with the elegance and finesse that the most experienced and talented programmers exhibit on a daily basis.

Feel free to share your favourite tips but please, no Moth memes. 😉