Adlib was the audio supplier for the Giant Spectacular show staged in Liverpool, produced by the street and outdoor theatre company Royal de Luxe.

The extravaganza attracted an estimated 1.3m people to the city centre over the weekend of 4-7 October to see this tale of epic proportions, and the fate of the much-loved oversized marionette puppets unfold. Characters comprised The Explorer, the Little Boy Giant, his dog Xolo, and a surprise appearance by the Little Girl, who re-entered the story on the Sunday for the finale. 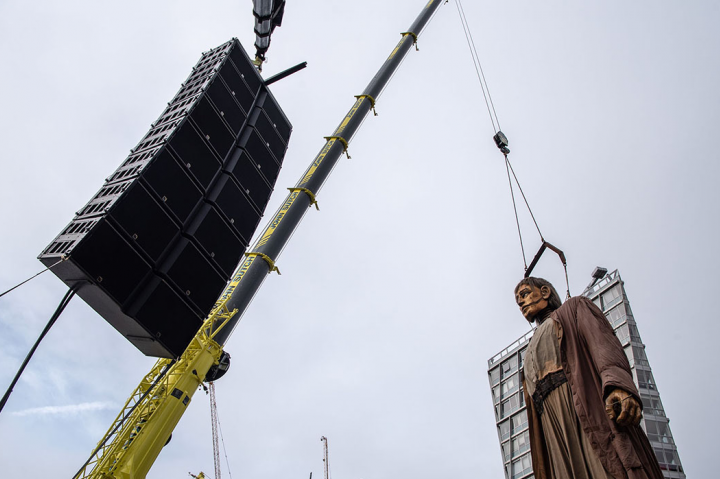 It was the third Liverpool Giant Spectacular, and having delivered the previous events in 2012 and 2014 so successfully, Adlib was commissioned by production manager Stu Stalker of Event Design Co (EDC) and Royal De Luxe’s production manager Jeff Havart to provide audio.

Adlib provided on-board sound systems mounted to the supporting structures for each of the Giants and a custom Music Truck which featured a live band. The company also provided several reinforcement PA systems, which travelled to the different gathering points along the 20-mile route.

The Giants’ route started at the St George’s Hall Plateau for the Little Boy Giant and over in Fort Perch Rock in the Wirral for The Explorer, ending at Canning Dock.
Each Giant had its own on-board monitor system which was used to communicate “orders” to the many people (‘Lilliputians’) required to operate and drive the massive pullies and rigging systems that enabled the articulated joints and wheel bases to move the marionettes. 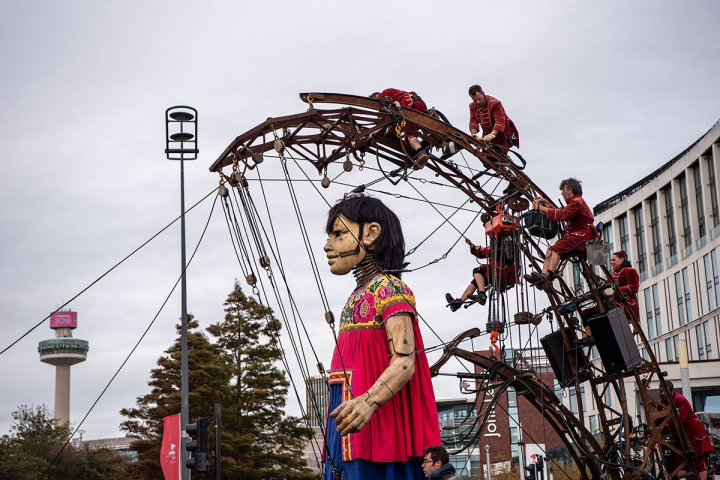 Stéphane stipulates L-Acoustics systems exclusively for these shows, primarily for the wide range and flexibility of its products, the efficiency of the enclosures, plus the fact both companies are French makes L-Acoustics a first choice here. On a more general level, Stéphane has a historic relationship with the brand’s touring support team and of its global availability via the L-Acoustics rental network, which aids continuity between shows around the world.

Each of the Giant’s PA’s were positioned and secured in place with several bespoke brackets and rigging designed to maximise the impact of the loudspeaker enclosures whilst having the least effect on the aesthetics and appearance of the Giants themselves.

Much of the event comprised the Giants parading along the streets of Liverpool’s city centre, and throughout the journey, they were always accompanied by The Music Truck – a flatbed containing a full live band, complete with a 24 element L-Acoustics Kara system with four L-Acoustics X12s for side fills and four ARCS-II for rear coverage, together with 10 x SB18 subs. The mixing console on the truck was a DiGiCo SD10.

Adlib director Phil Stoker comments: “Having worked on the two previous Royal de Luxe Giant Spectaculars in Liverpool, this was a very special moment, and we are all honoured to have been part of the team delivering the action and to see another fantastic event touch and engage so many people in our home city.”