Robe presented part two of its “Lost Worlds” exhibition live show trilogy concept at LDI (Live Design International) in Las Vegas, with another jaw-dropping booth design and an edgy, hi energy 8-minute live dance extravaganza designed to illustrate its latest technologies in the context for which they have been developed. This included the just launched T1 Profile LED moving light. 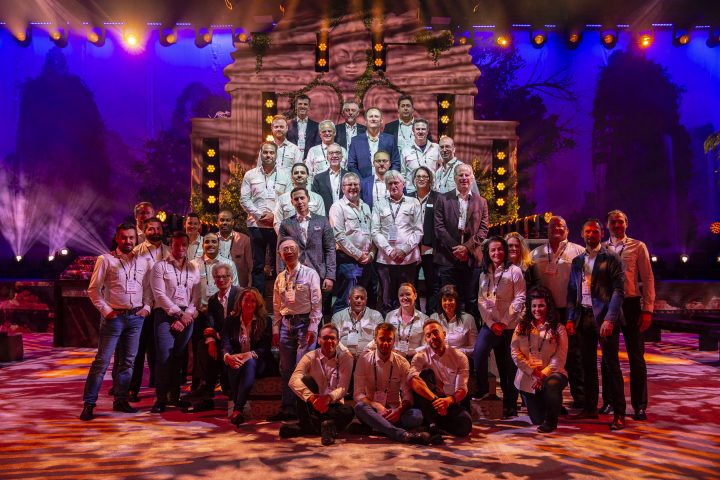 Over 200 new and current moving lights and LED fixtures – including the SuperSpikie and the MegaPointe, Spiider and Tarrantula LED wash beams, BMFLs and the RoboSpot remote follow spotting system running with MDC (multi device control) – were central to the show. Robe’s new iParFect – the first in a series of upcoming IP rated luminaires – was utilized in two rain curtains that were integral to the fully immersive and highly detailed show environment.

The show narrative followed the intrepid Explorer character, having journeyed from London fighting her way through the jungle, encountering hostile Ninjas and other obstacles, arriving at a clearing in the dense forest and discovering a lost temple. The storyboard was originated by Robe’s own creative team led by Nathan Wan and Andy Webb.

Robe has raised the bar in entertainment technology expo stand design and presentation over the last two years, showcasing its products in ‘real life’ scenarios, as well as providing a fun and entertaining story in which all can engage.

“The bottom line is always that we are showing off the lights and effects in the best possible way, as well as building our overall brand identity and commitment to the world of live entertainment” stated Nathan.

They needed this LDI show to be physically starker that the one at PLASA, where the trilogy was launched, and on top of that, the drama needed to reflect the different culture, dynamics and demographics of the audience.

Being in Las Vegas – famous for razzamatazz alongside prolific and epic spectacular shows, the pressure was also ON to produce something slick and appropriate. 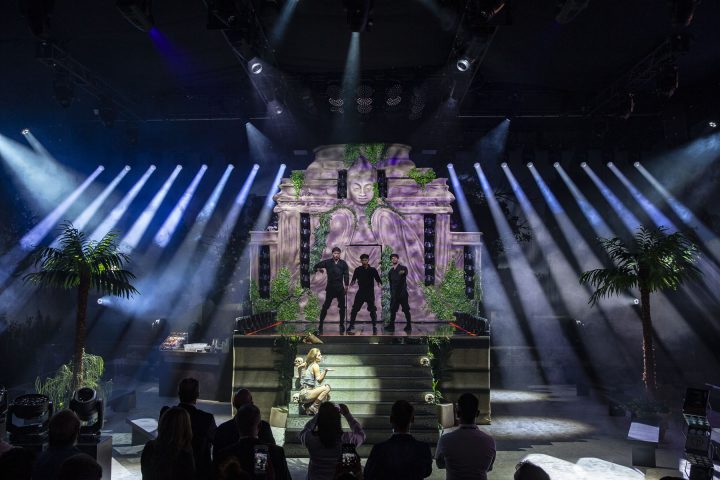 The soundtrack came first. Nathan and Andy are both very familiar with the products being used and features needing to be highlighted, so they then programmed the lightshow to the soundtrack using a visualizer.

Once on site at the Las Vegas Convention Centre, the booth, set and lighting installation build was overseen by Nathan and stand production manager Josh Williams, Robe’s international exhibition manager Tomas Kohout and the “fantastic” technical and service team from Robe North America “without which we could never have achieved this ambitious project in such short timeframe” confirmed Nathan.

The new T1 Profile was the main feature light, so this was used for all the key lighting illustrating how its MSL™ (Multi-Spectral Light) LED lightsource combines brightness with smooth CMY color control and dimming to meet the challenges and demands of three very diverse disciplines – theatre, television and touring – all in one comprehensive fixture.

SuperSpikies were rigged in prime positions either side of the temple for powerful back lighting, and there was a grid of Tarrantulas above center stage, with MegaPointes dotted all over the rig including around the two water curtains, used for general lighting, texturing and effects.

Vertical lines of LEDBeam150s were embedded in the set for ‘blinder’ moments and other aerial effects, with Spiider LED wash beams and CycBars providing some of the interior scenic illumination. 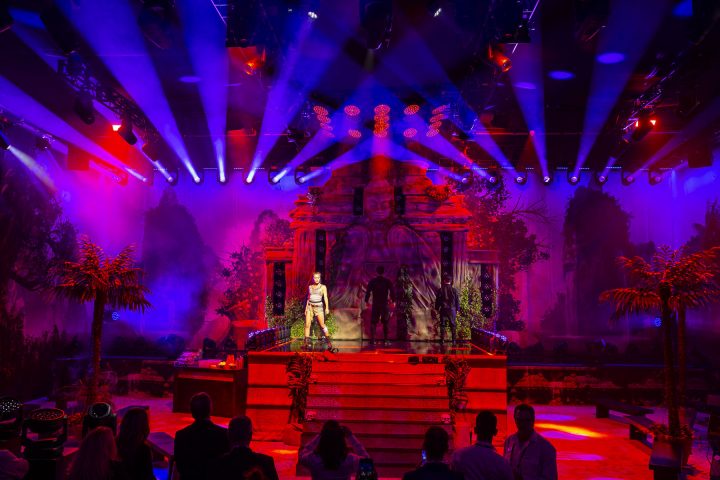 CycBar UVs working in conjunction with Divine 60 UVs highlighted the detail and intricacies of the external printed drapes around the main booth, and the separate but conjoined Anolis area which was dedicated to previewing new products from Robel’s architectural LED brand.

The Anolis external drapes were lit with a combination of Divine 160s, Spiiders and more BMFLs, showing their capabilities in an architectural context.

At the back of the booth were two dark demo areas which were constantly busy throughout the three-day expo, and off to the side to the front were two rooms dedicated to private meetings.

The stunning booth design and the show drew people to the stand from the moment the show opened on the Friday, and they kept coming for the next two days.

Robe CEO Josef Valchar commented, “This was without doubt our highest-impact LDI booth yet, and I would also honestly say the busiest and best LDI expo for us in terms of visitors – both quantity and quality! LDI has a great reputation for attracting ‘serious’ people, and this year we were delighted to see so many top-level designers and creatives as well as a lot of industry professionals who are starting or early-on in their careers and hungry for innovation! It was really most impressive.”

Robe North America COE Bob Schacherl stated, “Planning for a booth like this starts a long time in advance and involves a lot of time, effort and collaboration between Robe North America and the international team … and the results just keep getting more spectacular. We’ve met a lot of new contacts this year from a diversity of sectors which I think reflects the success of our long-term brand strategies, commitment to inventive products and the general postitivity associated with Robe in the North American market”.