As Prolight + Sound Frankfurt continues to thrive, it would be all too easy to state that there’s nothing that the show could learn from its Eastern counterpart – Prolight + Sound Shanghai. However, as we discovered from this year’s show, there’s certainly a great number of themes and attitudes that could act as inspiration for the European show. At first glance the statistics for the show, held again at the Shanghai New International Expo Centre (SNIEC), are clear. Although the same number of brands were represented at this year’s show when compared to the 2017 edition, the stands covered a larger footprint of 48,000 square-metres across the the four halls. This is a statistic that was visually reflected by the appearance and layout of the booths, many of which were far more sophisticated and well-designed than those seen at previous editions. The Chinese industry is one that is often considered not to place anywhere near as much of an importance on marketing and brand recognition as the western markets, so it was certainly refreshing to see an increased number of companies investing in their outward appearance and corporate image. There was also an increased level of demo areas present at the show in comparison to previous editions – for example a collaborative effort between Funktion-One and their distributor for China, Hong Kong & Macao – Phoenix Audio. This type of experience gave visitors additional opportunities to experience high-quality products that might otherwise be overlooked if judged by the Chinese market on brand image alone. 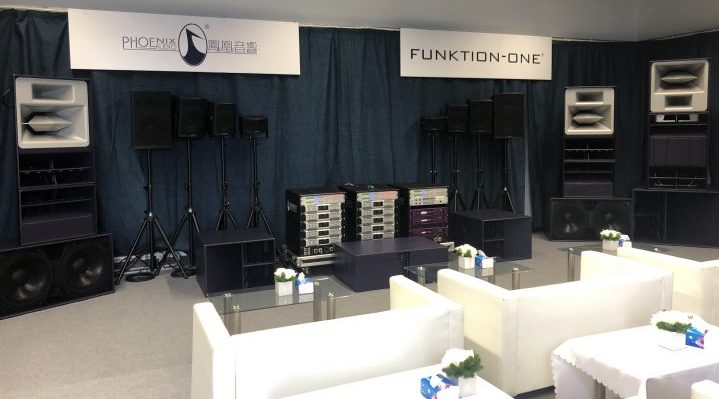 The target audience of exhibitors at the show is one that is developing in reaction to the changes occurring within Chinese society. Gone are the days of a divided social system, one where a clear division between the working class and the wealthy existed. Instead, a booming middle class provides ever increasing levels of disposable income, creating with it a desire for higher-ticket items and brands. This is something that the audio market in particular can capitalise upon, with the desire for higher quality music-playback and audio consumption growing year on year. It’s possibly too early to say whether this same principle will migrate across to the Pro Audio sector. Here, a division can still be seen. In its most basic form, one only needs to glance at the outside line-array demo area of the show, which sees two clearly separated areas present – “Line Arrays of China” and “Line Arrays of The World”. It could be argued that visitors are being invited, perhaps actively encouraged, to compare the difference between the quality of the products produced by the truly international players of the market and those of China’s domestic scene. However, I almost approach airing this idea with caution, as part of me is suspicious that the thoughts running through the minds of visitors to the show is one of complacency, with the demo area merely demonstrating how a subjectively “acceptable” level of quality can be achieved by a much cheaper domestic brand. It’s interesting, though, to see that more and more internationally recognised artists and bands are touring China – bringing with them high-end audio brands as part of their production. This is something that could potentially drive a higher level of demand for these systems, as Chinese audiences are exposed to systems capable of producing higher levels of sonic quality. Potentially, these events give opportunities for exposure that might otherwise not exist in China, outside of events such as the Prolight + Sound show. We took the opportunity to speak with a number of exhibitors across the show, to see what their thoughts and feelings towards the current format are. Superlux’s Tony Lu told us:“We have been exhibiting here for the past 10 years or so. This year has been a little quieter than last year, however numbers based on years before that have been good. What is not important here is purely an increase in numbers year on year, but a consistent quality of conversations and business interactions taking place. I would say that probably half of the people coming to visit us are from the Chinese market, the other half from international markets. In terms of the nature of the conversations that we are having, those from the domestic market seem to mainly be customers from the rental companies. On the other hand, the international conversations that we are having tend to be primarily with distributors who are interested in distributing our products in their respective territories. These customers mainly tend to be interested in our smaller product ranges, such as our headphones and microphones. I think this is mainly because they are more affordable for these companies to purchase and ship in bulk, and therefore the resellers are able to achieve a higher profit margin on these. Generally speaking, we tend to find that the Guangzhou edition of the show (the 2018 edition of which was held in May, read our report here) is busier and sees more halls filled with products as far as Prolight + Sound is concerned. However, there is certainly an important focus on the international market which is present here at the Shanghai edition, something that is not quite there with the Guangzhou show. Because of this, we will certainly be returning next year, maintaining our pitch size of 168m2, one of the largest at the show.” Wang Junxiong, General Manager for IAG & Sanecore (distributors for Axiom, Wharfedale Pro and SGM, amongst other western brands) echoed this focus on international appeal at the show. “It has been on first appearance here at the Shanghai edition, but we have been present at the Guangzhou show for two years. Guangzhou is more important for us in terms of the domestic market, with us mainly dealing with distributors at that show. Although we only distribute SGM and Axiom here in China, we are actually now the owners of Wharfedale Pro as IAG Group LTD, and have been producing the brand here in China for the past 20 years. We already have a strong distribution network here in Shanghai, however the show has provided us the perfect platform to meet with our distributors and share thoughts on both the past and future of the market.” 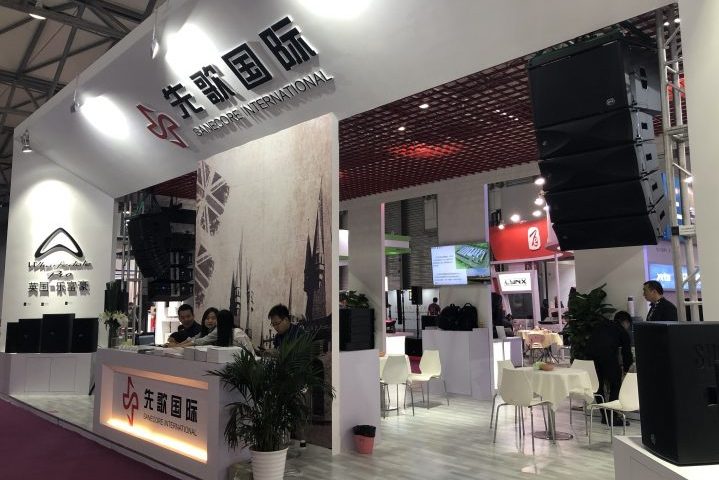 Rio, Promotion Director for Professional Products at ArtSound, (distributors for Sennheiser in China), believed the show to be more important and relevant to the domestic market, however outlined the show’s increasing importance to international trade. “Most of the companies we are speaking with are production companies. These are mainly Chinese companies, although we have had a few unexpected discussions with international clients. For us, we have seen more visitors to the show than we experience at the Guangzhou edition. I think that as a city, Shanghai is developing and really growing its attractiveness for international trade and business. I believe that this is reflected within the pro audio market, with Shanghai being seen as a more international meeting point than Guangzhou. We will definitely return next year with a bigger stand, hopefully located closer to the front of the hall. 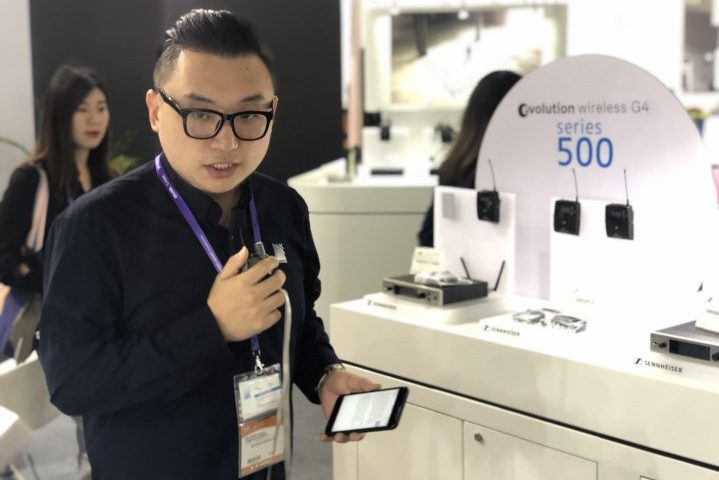 Finally, representatives from Haoyun Audio (distributors for Yamaha Pro Audio & NEXO in China) believed that the Chinese market was shrinking in terms of domestic companies, however that international appeal is growing. “We have had a steady stream of visitors over the 4 days of the show. I believe that the footfall has been far busier, at least for our booth, than that of the Guangzhou edition. Our Chinese clients are now looking to invest more heavily in international brands, in particular the rental companies, as more and more visiting acts from overseas are demanding that these systems are used for their events. We have exhibited at this show every year for the past 10 years, and we have definitely noticed an increase on the numbers of international brands that are represented at the show in comparison to last year.” 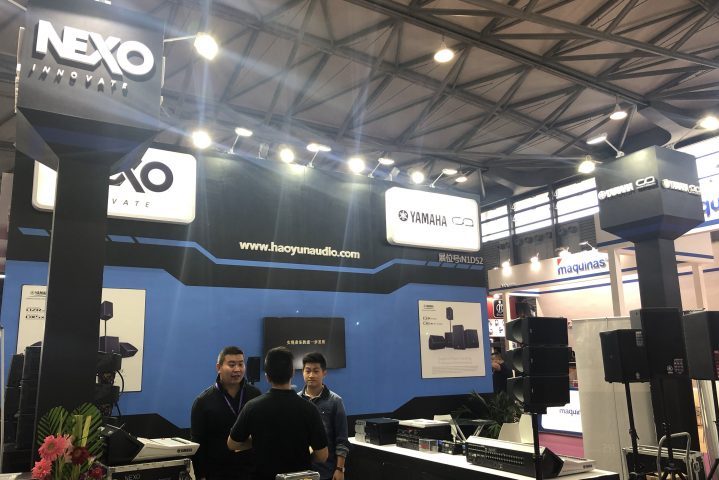 Lighting, it could be argued, is a completely different ball game. It seems that the focus here remains to be on affordability rather than quality. This year’s show saw a lighting hall almost divided into two – one half displaying smaller, (even) cheaper “disco” type lights, and another displaying rows and rows of single “Sharpy” style moving heads that look suspiciously like one another, lacking in originality with regards to functionality just as much as in appearance. It’s clear here that quantity rather than quality seems to be the attitude taken by the Chinese markets, something that is not moving in the same direction as that of the audio industry. There has been a crackdown on direct copies and clones of patented and registered technologies by industry leaders, however this is seemingly far from stopping imitation completely. 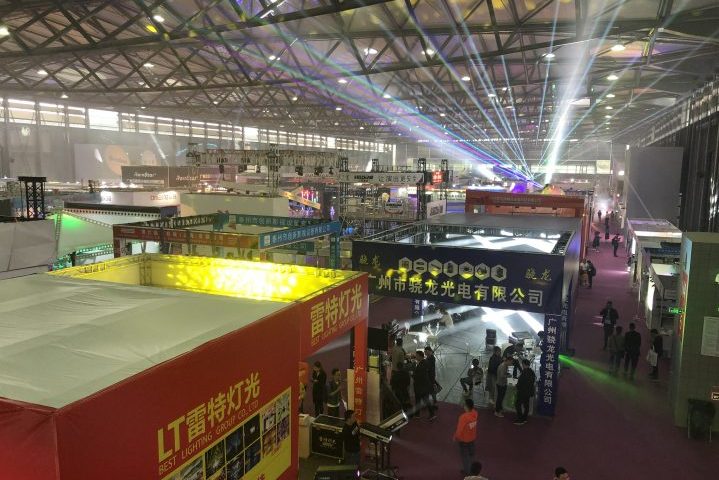 One aspect of the lighting sector that does seem to be developing in terms of quality and originality is that of laser projectors. As demonstrated in the image above, the power that these fixtures are now able to produce from a relatively small and lightweight box is surprising. From speaking with these companies, their claims on speed and precision match those of their western counterparts, however this is something that would need side-by-side testing in order to conclude upon. Overall, it’s very easy to focus on the copies and mass-produced factory products and lose sight of the developments that are happening elsewhere, especially if you pay due attention to the insights gained from speaking to those at the show who are ready and willing to increase their international business links. What’s also inspiring from the Shanghai edition of the show is the sense of community and togetherness that propagates through both the Prolight + Sound and Music China Halls. Individuals meet to make music, record and share ideas in an often informal and more casual manner than we see at the Frankfurt edition – something that draws extra crowds and customers to the show and in turn drives levels of engagement. This is a simple yet effective concept that the show’s western counterparts, particularly MusikMesse, could really capitalise upon.

Numbers aside, the Chinese market is becoming increasingly attracted to the quality and reliability of international brands and products, driven partly by the demand from international clients seeking services from domestic rental and production companies. It is yet to be seen whether a (it could be argued) shrinking domestic market will react to this development and aim to offer products that are not just able to simply compete on an affordability level, but also compete on a level playing field when factors such as sonic quality, output levels, feature-sets and usability are considered.