Few singers have risen to more prominence with greater energy and velocity than Puerto Rican urban Latin trap and reggaeton star Bad Bunny, who hit the scene in 2015 and has been making a big impact and serious amounts of noise ever since!

He’s currently engaged in his largest tour to date, ‘New Religion’, which played Europe in July and continued in US arenas throughout the fall. Lighting designer Krizia Velez came onboard in August 2017, initially joining the Bad Bunny crew for a series of one offs. Then this extensive tour was announced, and she was one of the production team.

Krizia put Robe moving lights at the center of the lighting rider. 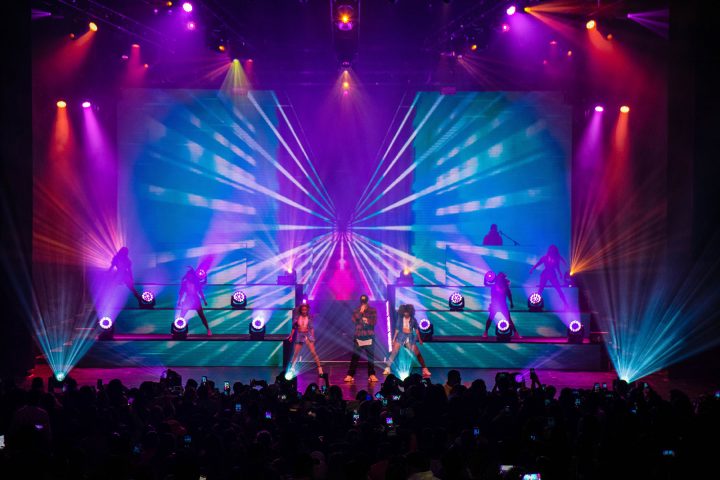 They commenced the tour with 86 fixtures on their rig, including 22 x Robe Pointes and 18 x LEDWash 800s amongst others …. However as the Bad Bunny buzz exploded, the spike in interest and excitement resulted in shows being moved to larger venues … so they needed more lights!

Soon there was a new design, complete with 28 x Robe BMFL WashBeams, 46 x MegaPointes / Pointes depending on availability, 22 x BMFL Spotbs plus other lights!

Robe is always Krizia’s first and second choice of fixture when compiling a rider and that’s through her experience of the brand’s reliability and because she perceives Robe as a market leader that meets the “requirements and standards of the artist.”

She also likes the innovation that she feels is characteristic of Robe fixtures.

On the deck they have six risers, three on stage left and three on stage right, and the floor kit includes six Pointes / MegaPointes, 16 x Robe Spiiders and six LED strobes – all arranged on vertical Tyler pre-rigged truss towers.

This is for speed and easy deployment as for many of the shows, they have only a 4-hour get in / out window. 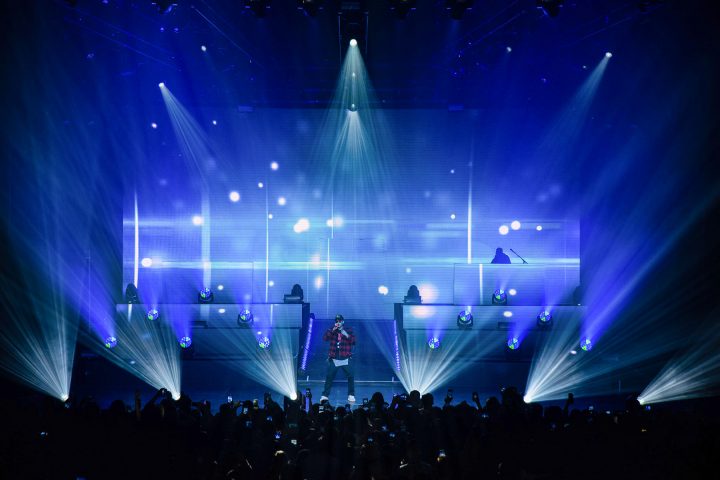 She really likes the quality of the Robe colors, both in the color-wheeled fixtures like Pointe and the CMY mixing systems of the BMFLs and MegaPointes, and of course the beautifully homogenized LED engine of the Spiiders.

It is the “power and precision” of the BMFL beams that ensure the same quality of light whether they are playing a small, medium or large venue or an outdoor show. She underlines that with Robe on the rig, the gobos remain crisp and clear and equally potent even in dark colors.

The Spiiders she loves for the functionality of whatever mode you are working in, and the incredible power of the LED light engine. “If you didn’t know better, you would not guess it was an LED by looking at the output!” She also appreciates the zoom and being able to go from a nice wide fat-beam wash to a tight column. The Effects Macros are “very useful when creating an intimate or private moment within the musical theme onstage.” Then there is the diversity of using each Spiider’s LEDnring and each individual pixel, “the options and available color mixes on are really infinite” she enthuses.

Pointes are another Krizia favorite and have been for some time.

She utilizes a lot of Pointe prisms together with the zoom and gobo rotate functions in the Bad Bunny show. The artist is known for his conversational raps and incisive, hard-hitting lyrics, a fusion of which creates the edgy, flashing street style sensation!

Krizia repeats the importance – and security – of having a stable and reliable luminaire particularly for the large shows in front of thousands of people where the pressure really is on.

“Spiider is my favorite LED Wash while the Pointe and MegaPointe are the best beam luminaires on the market right now!” she declares, adding that her control console of choice is grandMA.

She comments that technology changes fast and she feels that Robe keeps ahead of the game and listens to the preferences and requirements of LDs as well as recognizing and appreciating the work that they (LDs) are doing in promoting the brand. 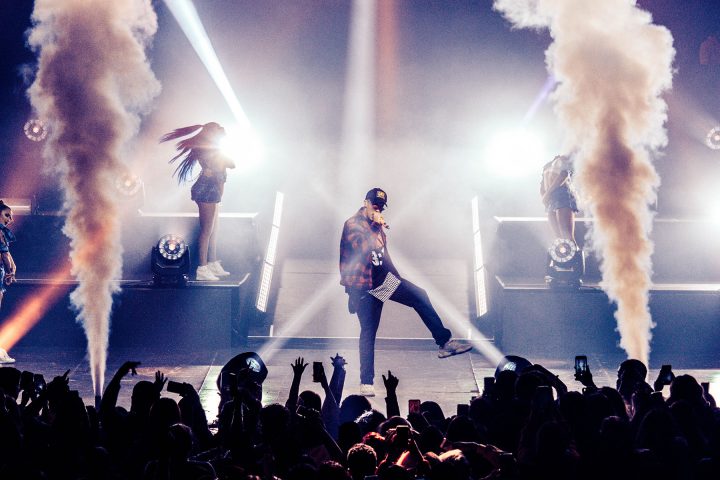 “Robe is working hard every day to get their brand out there and across to people, it supports those using the products really well and that’s why Robe is so visible in every part of the world!”

She admits that a big challenge of working with regionally supplied production equipment is getting the exact rig that you want and need to fulfil the design and creative plan for the band. Also, in designing something practical to take this into account which is still workable when substitutions must be made, “that still looks great for the all audiences and the artist wherever he happens to be playing.”

Krizia works closely on the tour with VJ Armando Pagan to ensure that video and lighting have a rhythmic harmony, and she will often match colors and textures with video cues and content onscreen, making sure that the lighting looks clean and organized working in conjunction with the video.

”It’s really important that the two medias can work together and underline the narrative of the song” she states.

For the first leg of the tour in the US the lighting was supplied by LPS Production from Miami, and for the most recent, three different companies were involved – Audio Spectrum, Paradigm and LDGS Lighting – with Audio Spectrum providing the Robe fixtures.

For the first UK and European dates, the Robe versions of the rig were supplied by Audio Visuales Canarias, part of the AVC Group and based in Gran Canaria.