Presenting a sizzling hot and eclectic line-up of great music and generating some amazing vibes, Lollapalooza Berlin 2018 was staged at the Olympiastadion and Maifeld – it’s fourth site in as many years – bringing huge waves of positive and creative energy to Werner March’s stoically powerful architecture.

Leading German rental company TSE – also based in Berlin – supplied lighting and sound for Mainstage 1, complete with a full Robe moving light rig with over 100 fixtures including BMFLs, Spiiders, Pointes and MegaPointes.

For the Weeknd’s Saturday night headlining set, they boosted the Robe count with a specials package of another 174 Robes – almost double the amount of lights in the production rig – part of an eye-catching design by LeRoy Bennett which was overseen and operated by Steven Mills. Heading up the 35-person TSE team on site was Marcel Kuch. The company has supplied lighting and audio to the main stage since Lolla Berlin started in 2015, and Marcel has also been involved for all that time.

He specified Robe for Mainstage 1’s production lighting design for all the reasons that it has become such a popular festival choice, “The reliability, brightness and versatility of the fixtures, plus the fact that international LDs, lighting directors and operators are all happy to work with Robe” he stated.

The generally light weight of Robe products was also a consideration, especially when video screens are also part of the rigging and overall load calculations.

The production rig installed in the StageCo structure was very straightforward, providing three trusses of wash, spot and beam lights as a dynamic and flexible rig for all acts to use including The Weeknd and Sunday night headliners, influential iconic techno innovators Kraftwerk, who closed the 2018 event.

The Spiiders were distributed between the floor and the roof. The 12 x MegaPointes were all on the floor, while the BMFLs and Pointes were deployed in the roof. The working stage space was 18 metres wide by 10 deep with 13 metres of clearance, and with these Robes on the rig, there was more than enough lighting options for the different artists and lively mix of musical genres.

The design was also kept simple also to allow both The Weeknd and Kraftwerk enough space to install their stage set ups. 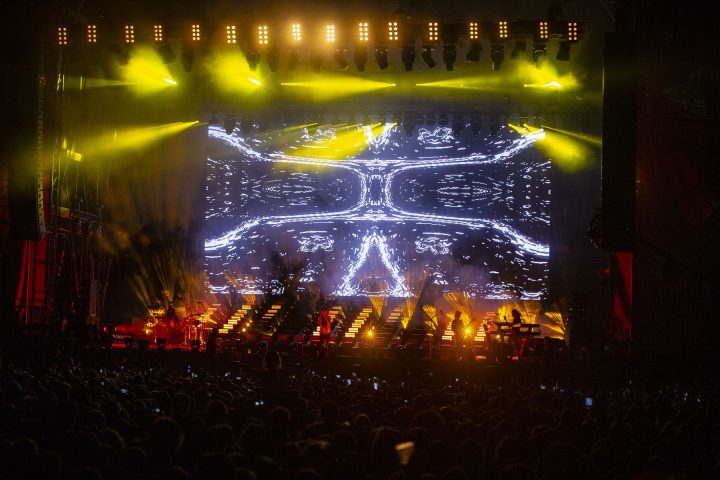 Something for the Weeknd

The Weeknd’s substantial extras package comprised 27 x 6 metre runs of trusses, strapped together in 9 sections – each one comprising three truss sections and measuring 1.8 metres wide. They were built at TSE’s warehouse and installed on rolling carts 1.5 metres high at the back and just off the floor at the front.

These ‘wedges’ were each loaded with alternating rows of Pointes and strobes as well as a fog machine and fans and weighed 1 tonne each! They were transported to site in three trucks.

Upstage of the wedges, a row of 24 x Robe BMFL WashBeams was positioned to blast through the metalwork, and two downstage left and right dollies provided low level front light positions ideal for highlighting the artist, each loaded with six BMFL Blades.

“It’s definitely the biggest specials package we have ever handled at a festival” confirmed Marcel, “and this was the big physical and logistical challenge”.

Meticulous pre-show communications and prep, coupled with a skilled and highly experienced crew on site ensured that everything ran like clockwork, giving Steven the best possible festival show working conditions.

The Weeknd has been playing a series of festivals and high-profile one-offs throughout the summer, with lighting designed by the always inventive LeRoy Bennett. This started at Coachella, where they performed complete with Es Devlin’s spectacular abstract fallen head / hand set pieces, which brought a highly sculptural tone to the aesthetics.

Where it was not practical to travel or install this set, the trussing wedges, while different and more industrial, also subtly physically alter the shape of the stage in an architectural way, together with the effect of the integrated lights which also can radically alter visual perceptions of the space.

Pointes were selected for the wedge structures due to their small size, light weight as well as their speed, genuine multi-functionality and universal availability worldwide.

In this set up they enabled Steven, who programmed the show with Roy’s assistant lighting designer Jason Baeri, to create some fabulously fluid kinetic chases, waves and other effects evoking a stark edginess and perfect backdrop for The Weeknd’s distinctive and diverse R ‘n’ B jam style music … and often provocative lyrics.

Steven uses Robe frequently in his work and finds the products generally “reliable and resilient”. He’s also Beck’s LD and has just specified BMFL WashBeams for their current tour.

The Weeknd’s show director LaMar Taylor co-ordinates the video content – produced by Strangeloop – as part of the overall stage visual design. At Lolla Berlin, their screen was upstage centre, starting at the back / top of the wedge trusses, augmented by an IMAG mix onto two side screens to ensure the large and enthusiastic audience received great views.

To accommodate the Weekend’s lighting rig Marcel ordered some additional power! Usually one 400A three-phase feeds all the onstage lighting including guest packages, but this year they upped it to two 400As plus another 250 Amps of 3-phase. The ‘house’ lighting desks were two grandMA2 full sizes, and looking after everything at FOH was Ludwig Laudan, who also ran lights for any bands not bringing an operator / lighting director.

TSE was founded by Marcel Fery and Peter Weinert 20 years ago and is now a leading rental and full-service technical production company – lighting, audio, video, rigging – working across Germany, throughout most of Europe and internationally. They have built up an excellent reputation and cover all sectors – from rental and staging to concert touring, festivals, live events and corporates, and currently have 70 people working full time at the Berlin HQ.

There are also around 20 people at any time engaged in their comprehensive technical training programme. Marcel is passionate about offering young people serious about the industry a career stepping stone to becoming a professional … and there have been some notable successes.

The company has a large stock of the most recent Robe products, including Pointes, BMFLs, Spiiders and MegaPointes – around 350 fixtures in total.

Their first investments in Robe started a decade ago, and their original 700 series ColorSpot and ColorWashes are still going strong!

Over this time, they have built up a close working-relationship with the manufacturer which is something Marcel feels is fundamental to keeping both the brand and TSE’s investments as a customer moving forward.

“Robe has made many smart moves over time, and one of these is remaining independent and in control over its whole design, development and production process. This and their accessibility and willingness to listen give them a definitive edge” he concludes.