We continue our journey through the technologies present in “Giudizio Universale” (you can find the first part here) by analysing the visual aspects of this particular production. These are characterised by an innovative and spectacular use of video and lights, allowing the public to be transported into different scenarios, from Piazza S. Pietro during the election of the pope, to the Sistine Chapel.

Panasonic, the show’s technical partner, has fielded 30 Full HD high brightness range laser projectors that have covered the interior of the Auditorium, on a vaulted roof made specifically to create a homogeneous surface capable of rendering perfect geometry to projected images. As described in the previous article, the audio was hidden behind the projection surface, whilst lighting sits within two dedicated slits positioned along the sides of the room.

As Michael Pullan, Panasonic’s European PR Manager, explains, the transition from the classic incandescent sources to laser-based sources has allowed a strong development in new markets such as entertainment, improving the reliability of products and reducing maintenance interventions. Above all, for intensive used such as tours or festivals, the problems deriving from the fragility of bulb-based sources has been totally eliminated. Panasonic have been fundamental in pioneering 3D mapping applications, ever since their creations in 2012 at the Berlin Light Festival, followed by the realisation of the largest mapping project in Moscow, one which became a Guinness World Record. 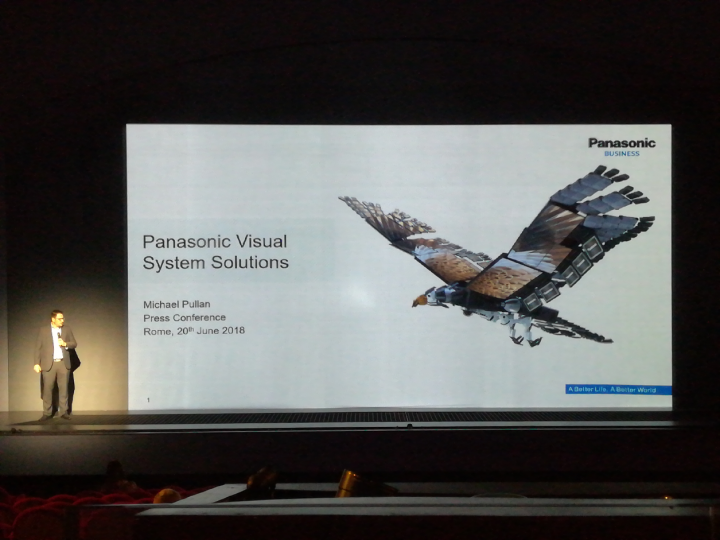 Daniele Parazzoli, CEO of Event Management, who took care of the installation, explained in detail the use of Panasonic technologies within Giudizio Universale. The 30 Solid Shine laser technology projectors deliver 400 lumens per square meter. The setup is divided into 18 PT-RZ31K 31,000 lumens, 10 PT-RZ21K 20,000 lumens (four of which with ultra-short mirror optics ET-D75LE95) and 2 PT- 12,000 lumen RZ12K.

Specifically, the projections on the front vault, divided in three sectors, are produced by 8 PT-RZ31K of 31,000 lumens, whilst the side projections and the vaulted ceiling are covered by PTRZ31K (31,000 lumen) and 6 PT-RZ21K (20,000 lumen) projector sinstalled in the “vomitorium”. Finally, a PT-RZ21K (20,000 lumens) and 2 PT-RZ12K (12,000 lumen) are dedicated to the effects of video mapping of David and on the screen positioned halfway through the staging.

There are many innovations in this installation, starting from the use of the Ultra Short Throw lens compatible with all 3chip DLP projectors, with WUXGA resolution and a projection ratio 0.36:1. There is horizontal lens shift of ± 12% both horizontally and vertically. The use of the laser has allowed (in addition to the drastic reduction of maintenance interventions) for the removal of concerns surrounding over-heating. All this is thanks to the Panasonic projectors and the multiple rigging possibilities that they offer. Moreover, as Parazzoli told us, the projectors were switched on almost uninterruptedly for 10 days throughout setup, without any problems. 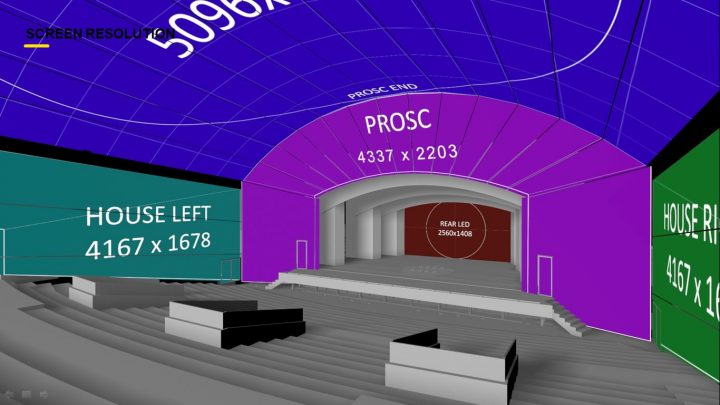 What’s also remarkable is the ability to manage the contrast dynamically, and above all to synchronise it between multiple projectors through a special Auto-Sync function that allows the user to obtain a homogeneous image across multiple projection surfaces.

Moving onto lighting, Giudizio Universale sees Claypaky fielding its technologies alongside those of ADB. These are implemented by two professionals of international standing, Bruno Poet and Rob Halliday. The main result of this integration is the realization of mid-air effects that give a further “boost” to the immersive 3D effect, combined with high quality theatrical lighting provided by the ADB profile and wash-static projectors, and Claypaky K-Eye HCRs, mainly used on the stage. 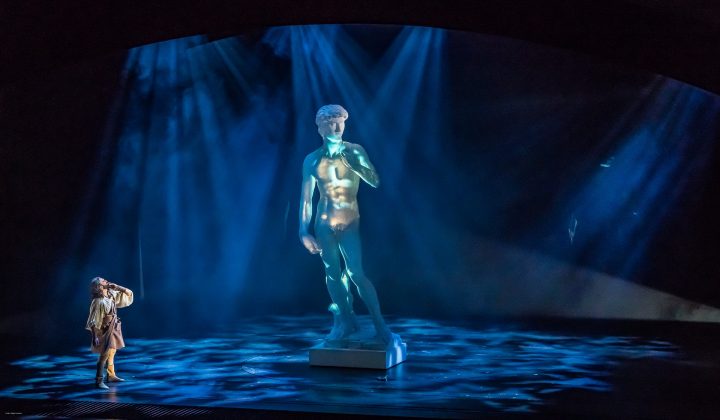 Halliday and Poet have realised a lighting project rich in colour and with high contrasts, so as to evoke the style and the typical mood of Michelangelo’s works. The result is a pleasant contrast of light and shadow, with a dramatic use of the dark and effective use of effects to increase the “wow” factor throughout the show.

For lovers of statistics and numbers – there are 29 Shar Bar and 11 Show Batten used respectively as backlights / top-lights and for the uplight effects from the grid positioned on the proscenium. 18 K-Eye HCR are used on stage, with 47 Axcor Beam 300 positioned along two slits that cross the sides of the room, on the front side of the stage and in the “holes” in the audience where the Panasonic projectors are positioned. 51 Scenius Unico are divided between the stage and the side slits of the hall, whilst 4 Stormy fixtures are used for the simulation of lightning. 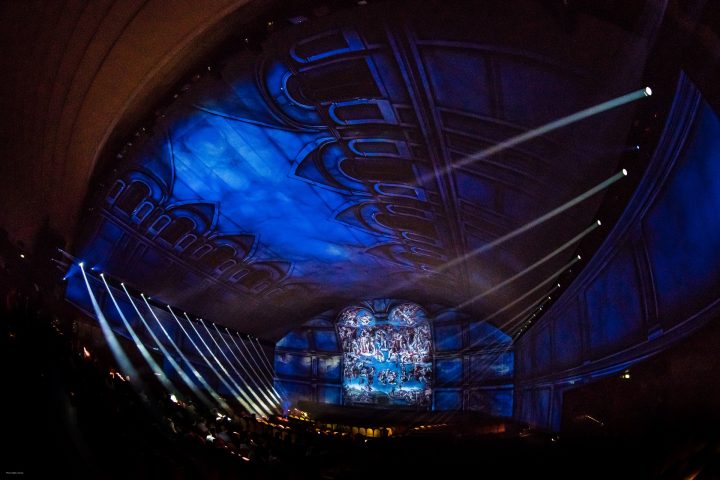 ADB is present with 19 profile Warp, 27 flood Odeon and a 4.5 meter diameter “fireball” made with 50 Svoboda. These are controlled, together with other conventional fixtures, by a Eurodim Twintech dimmer, able to manage 26 channels at 5Kw and 46 at 2.3 Kw.

The Scenius Unico were chosen by the two LDs for their intensity and extreme flexibility, as well as for their particularly light frost and the ability to create narrow and extremely luminous beams. The Axcor 300 Beam, equipped with a soft, precise and therefore highly appreciated fade system, generate effects with narrow and powerful beams, thank to an LED source which also has reduced consumption. Also note-worthy, as explained by Pio Nahum during the presentation, is that all the lighting fixtures on the stage never touch the ground, giving the illusion of seeing the actors float in the air. 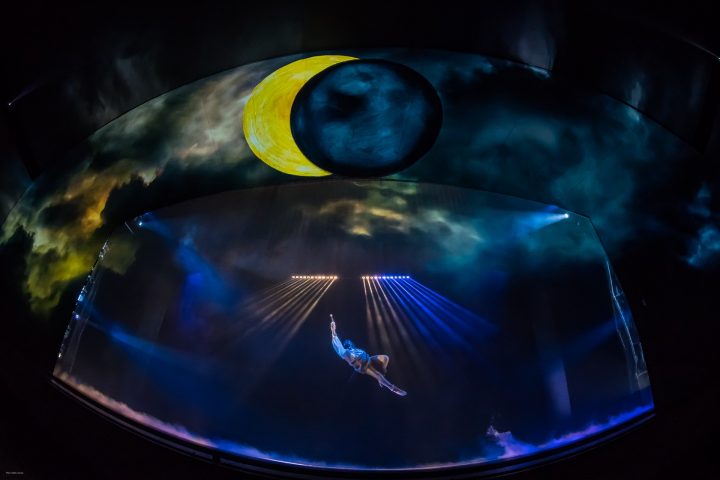 Five Kvant Atom laser fixtures (one 15W Pure Diode and four 9W HPS) complete the setup, with a Cambridge CT 6215 set scanner and Pangolin Beyond control system supplied by Laser Entertainment. The use of lasers is extremely effective, preferring an unconventional use – without saturated colors or geometric shapes – but more “organic”, well integrated with lighting.

Finally, the entire lighting fleet is managed by a ETC Gio console, with a backup IonXE, DMX / RDM Net3 nodes, with ETC and ShowControl network gateways, all under the sACN protocol. Lights, Laser, Video and Audio work on a single Timecode. 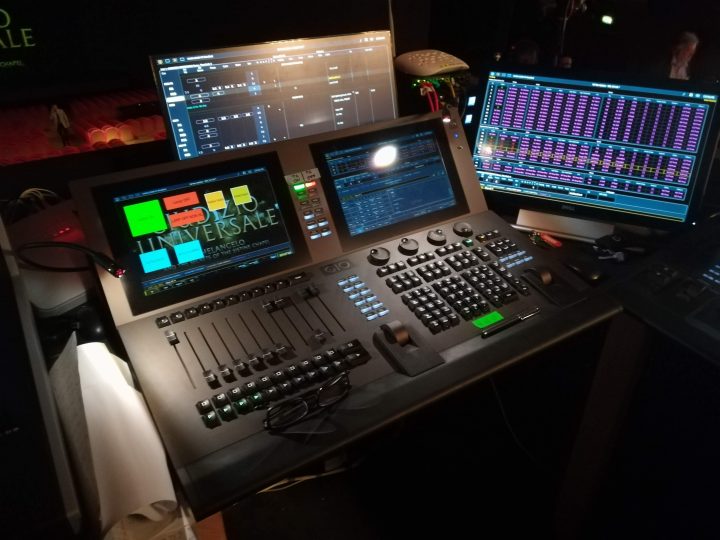 Needless to say, the show is really something unique, which truly deserves to be experienced. A combination of technologies and professionalism have come together to create a production that will undoubtedly stand the test of time, one that in several places left us literally breathless. This is not down to the single products used, or their ability to create amazing effects, but for the fact that all these products have worked together in a simple, precise, organic and almost natural way. This really gave us the impression of traveling through time, finding ourselves in a different scenario with each passing minute.