“Immersive experience” is perhaps one of the terminologies, alongside “mapping” and”3D audio”, that will probably soon be of common use. Sometimes, however, these terms are used inappropriately and in an inflated manner. Why, just recently I saw an advertisement for a village party at which a slideshow projection on 2 buildings around the square was defined as “immersive experience”. Enough said…

In contrast, one show that truly expresses this immersive experience is that of “Giudizio Universale. Michelangelo and the Secrets of the Sistine Chapel“. The show is produced by Artainment Worldwide Shows, informed by historical information provided by the Vatican Museums, all staged within the Auditorium Conciliazione in Rome.

We had the opportunity to attend a presentation reserved for the press, where we were able to closely observe the contribution of the technologies used to create the spectacle. Namely Panasonic, Claypaky, Bose and Riedel (the latter during a second dedicated meeting). With this, we considered the concept, implementation and responses of a show produced to the highest of qualities, and one that will surely be discussed on an international level.

The Sistine Chapel, one of the most notable places in the history of world art, is at the centre of a show that is born from the fusing of many different artistic forms. On the one hand, the physical action of the theatrical performance meets the immaterial magic of the special effects, whilst on the other, advanced technology puts itself at the service of a story with words and images never before presented in such a manner.

The immersion of 270° projection transports the audience to be the very centre of the sistine chapel. The show, conceived by Marco Balich, brings together some of the greatest international talents, who together with video content offer the public a unique sensoral journey.

Giudizio Universale has a duration of 60 minutes, during which time the audience learn the story of the birth of the masterpiece of Buonarroti, from the commission of the frescos on the vault by Giulio II, to the realisation of Giudizio Universale, with a re-enactment of the Sistine Chapel as the place of the pontifical election.

Through the story of Michelangelo, the frescos come alive, presenting the place of one of the most fascinating and mysterious rites of spirituality: the Conclave.

Conceived to become a regular performance, with both Italian and English version, the show has a sales forecast of around 460,000 tickets per year. Billed as an unmissable event, the show is a must-see for the millions of Italian and international visitors that choose Rome as their holiday destination every year. Indeed, this is an appointment for art lovers and school children alike!

Even Marco Balich, who describes the genesis of the show in a recorded speech, states that Giudizio Universale, with 102,000 tickets already sold, will remain on stage for a long time, becoming in fact the first permanent show of its kind in Italy.

The experience, an ideal ending to a visit to the Sistine Chapel, transports audience members to environments such as the inside of St. Peter’s Square during the election of the Pope, or inside the chapel itself during its construction.

Let’s start our description of the technical aspects of this particular production with contributions from Bose Professional, who supplied the custom-made multi-channel amplification system for the entire room – configured and set up by installer Auris Populi. Unlike any musical event, where the audience follows the show facing the stage, Giudizio Universale sees the audience totally immersed in the artistic experience. The entire upper vault and the space around the stage are covered by projections that recall, in four acts, the history of the Sistine Chapel. To support the visuals, an audio system capable of doing the performance justice was required, in order to enable the audience to become an integral part of this three-dimensional journey. 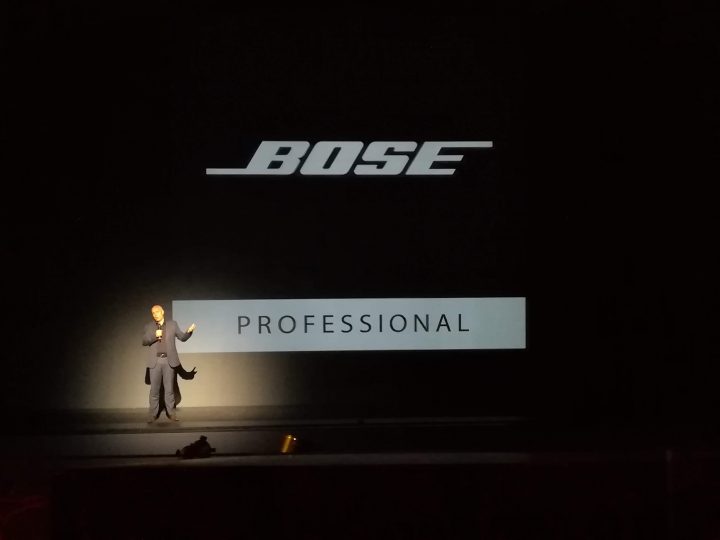 After a brief introduction from Hans Vereecken – Bose Sales Manager – we received a quick overview of the technologies employed, and the testimony of Bose’s commitment to this particular project. Marco Itta of Auris Populi carried out an in-depth analysis, starting with the four fundamental parameters that the installation had to respect: the total homogeneity of the sound, retaining immersion, using a reduced number of speakers and achieving a high quality sound image. The setup sees the combined use of two flagship Bose systems, RoomMatch and ShowMatch, used respectively to provide Surround and Over-Head sound. For the surround, 14 RMU208 were used for L + R and 4 for behind the audience.

In this case, Bose’s DeltaQ technology has allowed for optimal image and directionality over the whole area, with a reduced number of units. The compact size speakers includes Bose EMB2 compression drivers with 2″ voice coil, to guarantee a response on medium/high frequencies comparable to that of full-range modules. The EMB2 driver includes a patented phaser that reduces distortion and allows the use of a lower crossover frequency, thus improving the vocal range. An 8″ Bose LF8 double woofer completes the band up to 80 Hz, while a constant directivity horn (90 ° x 60 °) guarantees a wide and uniform coverage. This horn also has the ability of being rotated by 90°. 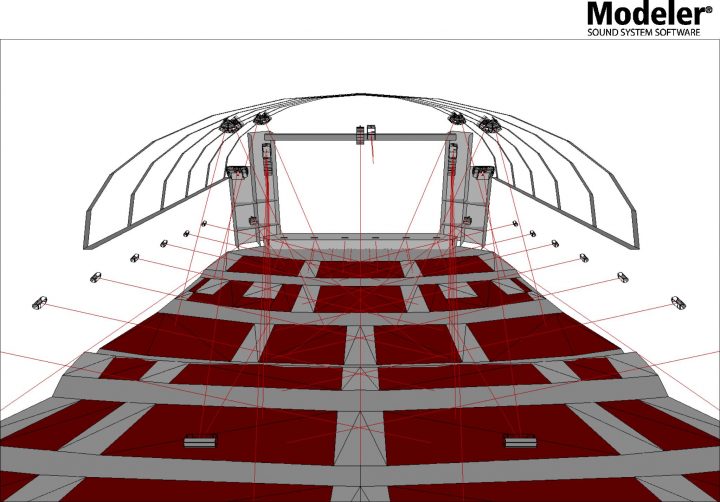 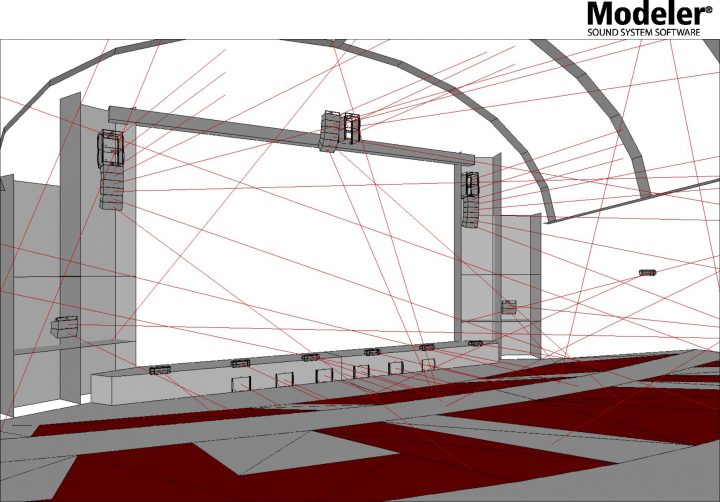 Another important aspect for a quality immersive sound is the over head sections and the delay management. In the first case, the designers specified 8 RM 120-40 modules with 120° x 80° dispersion, whilst for the delay, they used 2 RM 120-60. The PM 8500 N power amplifiers and the final rack consisting of 2 Yamaha SWP1-8, a Bose ESP1240, 3 Bose Power, complete the setup. The RM and RMU systems are managed by PowerMatch / ESP amplifiers, while the SMs are amplified by 4 Powersoft X8 / D. 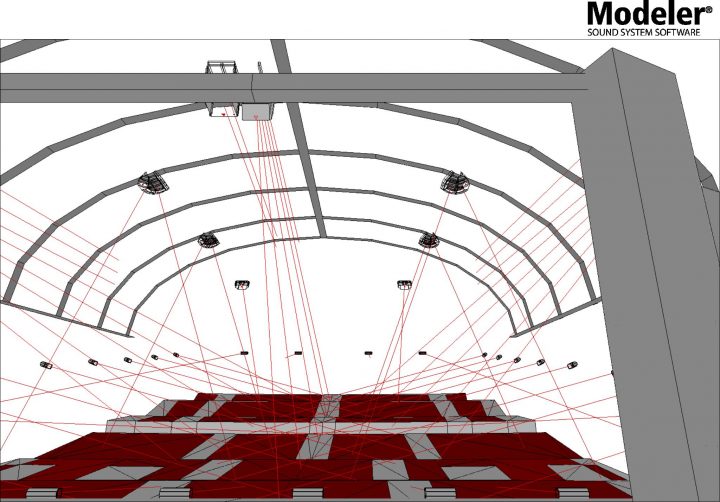 For the team of Auris Populi, Giudizio Universale has proved to be an interesting and unprecedented challenge, with a total of roughly 4 km of wiring between power and signals. This required some special considerations to be made, especially regarding the rigging, where they had utilise creative methods to make use of the limited space and the need to hide the audio sources around the huge vault, as well as leaving space for projections. These considerations make the final result particularly outstanding, with excellent intelligibility from every point of the room and a pleasant listening experience that integrates perfectly with the projections. 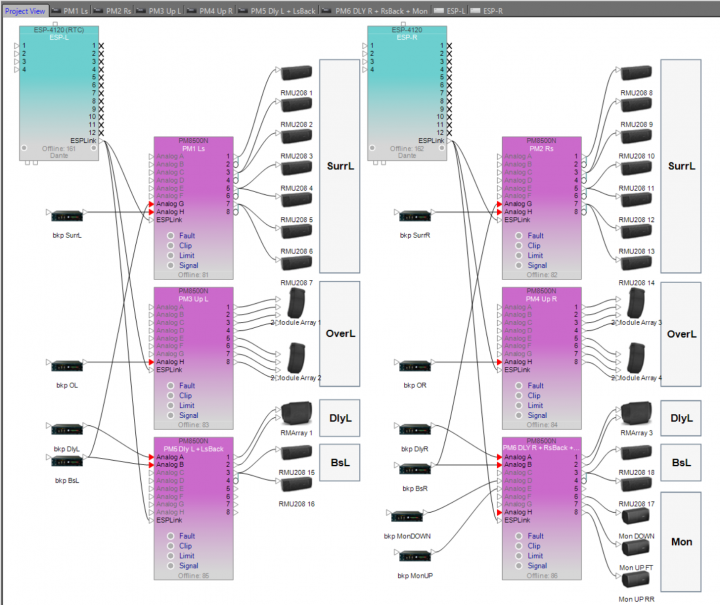 Turning to the management of communications, we find a Riedel system in control, operating through a Artist 32 master station, with two nodes and two antennas for 16 Bolero bodypacks. During the installation, cabled communications were also used, due to the presence of the troupe of authors, directors and production crew during tests. The master station for 16 units is equipped with two antennas, positioned in a direction that ensure coverage of the entire main space, whilst a third antenna is positioned in the foyer for communications with the rest of the theatre. A recorded voice called “Show Call” provides the calls that organises the technicians during the show and dictates the times for the movements.

For such an event, it is essential, as it is for every live event, to guarantee communication between the show’s staff, especially when there are stage movements that are an integral part of the show. In these cases nothing can be left to chance, in order to preserve both the impact of the show and to safely manage the safety of those involved.

Serkan Guner, Riedel’s marketing manager, and for the occasion our host, summed this up nicely. “Imagine Sebastian Vettel on his formula one, arriving at the end of the straight line and not receiving an important communication from the engineer about the track and the temperature of his brakes. The reliability of the car and the safety of the driver, due to a simple absence of communications, could be in danger.”

After what we have seen concerning the audio technologies, Giudizio Universale has proven to be a production that holds a high-focus on the quality of the materials and the high levels of professionalism of its staff, without making sacrifices in order to cut expenses. This is the first stable Italian production that has looked beyond national borders, right from the conception and design phases, with a success that is already clear to see.