Belgian-based creative engineering specialists WIcreations are involved in the design and fabrication of three bespoke set elements – all optimised for air freight – to be used on a series of epic outdoor shows on Roger Waters’ current “Us + Them” world tour, which launched with two seminal shows in Rome and Lucca, Italy.

A pair of elegant 16.6-metre-high circular PA towers grace the stage, complete with integral tracking systems on the onstage side for the rigging of 10 moving light fixtures, and on the downstage side for the sound cluster’s wind brace. 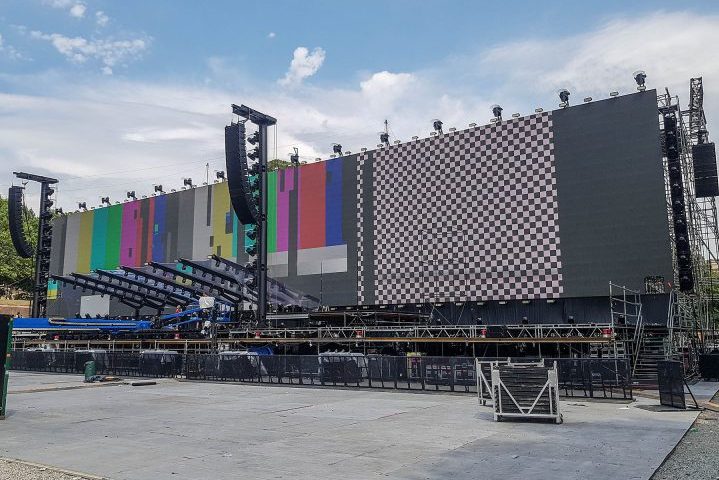 The second WI object is an industrial style stage roof – ‘roofette’ as it’s known on the tour – comprising a set of imposing cantilevered steel beams which can be fitted with clear roof skins in case of rain.

The third area in which WI is involved is a truss and beam rigging system, devised to securely rig and retain in place the impressive 65-metre-wide upstage LED screen.

WI’s account and project manager Koen Peeters is overseeing all the WI elements, after being approached by Jeremy Lloyd of Wonder Works, the tour’s production designer. The creative director is Sean Evans and Chris Kansy is the Us+Them tour’s production manager.

These sleek PA towers are completely different to anything expected at a standard gig. Each one is a half metre diameter, matt black coated round steel tube, for a fully streamlined and modern aesthetic.

The PA rigging cradles holding the slim Clair Brothers arrays are rigged to the towers via an i-beam hoist system. The hoists are at the base of the tower and the arrays are built and raised up until complete. Then an adjustable stabilising arm is attached to a trolley riding up the mast while the whole assembly is flown up to trim height.

Another 1 tonne hoist is attached to the base of the tower with its steel travelling up the offstage side of the mast, hoisting a stack of 10 Robe BMFL moving lights up along the integrated PA mast track. Individual transparent rain shields offer clean looking and effective weather protection for the moving lights. When in position, these form a perfect perpendicular line of downstage lights each side.

The masts have been constructed in 3 metre sections to allow for packing and air freighting, in particular for the final three ‘fly-away’ gigs at the end of the Latin American leg of the tour in October.

The brackets into which the BMFLs are clamped and pulled up the masts will also accommodate different types of moving lights.

Seven identical cantilevered heavy-duty steel roof beams mark out the 18-metre-wide by 12-metre-deep stage space which constitutes the band performance area, all keeping with the industrial vibe of the overall stage design. Variants on this theme have been a characteristic of Roger Waters’ live looks over the years.

Each roof beam features eight integral Martin Mac Aura LED wash moving lights and all the cabling required which is enclosed in the beams. The Auras plug in with a short 25 cm tail maintaining the tidy, high-quality finish prevalent throughout the whole stage area.

The roof beams are pinned to a sub-frame structure below stage that hold them rigid and rock solidly in place.

On the end of each roof arm is an SGM Q7 LED strobe / flood fixture.

One of the stipulations for Koen and the team was that the whole roof structure had to be capable of being constructed manually … for scenarios where work can continue even when it might not be possible to get stage power and run hoists, etc. during the get-ins / outs.

As with all WI structures, the weight and volume have been minimised, it breaks down and travels in a series of dollies, and all goes together extremely quickly on site.

Transparent roof skins – six identical sections and two side ‘batwings’ – can be slotted in to the channels along the tops of the roof beams if the weather is looking dodgy! 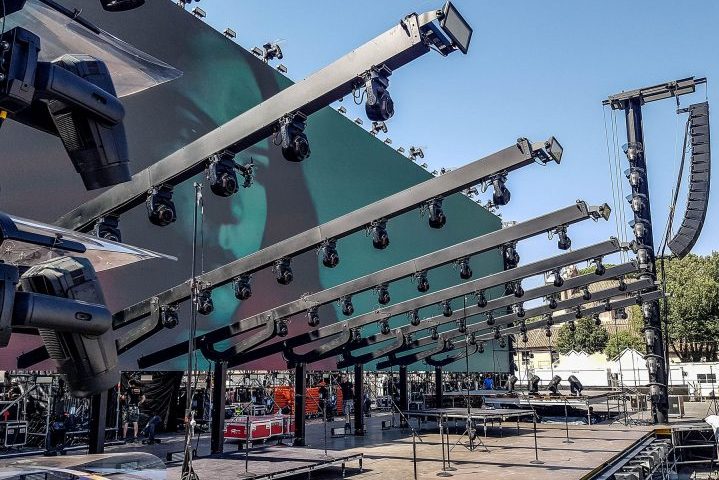 Video and visuals have always been an essential part of Roger Waters live shows which are a cerebral mix of music, activism and thought-provoking juxtapositions.

The 65-metre-wide by 12-metre-high video wall is being supplied to the tour by UniPix from the UK and is built in situ in 7.5-metre-wide sections.

Each section is guided into place via two vertical beams which are attached to the upstage scaffolding structure, which is locally supplied to the tour’s spec. The WI team come to site and prepare the trussing supports with integrated diverter beams, then fly the completed truss in sections on top of the scaff wall. Each screen section has several carrier wagons rolling along the vertical tracks, allowing the screen to be built from the ground up.

This methodology ensures that each 7.5-metre-wide x 12-metre-high section – and indeed the whole screen – is held firmly in place and wind-braced right from the start of the build process to the final moments of dismantling during the get out. This reduces the risk that the screen sections can rapidly turn into giant sails if the wind gets up.

Each screen section weighs 4.5 tonnes and is lifted into place via the tracks with two 2.5 tonne motion-controlled hoists. The hoists sit upstage in dedicated dollies, also part of the WI package, and they travel with the universal production set.

A 40 mm gap is left between the screens whilst they are brought up to trim height to avoid scraping and grinding during the build, and are then moved sideways and interlocked precisely and seamlessly together with the next section.

There are another 15 moving light brackets attached along the top edge of the screen to which 15 more BMFL Spots are attached, with 43 x Q7 blinders along the top and an additional 43 along the bottom of the LED surface.

The tour is carrying two systems of PA Towers, video screen rigging structures and two roofette bases, and the gig build schedule is based on two advanced days and one production day at each venue.

WI is supplying two crew for each advance system – so 2 x 2 – plus one on the universal production team.

The next outdoor shows will be in October on the Latin American leg of the tour.