Small fixtures are a solution for so many different scenarios where space is tight and weight loading is low … and Robe’s Pointes, Spikies, Spiiders, LEDWash 300s and CycFX 8s proved themselves invaluable when lighting designer Wouter Vebeke had to squeeze a somewhat ambitious lighting rig into Mercardo, Antwerp, for the band Arsenal’s new album launch. 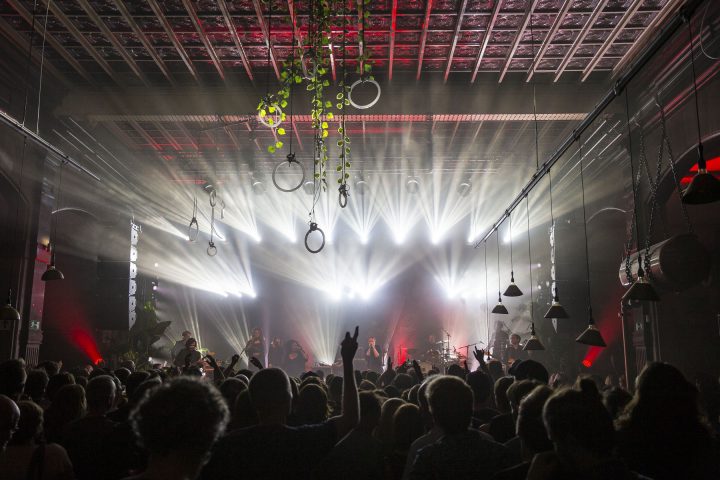 Wouter has worked with Arsenal – the name came from a World War II weapons depository adjacent to their studio in Brussels – since 2011. They are one of the most popular bands in Belgium, known for their dynamic mix of electronic music and fusion of multiple genres to create a unique sound that’s earned much international acclaim.

They wanted a special location for the launch of their sixth studio album “In the Rush of Shaking Shoulders”, an album which explores themes and theories related to chaos v structure. After throwing many ideas about, band leader Hendrick Willemyns hit on the Mercado. Originally part of a grand city centre post office building and more recently reinvented as a funky indoor food market, Mercado is used as an event space, and is on the Groenplaats, right in the heart of the city.

The challenges were many! With 10 band members and a small stage, space was always going to be an issue. The band wanted to create a jungle onstage – as a metaphor for the ‘chaos’ part of the new album, so a veritable forest of greenery and plants made up the stage set!

Added to that, two emergency exits either side of the stage needed to remain clear, rigging was limited and the ceiling was low … all of which were key to the evolution of the lighting design along with the ‘Squeezability’ factor which enabled him to shoehorn 80 Robe moving lights plus other fixtures into the venue!

Wouter extensively researched the available lighting positions … and from that, a lighting plot gradually emerged. He also wanted to weave the unique setting of the venue into the overall aesthetics of the gig.

A heavy frosted glass ceiling is another feature of the venue. Iin a gig set up it is immediately above the audience, which meant that daylight would be flooding in for part of the show. However Wouter also seized on this to create a special ambience and some way cool lighting effects for the jungle!

He wanted to create a strong structural form with the lighting that was juxtaposed against the unpredictability and surprise of the jungle, for which he needed lines.

In terms of lighting, Wouter feels Robe’s Pointe perfectly personifies a line – a neat, powerful clearly defined shaft or line of light which can be affected, changed and varied.

The flexibility of the Pointe meant he could use them as back-lights and the speed and their multi-functional characteristics allowed him to effectively get four different lights from the same units!

The 25 x Pointes were rigged on a mid truss, a back truss which was hidden by the foliage … and on the floor.

The CycFX 8s were positioned on the floor left and right and illuminated the tangle of trees and plants!

Wouter mapped the individual LED pixels in these and created an abundance of sparkly, twinkling effects on the foliage. The light from the CycFX 8s also had to generally find its way through the density of the jungle which produced some interesting and unexpected lighting effects.

The LEDWash 300s proved perfect for front lighting. “Small enough not to disturb the sightlines, and well powerful enough to do the job,” says Wouter with some satisfaction. LEDWash 300s also lit the jungle elements from the front, where he needed a tiny fixture with a large zoom!

The 20 x Spikies were rigged on four Totems in the side-stage boom positions, five Spikies in a vertical line on each truss section. The tiny size of the fixture made it a perfect fit for ensconcing between the structural pillars of the building along the sides of the stage.

Wouter loves the Spikie for its speed, the flower effect and the big front lens. Being in close proximity to the band, low heat emission was also a benefit!

The Spiiders were installed above the glass roof outside the building and enabled him to colour the glass and throw lighting into the room from outside … so as the sun set, he could compensate with artificial lighting. Some surprises for the audience included a strobing ceiling during the later stages of the set, although the one slight regret was he “could not run DMX to the sun!!!”

Still – it all adds to the fun leaving a few things to chance!! 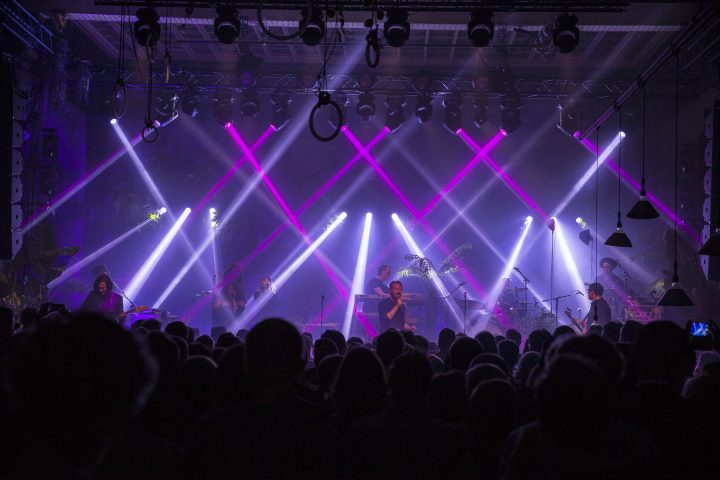 The gig was a massive success and created a lot of excitement and anticipation for the album!

The unconventional venue and the jungle set was an inventive combination, and Wouter enjoyed finding new solutions to light the show and create the right mood as well as the programming process for each song, working out which lights worked best with the music in an inspiring environment.

He used a ChamSys console for control and there were also some strobes, LED strobes, blinders, plus LED PARs on the floor in addition to all the Robes.

Wouter has been a lighting professional since 1999 and has used Robe moving lights for a long time, the first ones being the ColorSpot 250 series. “It was a great light at the time, and of course the technology has since developed and enabled the design of fixtures that we could only have dreamed of back then”.

He’s worked extensively with all Robe’s LEDWash series luminaires – which started in 2010 with the launch of the LEDWash 600 – and right now, his favourite Robes are the LEDBeam 150, Spiider, Spikie and .. “of course” the MegaPointe!

He thinks it’s been great to see Robe grow into one of the biggest and most prominent moving light brands. “It’s the consistent high quality, functionality and reliability of the fixtures that is most important for me,” he concludes.