A complete VIO L212 active line array system, completed in the low frequencies by the VIO S218 active subwoofers, will be the main PA chosen by the production for the summer outdoor events that include the most prestigious stages of the Italian festival season.

After the first appointment, last June at the Sherwood Festival in Padua, the dates will run throughout the peninsula from July 3rd at the Milan Summer Festival for a total of 24 dates.

For the date at the Sherwood Festival 16+16 VIO L212 modules were used, completed by 8 VIO L210 modules as frontfill and 24 VIO S218 active subs in cardioid configuration, controlled remotely by the Aurora Net software. 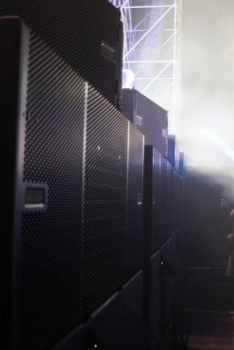 “I had the opportunity to listen to the VIO L212 while it was still in the testing phase” comments Antonio Porcelli, FOH engineer for Caparezza’s live shows and head of audio for the production of the tour. “I have to say that the system convinced me right away, even if I didn’t know the other dBTechnologies systems well, because I had never worked on them.”

Porcelli continues: “In the following months I got to know dBTechnologies better also as a company and I was also impressed by the team of people behind the product, their professionalism and availability. I will not hide the fact that I like to work with a product that is entirely Made in Italy. After several listening sessions I understood that VIO could be the perfect system for the big contexts in Italy, both in arenas and festivals, and therefore also for the outdoor dates of Caparezza.

During the date in Padua I had the opportunity to experiment and explore the potential of PA in a non-standard context, with a park that extends very far. Now I can say that I made the right choice and that VIO L212 is the best system we’ve used so far in live with Caparezza.