These were part of an impressive kit list supplied by leading French rental specialist Dushow, and it was the greatest number of RoboSpots to date on a French tour!

Each RoboSpot operator positioned behind the stage controlled two BMFL WashBeam moving lights running in conjunction with two RoboSpot MotionCameras. The compact moving head cameras were rigged in front of the BMFLs on a ‘magic arm’. 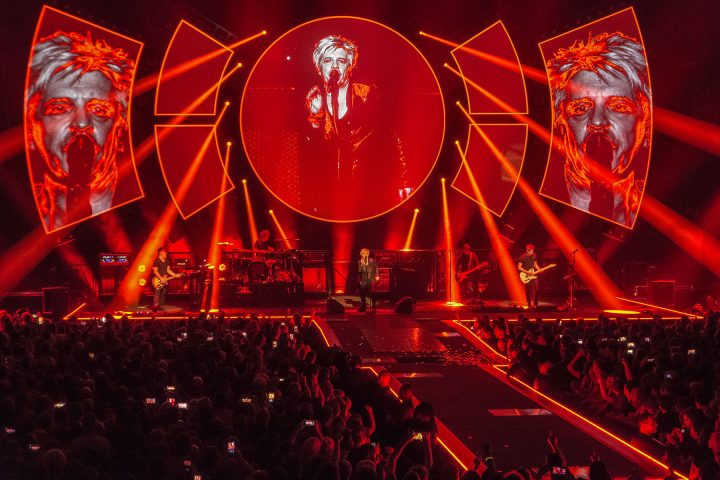 Three BMFL WashBeams being used as follow spots were positioned on the front truss and the other three on the central ring of a large circular video ceiling installed over the audience.

The RoboSpots were instrumental in the scenography of the show. The 34 metre diameter video structure flown above the audience made it impossible to set up traditional follow spot positions at the back of the arenas, and asked how he might have positioned follow spots without the RoboSpot system on-board, Thomas laughed and retorted that he “really” did not know!

However, Dushow’s team which had just purchased six RoboSpot BaseStations and MotionCameras, immediately suggested this solution, and Thomas was relieved not to have to face that challenge!

Kevin Migeon from Robe France arranged RoboSpot demonstrations and tests for Thomas to ensure that everything he wanted to do was viable. Throughout the tour he also communicated the operators’ feedback to Robe’s R & D team in the Czech Republic, who are constantly monitoring and developing the system software in response to the user requests.

The RoboSpot system proved straightforward and logical for the touring operators to learn.

Two of them were relatively new to the art of follow spotting while the third was an experienced ‘traditional’ operator, and all quickly learned how to handle the system and were delighted with the flexibility and many possibilities, and with features like preset position reminders and the sensitivity of the camera when tracking in the dark.

“The operators became really comfortable with the system and I am very satisfied with the results,” confirmed Thomas. 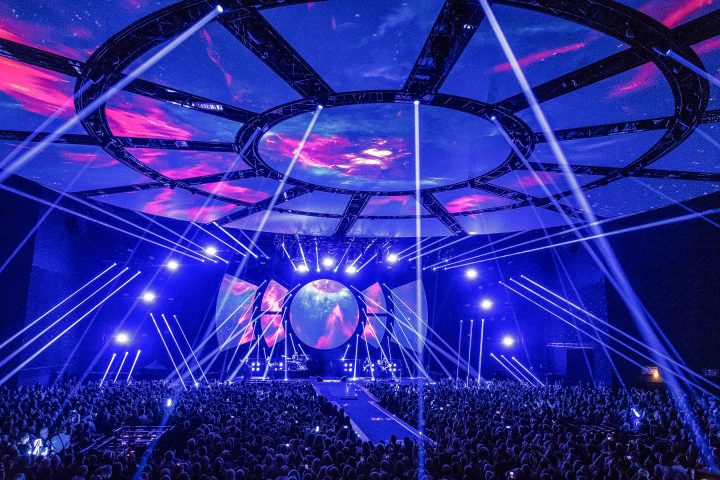 As the artistic director, Nicola wanted an immersive setting which pulled the audience right into the performance, similar – but differently achieved – to the previous tour, where the audience was surrounded by video.

This time it was the ceiling concept which was inspired by the glass roof of the Vittorio Emmanuel II gallery (Italy’s oldest active shopping mall) in Milan that underlined that connection with the audience which is so fundamental to the band’s performance. Their fan base is very loyal and mixed, with some having followed since the very start of their hugely successful career launched in 1981!

The challenges posed by the scenography actually allowed the attributes of the MegaPointes in particular to shine through:

“We wanted numerous projections, so I was looking for a product powerful but small enough to be concealed and not compromise the video,” says Thomas, so 48 x MegaPointes were positioned around the screens, 24 around the upstage surface and 24 on the audience circle.

As the screen structures themselves were quite heavy, the lights had to be light as well as small, at 22 Kg – producing an impressive 2,200,000 lux at 5 metres – the MegaPointe fitted the spec perfectly.

One hundred and twenty LEDBeam150s were positioned in and around the MegaPointes to bring extra volume to the stage.

“Here we needed a small source that could be used in large numbers to open up the stage,” stated the LD. With ceiling trim heights varying between about 16 / 17 metres up to 30 metres, they wanted those ‘point-source’ fixtures to be able to stretch and scale the visuality of the stage. 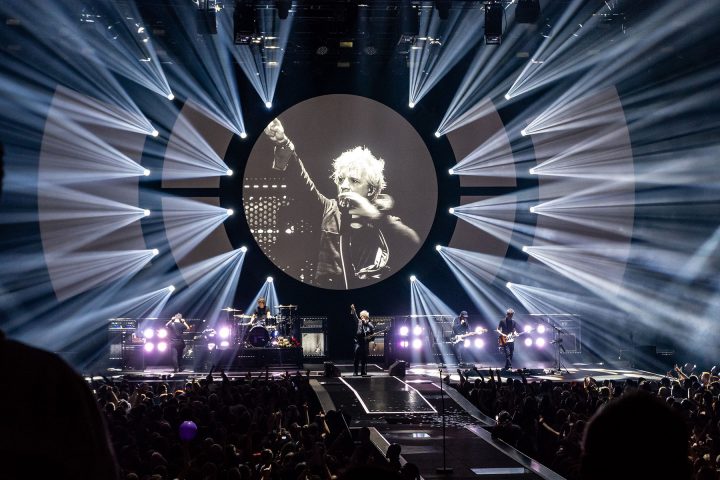 Thomas really appreciates the power versus size of the product, as well as its zoom and speed.

The 40 x Spiiders were also chosen for their size / power ratio and were positioned in three places. Eleven upstage in the background reinforced the depth of the set, five were on the rear truss to light the stage and band. The remaining 24 were all rigged on the circular audience ceiling, where they were great for illuminating the audience and engulfing the whole venue in colourful atmospheres connecting band, audience, lighting and video.

Also on the circular ceiling were 12 x BMFL Blades to complete the Robe count!

Thomas thoroughly enjoyed lighting Indochine in this stylish scenographic world where video and light worked together fluidly and harmoniously.

Controlling the show via two grandMA 2 lights, Thomas and his assistant JC (Jean Christophe Aubrée) created a dynamic and diverse show combining technologies, fixture placement and colorimetric calibrations which were fine-tuned to provide a fantastic 2 hour intergalactic space adventure for the audience … into the world of Indochine.

For Dushow, the newest Robe investments made for the tour have been a major success. Following excellent feedback from the operators, their stock of RoboSpots has already increased from 6 to 20 systems!