Tom’s company Dragonfly Lighting provided a Robe specials package including 12 x MegaPointes, 24 x BMFLs, 24 x PATT2013s and 12 CycFX 8s to cover the four shows and assist him make each one a personal and memorable experience for Turner’s eclectic and loyal fanbase. Tom also used elements of the house rig including 18 x LEDBeam 100s. 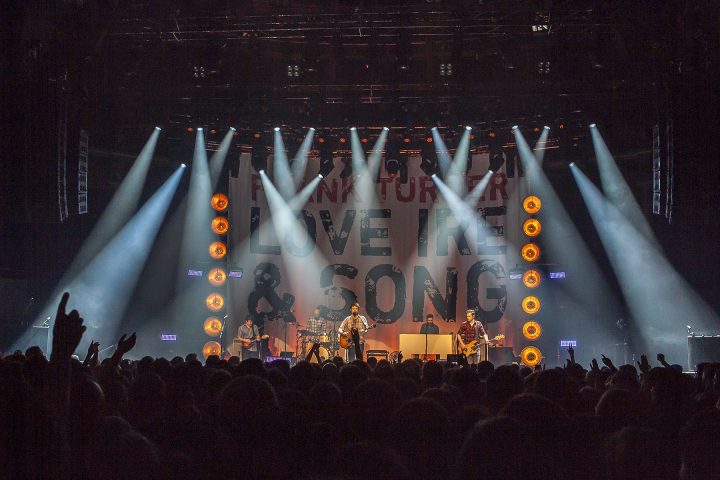 Tom, who has worked with the highly regarded artist for about a year, really enjoyed the process of creating the four dynamic environments for which he programmed four diverse lightshows, each equally crafting a different ambience for the stage.

The first night features a snappy touring set – they have recently finished a UK tour – for which Tom needed flashy, bright, punky and folky lighting and chose a mix of traditional and contemporary lightsources as specials, with 12 x MegaPointes on a large box truss in lines of six, a concept he’d used successfully on the tour, rigged as two 10 metre back trusses, one sub hung below the other.

These were juxtaposed with some Cinelight MaxiBrute 9-lites as the other main lighting fixture. Between them, both fixtures provided high-impact classic flourishes of rock ‘n’ roll.

The music was fast-paced and varied, and the specials also included five TV screens that were fed IMAG content from five GoPro cameras.

The second night was the 10th anniversary of Turner’s seminal “Love, Ire & Song” album, for which he and his band played the complete album.

The visual focus was a large new backdrop inspired by the original album cover artwork which was far upstage, initially covered by a black and revealed via a kabuki drop.

Edging both side of the backdrop, Tom positioned Robe PATT 2013s for a touch of retro, referencing the decade back in time, and lit backdrop highly effectively with eight CycFX 8s which were extremely handy as they could be moved and zoomed extremely quickly to throw different effects onto the backdrop. 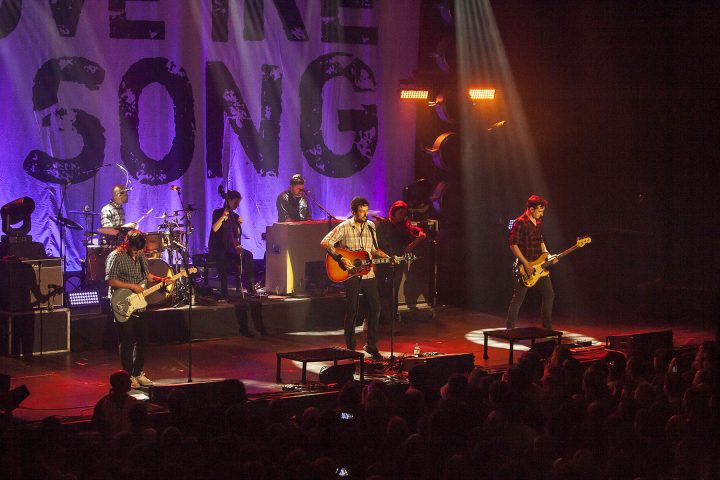 The third night, Turner performed solo. Stripped back and raw in appearance, visual features included a smaller backdrop with a circular logo and a black behind it, surrounded by a square grid of PATT 2013s leaving a space in the centre.

CycFX 8s were again concealed behind the backdrop so the colours and textures of the cloth could be varied using the 24 x BMFLs positioned on the upstage and mid trusses.

The nice tungsten glow of the PATTs set the scene, ideal for the effect as the intensity could be bumped up for the singalong moments.

The fourth night was a collection of high energy tracks for which Tom needed a bit of flash-and-trash in the lights! Another backdrop was installed, this one with a bigger circle than for the solo set with additional CycFX 8s positioned to highlight its 40 ft. width. The backdrop was also dropped in lower so the upstage BMFLs could blast through for intense back-lighting effects.

Six MegaPointes were rigged along each edge of the backdrop with a border of LEDs and blinders along the other two edges.

The PATTs were prominent in all the designs at the insistence of production manager Dougie Murphy. Fourteen, rigged in the two strips were in action on night two and 24 on night three were arranged in the square grid formation.

They are a special favourite of both Dougie and Tom, and their architectural appearance created just the right vibe for these two nights which were dramatically different musically. Tom was happy to integrate this specific request from his PM into his design and augment each night as necessary using fixtures from the house rig including the Robe elements.

The BMFL Spots stayed on their respective trusses throughout the four nights, while the 12 MegaPointes changed positions but were in use for all shows.

Picking bright and multifunctional lights like MegaPointes and BMFL Spots gave plenty of options. He loves the MegaPointes for their crisp output and accurate colour mixing, because they can illuminate a massive amount of space, and “are just generally fantastic bang-for-buck!” 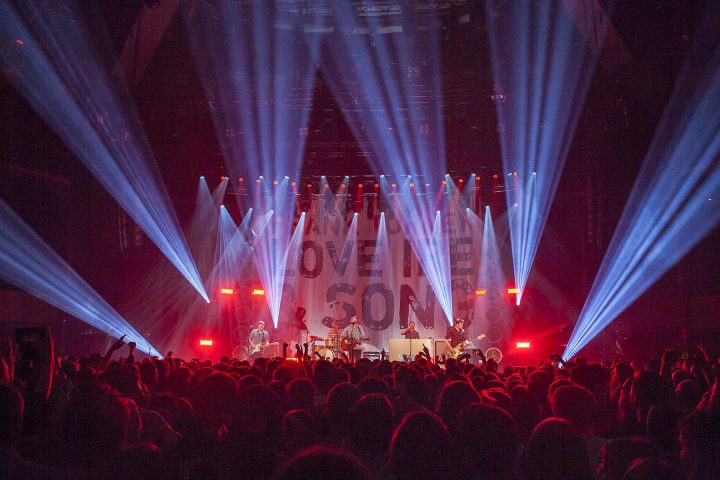 With the challenges of programming four high profile back-to-back showcases, Dougie had allowed plenty of time for everything to happen and ensured details like enough crew onsite at the right times for the re-rigs and changeovers to run smoothly.

Producing four totally different shows required time and concentration. Tom himself is into the music, however due to the loyalty of many Frank Turner fans, he knew for this project there could be no shortcuts or same effects used twice!! With so many of the audience attending for two or more shows, the pressure was on to present an authentically different look each night!

“Having all these Robes to hand meant it was a very easy rig to use – I could use the BMFL Spots and MegaPointes for hard edge spots or warmer, softer more wash style sources … it was an extremely flexible rig, and these were the perfect tools”.

It was also the first ‘full-rig’ shows on which he’d used Dragonfly’s recently purchased MegaPointes..

Dragonfly Lighting is an energetic and rapidly expanding young company based in Banbury, Oxfordshire, UK, which currently has a growing stock of exclusively Robe moving lights.

Formed by Tom five years ago and run together with his wife, Stella, Dragonfly’s core vision is to supply lighting equipment and services geared towards the needs and demands of working lighting designers like himself.

Tom and the company’s schedule is busy right now … they are supplying lighting kit for LD Miles Weaver on the road with the highly talented Mura Masa, and Dragonfly is supplying lighting production to the Strawberries & Creem festival in Cambridge for designer John Rogers, plus a host of parties including at the sought-after Shoreditch House members club.

Frank Turner continues touring in the US and will return to Europe in the autumn.