Widely regarded as ‘The King of Latin Pop’ and one of the most successful and popular Hispanic/Latin recording stars of all time, singer/songwriter and record producer Enrique Iglesias strutted his high octane stagecraft for the latest European section of his “Enrique Live” tour, complete with a slick, eye-catching visual design by creative director Travis Shirley. 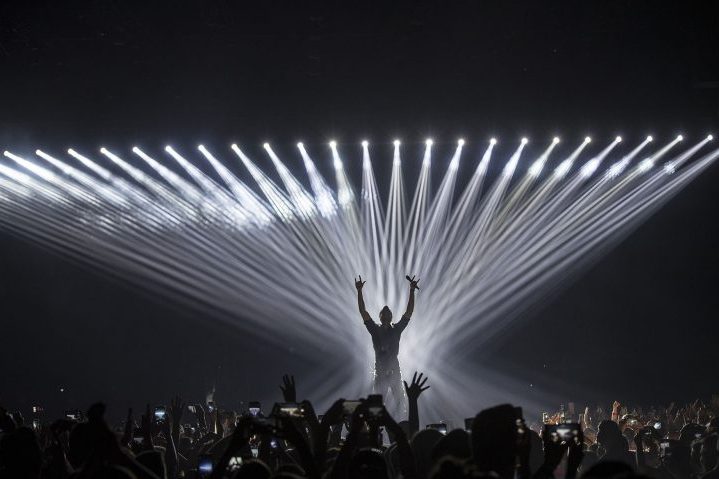 The lighting for the ongoing world tour is specified by Travis as part of his production design which also incorporates video and set, with Robe as the first choice of moving lights.

For this section of the tour, which visited the Czech Republic, Greece and Slovenia, BMFL Spots, Pointes and Spiiders featured prominently on the rig, together with six Robe BMFL Spots used for an integrated follow spotting solution … all provided by leading Czech Republic based rental house ZL Production, working for promoters BG Arts.

Keeping everything running smoothly on the road is Enrique’s production manager Andres Restrepo. The Enrique Live tour started back in July 2017, initially as a co-headliner in North America with US rapper Pitbull, and it evolved from there into own shows, and has since visited every continent. The equipment is supplied regionally as close as possible to the spec, a model very common in the EDM world.

With this in mind, Travis – known for his innovative approach and lateral thinking – knew that the whole design had to look epic yet practical and based on what was achievable in many parts of the world working with a diverse group of promoters, and what he calls ‘regional’ rather than ‘local’ productions of which this was a good example.

He also wanted to give the creative visual concept a few twists and some quirkiness with a modern aesthetic making it uniquely associated with ‘Enrique Live’.

To keep the stage looking fresh and contemporary, this design is based on interconnecting angles and diagonals with an underlying sense of minimal and interesting.

“We know in advance which promoters we will be working with, and with that pretty much which companies will be providing the equipment” he commented, adding that while Robe was their preference, they also have to be ‘open minded’ about fixture substitution depending on what’s in stock, where and when!

The main overhead rig is based on seven trussing fingers, upstage / downstage orientated, each one gently angled and slightly raked, together with the diagonally cropped LED screens and the geometric slants of the set and trussing, they bring architecture to the performance space.

Each of these finger trusses is populated with seven BMFL Spots and these 49 fixtures are the workhorses of the rig, and used for all the stage washes and effects.

Travis picked the BMFL Spot because he needed a very bright luminaire to compete against three large 8 mm LED screens upstage – a 70 ft. wide surface in the centre flanked by two 18 ft. wide strips, all 24ft high. The BMFL Spots are the perfect lightsource in this context.

Onstage, at the foot of the video wall are two levels of band risers running the full width of the stage which are also clad with the same 8 mm pitch LED, so there is a massive amount of LED and lumens onstage against which only the brightest fixtures have any definition and impact.

Six BMFL Blades for band key-light are positioned upstage and shoot through the finger trusses to highlight the band. 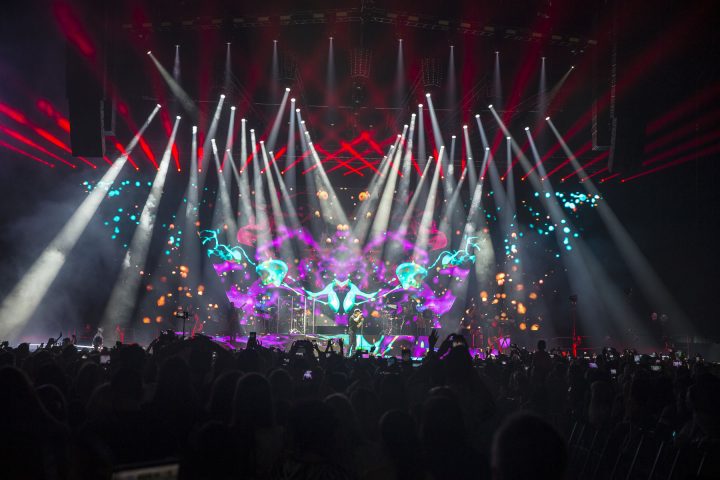 In addition to the finger trusses, the other very striking lighting effect is a 175 ft. wide truss loaded with up to 60 Pointes (36 for this leg of the tour) which is just in front of the video wall, used for a dynamic light wall and a multitude of zappy effects pumping throughout the energetic show. “We basically needed a beam light that could do everything … and there was one very obvious first choice” stated Travis.

There is a sizable runway coming off the front of the stage which Enrique uses extensively to get close up and amidst the crowds, and that plus a short barriered passageway gets him onto the C stage at the back of the arena floor.

Above the runway a truss is loaded with eight Robe Spiiders to provide general washes and blast out into the venue, with another eight Spiiders on the inverted V shaped front truss. Travis describes these as “perfect – an excellent, compact and very bright LED.”

He first used Spiiders on last year’s Old Dominion tour, and admits that they were also THE fixture that made him a believer in LED washes in general! Since that tour, Robe has firmly become his ‘go-to’ moving light brand.

A further two BMFL FollowSpots were positioned at each end of the front truss – where they would conventionally have had operated front truss spots. These were operated by two follow-spotters utilising Robe’s remote RoboSpot BaseStations which were located upstage right.

Another two RoboSpot BaseStations were used to operate two of the FOH BMFL follow fixtures.

Travis first used elements of Robe’s versatile RoboSpot remote follow system on an earlier leg of the Enrique Live tour last year, and has been a firm believer ever since.

“It’s so much easier for the operators being on the ground than on the truss fighting gravity as they are struggle to position and move the light. Being round-based really minimises the wobble factors!” said Travis, who feels it’s a lot safer having people working on the ground than at height throughout the show.

The follow spot system on this leg of the tour benefitted from the very latest RoboSpot software upgrades, and Travis is delighted with the recent news that RoboSpot is now available in the US! 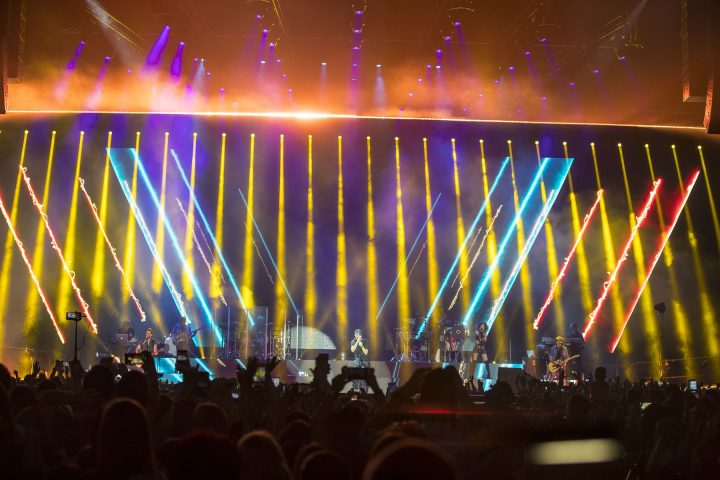 Travis works closely with his lighting director Cassady Miller-Haloren who programmes and operates the show using a grandMA2 console. The two have been working together for a couple of years and Cassady is an integral part of the Enrique Live FOH team. On each section of the tour he deals with all the fixture cloning and swapping, and the day to day administration and set up of the rigs, working closely with the regional lighting production teams.

The grandMA also triggers the Catalyst media servers running the playback video onto the central screens. Content was commissioned by Travis and produced by Lightborne, and for the first time on this leg of the tour, both lighting and playback video were timecoded triggered.

They also usually have around 36 lasers which Travis integrates into the show together with flames, cryo machines and pyro, including a totally badass confetti blast to end the show!

Enrique powers through a mega mix of classics, crowd-pleasing hits, the occasional dramatic ballad and a thundering run of rock-tastic stompers all received with wild enthusiasm by his ecstatic fans. He’s every bit the charismatic showman with an amazing connection to his audience which he puts right at the centre of the show.

Travis has worked for Enrique for 12 years and enjoys a good rapport with the artist. “He is production savvy and we chat a lot about how he wants the stage to look and feel ahead of a touring campaign” explained Travis.

Travis is based in Houston, Texas and via his company Travis Shirley Live Design creates shows for a number of high profile clients including Zedd, Old Dominion, Sam Hunt, Tyler Glenn, 30 Seconds To Mars and many more.