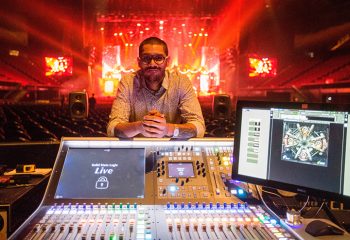 Ricardo Arjona last tour – “Viaje Tour” – drew in more than 2 million spectators. So with big expectations, the Guatemalan artist began his his current tour – “Circo Soledad Tour” – in mid-2017. Arjona continues to fill venues in every city where he performs, from the United States to Argentina.

Dani Munoz is the sound engineer for the tour. As he himself says, most of his work as a live operator before this tour was with artists from the United States and England. Now however, it’s most likely that more and more Latin artists will start to contact him as a result of his work on Ricardo Arjona’s tour.

Dani shares details of his work on this tour, explaining his choices of gear and how connections are made, and his approach to mixing the project live.

LightSoundJournal: Can you tell us about the journey leading up to the “Circo Soledad Tour”?

Dani Munoz: So far almost all my experience as an audio operator had with bands and artists from the United States and Britain. I came to the United States when I was 15, first to Miami and then to Los Angeles. Before this, I had not done much with Latin American artists. A great friend of mine and colleague who works with Ricardo Arjona in the studio recommended me, and thanks to that I received the call just when the promotion cycle of the band I was working with was ending. As they say, “it was meant to be”.

LightSoundJournal: Each show sees a moment when all your planning comes together and becomes a reality. Can you tell us about this process? What requirements did the producers or Ricardo Arjona present at the beginning of the job?

Dani Munoz: For me, the very first step was to study his music and his shows. Fortunately, we live in the Youtube era, which is basically an encyclopedia of live show videos, which makes this task easy. Then we entered into conversations with the production manager, to determine the console that I was going to use and the FOH control gear that would be available. Being an artist of this level, pretty much all the options were on the table for me. This meant that the approach for me was to look for the best option in terms of sound, practicality and modernity. Finally, the rehearsals arrived, which gave me several weeks to get to know Ricardo, the band and the technical team. Ricardo Arjona is an artist who is deeply involved in all the aspects of the show, from the movement of each piece of scenery to each lamp that is lit on the stage. Fortunately, everything flowed very organically. This gave me the freedom to do my job and join their vision of what he wanted to achieve with “Circo Soledad”. In the final stage of rehearsals, when I saw the full show for the first time, I realised that I was part of something very special. There and then, I understood why Arjona is at the level that he is.

LightSoundJournal: What consoles do you use on the tour?

Dani Munoz: I use a Solid State Logic L300 plus, with two ML 32.32 SuperAnalogue Stageboxes.

LightSoundJournal: Why did you choose to work with SSL? Does it offer something special that cant be found in other consoles?

Dani Munoz: Ever since SSL announced that they was launching a digital mixer for live use, I was curious to try it. For this tour, the final decision was partly down to the excellent support team in the Los Angeles office, which is the city where I live. It took me just one afternoon, to sit down with the desk and mix, to realise that this was the best option. None of the other consoles I used matched the sound quality of this one. You really feel the sound when working on an SSL.

LightSoundJournal: How many mixing channels are you running over for each show?

Dani Munoz: 72 Channels in total. 64 of those come from the stage racks on stage, and 8 from local inputs at FOH.

LightSoundJournal: Do you use audio networks?

Dani Munoz: We are using the MADI protocol via redundant fiber optic, through a Blacklight SSL concentrator that connects the Stageboxes with the console. The entirety of our signal distribution is done in a passive Whirlwind SuperTour 3-way splitter, because for monitors we are using a Yamaha CL5 running Dante to their respective stage boxes, making this completely independent. The Whirlwind SuperTour is a passive splitter with 3 isolated outputs, two of which feed my two Stageboxes (SSL ML32.32) and two Yamaha Rio 3224-D, respectively. The SSL is connected via optical MADI, and on the Yamaha CL5 via Dante – Ethernet.

LightSoundJournal: Do you use virtual soundcheck or do you just wait for the musicians before making the adjustments?

Dani Munoz: Virtual sound-checking has been invaluable for me as a point of reference to adjust to each room in which I work. Having a constant in the sea of variants that is live sound, is priceless. The band have a soundcheck for every show, which helps me to take into account the interaction and summation of the room with the microphones, especially in reverberant sites such as arenas and stadiums, which are the norm for us.

Dani Munoz: I have been using from very particular processing from Waves Audio, who for years have been the “ace up my sleeve” and have given me exceptional support. The chain or “channel strip” that I use for him is first a Reinassance Vox, which I use as an expander to mitigate a bit of the noise of the stage and reverberant rooms. This is followed by a CLA76, which is my favourite compressor for the voice, before passing through an HEQ equaliser to shape the tone of the voice. Finally, a C6, my favourite multi-band compressor, helps me to level the vocal in dynamic yet natural way. Something that has been clear from the beginning is that Arjona is an artist whose lyrical content is a fundamental part of his music. People are really going to listen to every work, so every phrase, sigh and detail of his voice has to reach the whole audience, whether it be in a theatre or stadium, first or last row. My work is simple: bring the artist closer to his audience. 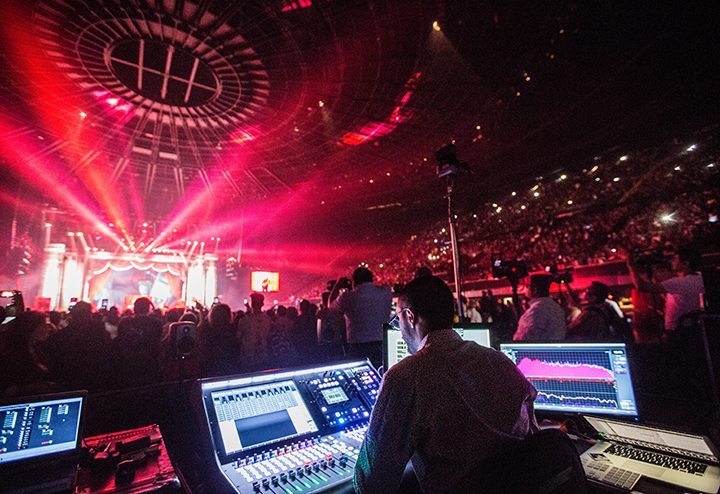 LightSoundJournal: Did the tour give you any tricky situations that caused you to seek any particular solutions?

Dani Munoz: I don’t know if this is very particular, but because of the number of microphones that are active at any one time during the show, with high sensitivities such as violins, acoustic guitars and percussion, I have to be very clear on optimisation of the PA and its relationship with each room we go to. I am very involved in this process, from the design stage and predictions right through to measurement, alignment and configuration. The goal is not only to sound good but to provide the greatest possible consistency from show to show.

LightSoundJournal: Could you give us an example of the PA that you use in the tour?

Dani Munoz: The configuration of the PA depends on the manufacturer and the nature of the venue. One of the best results we have achieved was at the American Airlines Arena in Miami on October 14th. The system used was L-Acoustics, which contained: 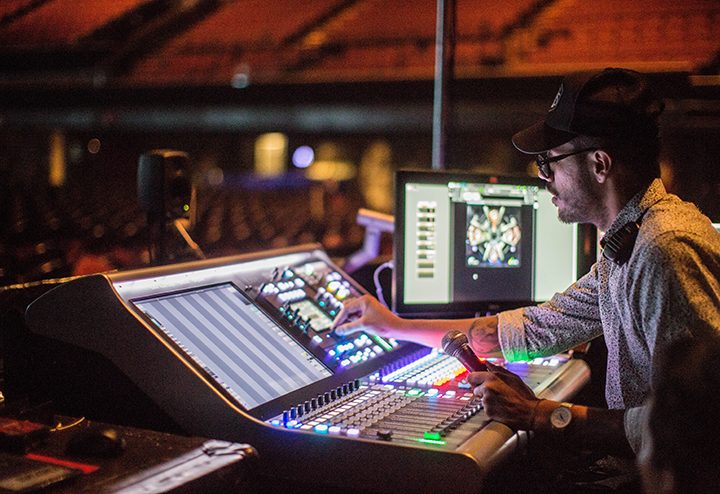 LightSoundJournal: Do you use external plug-ins, or do you only work with the ones offered by the console?

Dani Munoz: I try to work mostly with what the console provides, which in my opinion, is the best desk in the market. I’m also a fan of plug-ins, especially if they give me a particular sound, character or colour. I do all the mix work by grouping into “stem” busses, and that’s where I insert the plug ins, instead of the individual channels. This way I can achieve more whilst  saving on DSP and better managing latency.

LightSoundJournal: What’s in store for you after the tour? Will you continue onto another tour, or will you work in studios?

Dani Munoz: My focus now is on finishing this tour and continuing to work on other studio mix projects. Soon i’ll undertake the biggest challenge of my life, as I will soon be a father for the first time! A balance in life, as in music, is very important!