The band was founded in Stockholm in 1990, and since then has been incredibly successful and prolific, steaming through a full-on career that’s seen them produce multiple best-selling albums and be credited for founding the nuanced metal sub-genre ‘Swedish melodic death metal’. They have built up a loyal international fan-base over time and tour extensively, known for the passion and vitality of their live performances. 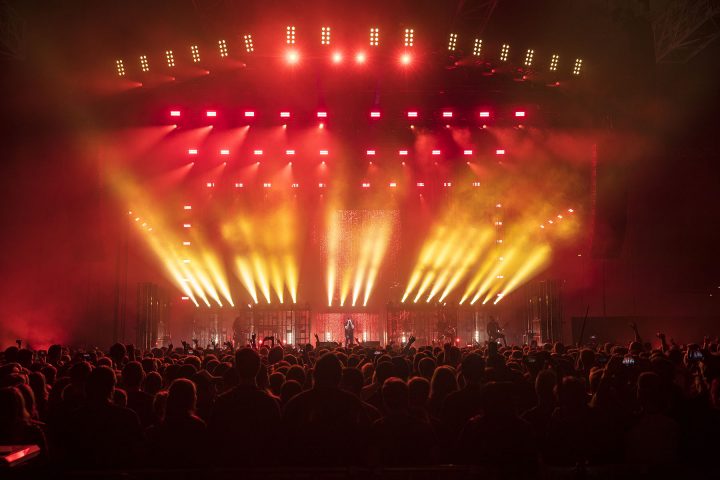 This ongoing tour – with well over 100 shows played so far – is still part of the 2016 Battles album cycle, and the very latest autumn-winter European arena section was a co-headliner with Five Finger Death Punch (5FDP) from Las Vegas.

The production design included lighting, video, set and drapes and was created by Fredrik and his colleagues at Greenwall, together with lead singer Anders Fridén. Fredrik and Anders usually initiate a series of ideas at the start of each tour and then choose from these what becomes developed for the tour.

Being a co-headliner, this leg of the tour saw both bands play a fast-and-furious 80 minute set using a shared top lighting rig, with different specials packages brought in ‘underneath’ to create distinctive looks for each.

Practicality was a major consideration, as the daily schedule was tight, so the rig had to be quick, easy and with all the visual impact essential to make it heavy and rocky.

“For me the BMFL WashBeam was the key,” declared Fredrik, having recently used them extensively on the In Flames summer festival / headliner tour.

He took the base design from that rig as a starting point for the autumn-winter indoor arenas with input from 5FDP’s LD, John Santos who agreed with him that BMFLs were an excellent choice!

“I LOVE that big fat beam and the fact you can zoom it out and still have all the power and punch right to the back of the arena,” stated Fredrik, who has worked for In Flames since 2011. 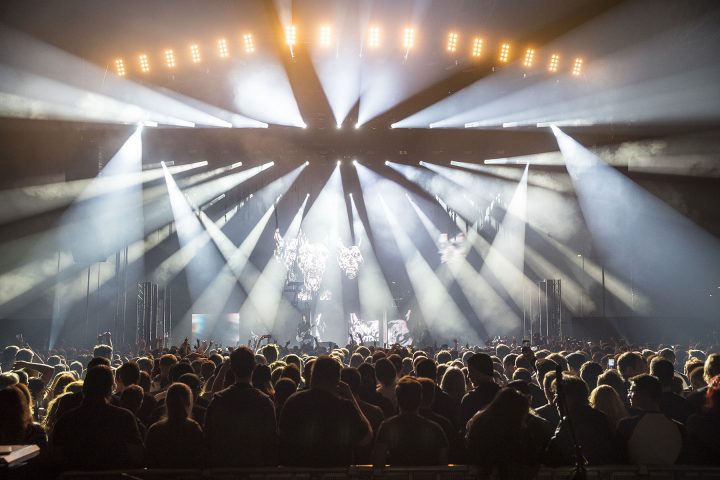 Apart from that, he likes the “fantastic“ skin tones offered by BMFLs, the speed of the fixture, the renowned functionality which includes metal-tastic effects like fast strobing, and other features utilized in the show included fast-spinning gobos and highly defined key lighting for solos.

He also comments that it’s a reasonably priced fixture option for rental companies … which means they are in plentiful supply throughout most of Europe.

He first used BMFLs properly during the 2016 Eurovision Song Contest (ESC) staged in Stockholm … where LD Fredrik Jonsson used 94 x BMFLs for long-throw key lighting of the performers and to light sections of the green room.

On this In Flames tour, he wanted a lot of intense back and side lighting and plenty of strong, bold looks characterise of In Flames’ live aesthetic.

The BMFLs were rigged on four overhead and two side trusses flown in the roof. The shared rig featured 84 x BMFL WashBeams and 54 x BMFL Spots evenly distributed, while the In Flames’ specials package included another 18 x WashBeams.

Of the 18 specials, ten were positioned upstage of the band and used for powerful back light and to shoot through the risers that were clad on 3 sides with 20mm LED screen – part of the set designed by Fredrik and built by Soundforce – with four more WashBeams a side on flightcases to provide dramatic low-level cross lighting.

These 18 units worked hard throughout the set, adding to the general visual excitement with some effects audibly cheered on by ebullient audiences!

It was critical to the design for Fredrik to be able to get up higher than the band with these lights for silhouetting, and also to highlight the keyboardist and drummer against the large and very bright back 20mm LED video wall. 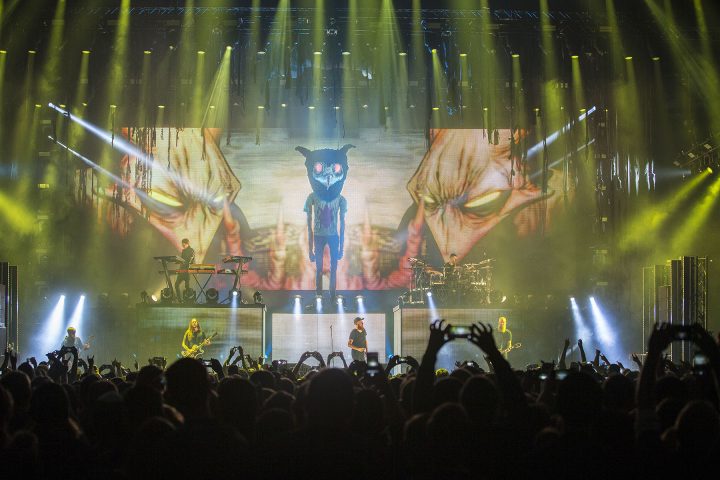 In Flames’ set also featured a large upstage LED screen as part of their specials.

Fredrik thinks Robe is making “some extremely good fixtures” right now. He has always been a fan of the ‘hybrid’ unit, and likes the ‘small and infinitely useful’ philosophy of the Pointe. He specified 120 Pointes for the Summerburst Festival in Stockholm last year.

The In Flames video content was also co-ordinated by Greenwall, some of it specially commissioned for the tour from different artists and then animated by Fredrik and his team. Other elements were new for the tour, mixed together with some re-edited existing live footage.

The video was carefully storyboarded and choreographed with the performance, together with some props like In Flames’ famous ‘Owl Boy’ mascot. This character first appeared in the artwork of second album ‘A Sense of Purpose’ (2008), and has been omni-present through subsequent albums and a regular feature in merchandise designs as well as appearing during live sets!

The show was colourful, with Fredrik sticking to bold single or duo colour combinations to reinforce the dynamics of the band’s set which veers from total mayhem to clanging anthemic power-cords.

Fredrik was assisted during programming by Ishai Mika who was also one of the lighting techs on the tour, and ran the show on a grandMA2 full size. All the LED sources on the rig were mapped including 60 LED strobes, 24 X 4 bars and 18 LED wash lights, and other lighting included 42 beam lights and 16 8-lite Moles.

He spent six days pre-visualising ahead of this autumn-winter tour, assisted by Christopher Engström, followed by three days of production rehearsals at Black Box Music’s rehearsal facilities in Berlin.

Black Box provided all the lighting equipment for this European tour (Litecom DK had supplied the summer tour BMFLs). The video was delivered by Soundforce Sweden; the CAST Green Hippo media servers were from Morgan Brown; the drapes and scenery from ADV in Gothenberg, and the audio vendor was Go Audio out of Hamburg.

The overall touring lighting crew chief was Mark Weil, and the Black Box crew boss was Carla Lumme. Dominik Müller was in charge of the lighting system for Black Box working alongside two techs Rebecka Erixon and Markus Pittlik and closely with video tech Krister Hedgren. Head rigger was Till Bredhauer.