Irizarry comments, “I have been working with Waves tools for several years, and they have always been my first choice when selecting equipment for a tour. When I started to see the possibility of using the eMotion LV1 mixer, the first thing that grabbed my attention was the option of having a console so portable and versatile, that you can use it in a huge show of 30 thousand people, or just as easily, mount it in your hotel room and be able to work. Its setup is seamlessly simple. But above all that, the sound quality is just INCREDIBLE.” 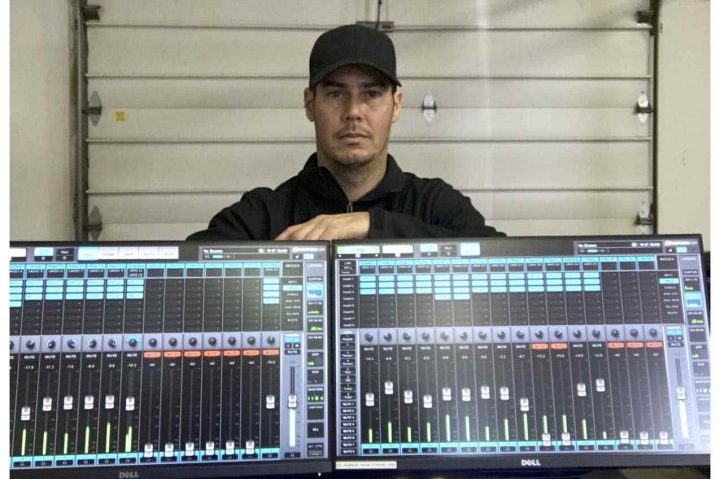 On his setup, he adds, “I use a Windows 10 professional computer, 16GB RAM, 512GB SSD hard drives, two touch screen monitors and Waves’ Icon Platformcontrollers for faders. For DSP, I use a SoundGrid Extreme Server and for IOs, the DiGiGrid IOX and DiGiGrid IOC units. Using a MacBook Pro with Waves Tracks Live, I can record the show and do a virtual soundcheck with the Tracks Live playback.”

On using the LV1, Irizarry remarks, “Apart from how easy it is to set up and how comfortable it is, an especially crucial benefit in using the LV1 is the accessibility of Waves plugins, which means that I can use the same plugin presets used in the album mix. This enables me to have the show sound as close as possible to the mix of Residente’s CD. Also, it is a no-brainer when it comes to doing a virtual soundcheck before the show.”

Irizarry adds, about using Waves plugins, “One of my go-to plugins is the Waves Torque, which is spectacular! I use it mainly on the snare drum. It is so easy to use. It literally lets you tune the snare from a song in low tuning – to a song with a higher tuning. Another one is the Waves F6 Floating-Band Dynamic EQ, which I use on the main voice channel. It is a life saver. René’s (René Juan Pérez Joglar, AKA Residente) vocals are extremely dynamic. The way he holds the microphone, moves away, gets closer, covers it with his hands … Thanks to the F6, I can keep the voice as faithful to what it is on the CD. An additional must-have plugin is the Waves PSE (Primary Source Expander), which I use on several channels such as guitars, vocals, and some percussion channels. It is an Expander that helps me control the noise on the stage and the noise of the audience’s screams. It makes me feel like I have an assistant that is focused on controlling the faders of the vocal channels. It is one of the most powerful tools for live sound.”

He continues, “There is a lot going on musically in this production. There are songs that range from calm to very aggressive. Using Waves’ compressors, limiters and vintage gear emulations, we have managed to reach that ‘analog’ color of the original recordings. Also, with a live drum set and very busy percussion, Residente’s rhythm section tends to be quite massive. It is a challenge to maintain a controlled and clean mix when you have more than 30 microphones that are open all the time, when 22 of those microphones are on the drum kit and percussion. So, on the drum kit, I use Waves CLA Classic Compressors and the SSL E- Channel. On percussion, I use Waves CLA-2A Compressor/Limiter, the SSL E- Channel and PSE. In addition, the piano in this show is quite prominent and it needs to cut through with a full body and distinct presence. ResIdente’s pianist uses a Nord Stage 2 EX 88, which I process with the Waves CLA-2A, the SSL-G Equalizer and the C4 Multiband Compressor. The latter helps me to handle all the piano channels’ frequencies, creating an organic and more natural sound. It’s a show where there are a lot of dynamics, and the most important challenge is making sure that the vocal does not get lost in the mix. Using the LV1 and Waves plugins gives me the confidence that I am in total control of the sound.”

Irizarry remarks, “Basically, the Waves eMotion LV1 console has everything you need at FOH, with outstanding sound quality. It’s so versatile – you can run it in your living room today, then use it at FOH tomorrow.”