You can always count on Queen to light up the stage with its legacy of dynamic music created by rock royalty.  The North American leg of the band’s current world tour got some additional wattage from a large complement of Claypaky Scenius Unico, Mythos and Sharpy Wash fixtures.  Upstaging, Inc. supplied the lights for the tour. 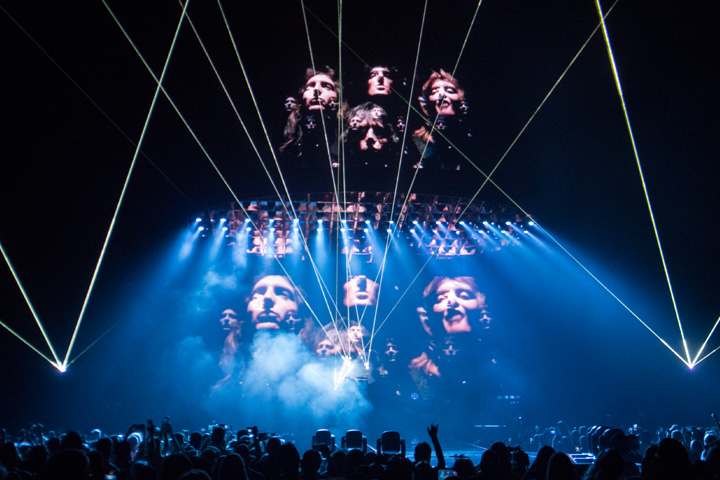 The Queen + Adam Lambert Tour 2017-2018 will play a total of 62 dates worldwide.  The North American leg kicked off in Arizona in June and wrapped in Texas in August.  The tour will hit continental Europe, the UK and Ireland in the fall and Oceania next year.  The successful partnering of active Queen members Brian May and Roger Taylor with Adam Lambert began in 2011 MTV awards, followed in 2012 by a handful of European/UK dates and then their 2014-15 world tour and a European summer tour last year.

For their latest outing lighting designer Rob Sinclair created the kind of big look that Queen fans have come to expect from the band.  “It’s a pretty big show; Queen shows kind of need to be,” he says.  “We wanted to do something with a large kinetic overhead centerpiece. 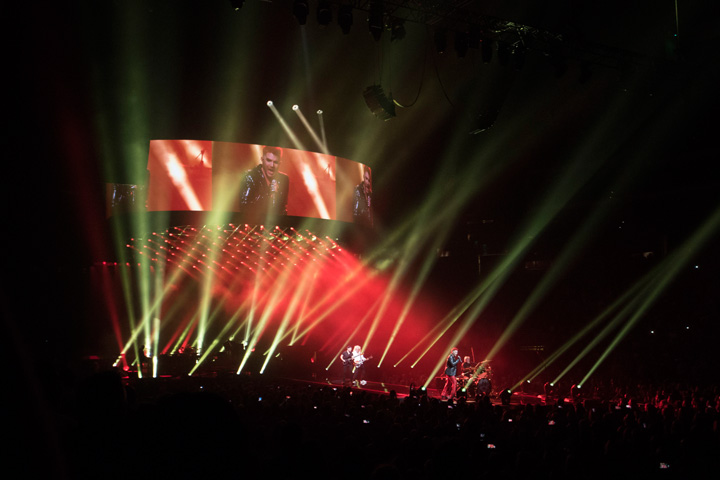 “The real challenge of lighting Queen + Adam Lambert is always having a bigger look up your sleeve.  The songs start huge and get bigger.  There always needs to be more of something available.”

Sinclair mounted 92 Sharpy Washes in a custom central “halo,” which he describes as “a bespoke 9-ton kinetic piece made by Tait, which moved to a variety of positions.  We wanted something that could read as a single huge lighting instrument, and to populate it I needed small, bright and affordable color-mixing arc lights.  Sharpy Washes were my only real choice.” He also placed 76 Mythos on the floor and in a grid behind the blow-through rear screen to create a wall of light.

Additionally, 56 Scenius Unico fixtures were used as automated followspots integrated into the BlackTrax system.  “I chose Unicos to be my automated keylights because I needed something bright with an even field, good colors and no green in the source,” Sinclair explains.  “They exceeded my expectations.” In fact, all of the Claypaky fixtures “worked great,” he reports.

A.C.T Lighting is the exclusive distributor of Claypaky products in North America.

Francesco Romagnoli, Claypaky Area Manager for North and Latin America, added, “Queen is an iconic band and Adam Lambert is a great artist.  It’s great to see these artists partnered and it’s an honor that our lights are so prevalent on the tour.”