Czech pop rock band Kryštof celebrated their 25 year anniversary in style with a sold out arena tour and a massive two night concert at the Stadion Evžena Rošického in Prague, where they played two tumultuous shows to over 70,000 fans marking this incredible career achievement. They also released a special new album this year – ‘25’ – to coincide with an extensive live performance schedule.

Full production for the tour and stadium shows was supplied by ZL Production who have a long association with Kryštof. The band’s lighting designer Jiří Rouček is also a long serving crew member, and since 2010 he has also been working as head of lighting for ZL Production based in Plzen and Prague. Production for the show included around 100 Robe moving lights, which played a crucial part in the proceedings.

The stadium shows were a huge deal for everyone involved, so Jiri wanted to make sure the lighting looked large and spectacular to match everyone’s expectations. There was no question as to his choice of moving light brand – and that was not just through being patriotic!

A substantial amount of LED screen was involved in the stage design – both on and around the stage itself and across the PA wings each side widen out the overall picture and ensure that all in the venue, even those at the very back, could get a good view of the action.

The strong video presence and the epic wide-stage look, stretching over 60 metres, was originated by Kryštof lead singer Richard Krajčo and film director Karin Babinska who is also his wife. They worked closely with ZL Production’s technical director David Šteiniger, and the resulting stage was arguably the biggest to date built for a Czech band on their home territory!

It was essential that lighting was powerful and potent enough to keep a balance with the video and so Jiri specified 18 x Robe BMFL Spots, 4 x BMFL Blades, 24 x Spiider LED wash beams, 24 x Pointes, 12 x LEDWash 600s and 12 x ColorSpot 700E ATs to ensure he delivered the results! 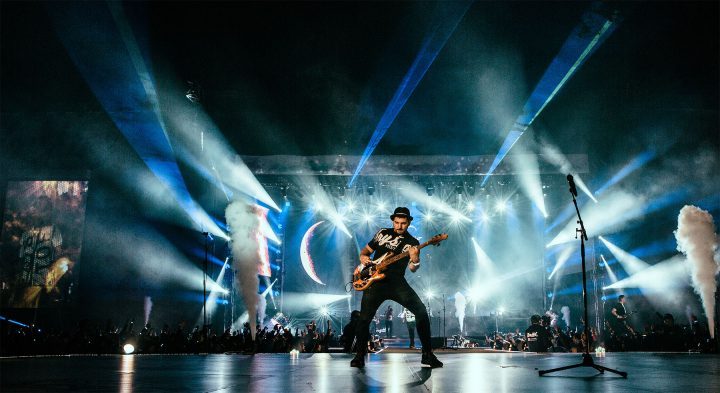 Twelve of the 18 x BMFL Spots were positioned upstage on over-stage trusses with another six on the floor behind the band, while the BMFL Blades and ColorWash 700E ATs were all also rigged on the front truss. The ColorWash 700s provided the basic stage washes.

The Spiiders and the Pointes were on six vertical towers each side of the five onstage sections of LED screen, and these provided all the main effects looks – an infinite variety of colours, shapes and effects that really energised the performance space.

The Spiiders were run in Mode 4 for full pixel mapping potential which created another complete layer of looks.

Jiri utilized several pre-prepared maps to assist the process and the final compositions, and he made the most of the flower effect which was much appreciated. “Spiiders are very easy to use just as a basic wash, however the 4 – 50 zoom greatly enhances their versatility and really adds so much value,” he commented.

He loves the BMFL Spots! “It is one of the best performing spot moving lights available today. The output of the 1700W lamp is fantastic for large events like this. All the BMFL features are fast and allow a lot of creativity through different combinations of colour, gobo, iris and other FX. It is an amazing fixture!”

He also used two BMFL Spots on FOH towers running in follow spot mode, complete with the LightMaster control kits – externally mounted programmable followspot handles with control panel and two individual faders – to enhance this specific functionality for the operators. This also allows some parameter control like dimmer, colour and iris to be retained by the console operator.

Although he had initial reservations, these vanished as soon as Jiri saw the BMFLs working in this way. After the gig, he stated “The BMFL makes an excellent follow spot and now the crew are saying they prefer them to using a standard follow spot!” 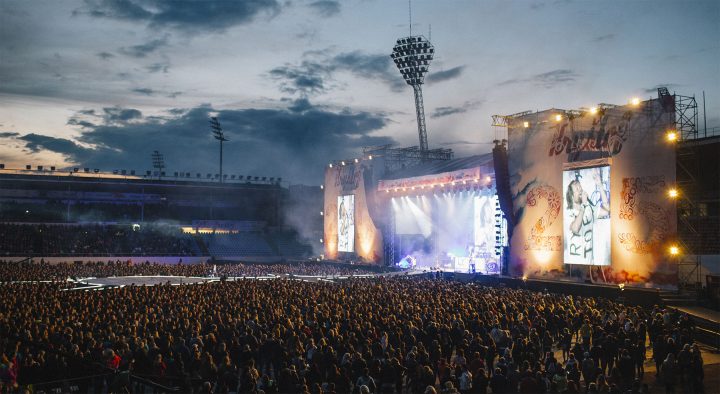 The BMFL Blades, with their smooth and elegant framing functionality were positioned on the front trusses for accurately highlighting the individual musicians.

The show was a massive success for Kryštof, and the whole technical presentation as part of the experience received lots of positive comments in the press and across social media.

ZL Productions’ owner and founder Jan Lippert says, “When we took on delivery of the full technical production of these shows we knew it was an ambitious project, and our goal was to deliver a truly world class show for the band and their many fans … something they would remember for a long time!”

ZL Production was founded in 2005 and has built itself on providing a ‘boutique’ style service focussed on quality over quantity, on presenting innovative and smart solutions and on forging lasting relationships with clients in all sectors across the Czech Republic.

They currently have around 100 Robe fixtures in the rental inventory and are very proud to be investing in a Czech manufacturer that has become one of the world leading brands.

The first Robe purchase was eight LEDWash 600s back in 2010 recalls Jan … since when they have not looked back! “Going the Robe way was our BEST choice!”

From a rental and production company perspective, investing in Robe has brought the essentials of “Quality, functionality, efficiency and great performance … and with these technologies we can literally amaze our clients,” he says.

He elucidates that they share the same core values as Robe and are also an independently owned and run company. When they initially decided to invest in Robe, many of the other Czech rental operations were already on-board with competitor brands, a situation which is right now changing rapidly and dramatically as Robe’s domestic sales soar.

Jiri is equally enthusiastic about Robe, and in fact … Jan adds with a smile that since 2013 with each major new Robe launch, Jiri will come to him and say that the lighting department “unconditionally needs this latest technology!”