This year we had the pleasure of attending the Pistoia Blues Festival, a festival which despite the name (based on the genre from which everything started) has in the last few years gained a clear rock connotation. The stage on that day first featured a performance from The Cult (you can read an interview with their FOH here), with The Editors as headliners.

A very pleasant afternoon was spent in the Piazza del Duomo, filled with interviews and talks with some old friends. In the distance a small, compact case, with an unmistakable sign reading “The Editors FoH” attracted my attention. “Where is the band’s mixer?” I wondered, assuming that that was just the case for the band’s outboard equipment. Soon enough, Adam Pendse, the band’s sound engineer, came along to open the case, and finally the mystery is revealed.

Inside is not the ordinary “compact” console that you often find at these provincial festivals, but instead a console with no physical pots or faders at all. To simply describe the revolutionary eMotion LV1 in this way is a bit disrespectful, but these are words that clearly explain the most immediate impression of this “console”. Two angled touch-screens give control over Waves’ trusted and powerful SoundGrid technology. It was the first time that I had seen this console utilised within a real-world application, and even though The Cult’s performance was about to begin, I couldn’t pass up the opportunity to talk with Adam. Our chat transpired to provide a valuable insight into this digital and “non-tactile” way of working, although Adam did admit that a “little bit of analogue” is never too far away. We’ll delve straight into the interview, but those who want a little more information about the product can refer to the manufacturer’s site here. 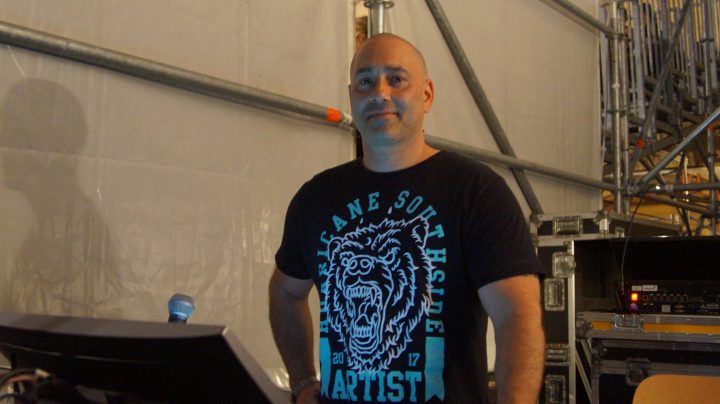 Adam Pendse, FoH for The Editors

LightSoundJournal: The first question I’d like to ask you is about your choice of a not-so-common system. Can you explain to us why you have entrusted yourself to Waves’ eMotion mixer?

Adam Pendse: When I first became aware of the Waves mixer I knew it was something that I would eventually end up using. I’ve been a bit of a computer nerd for many moons, and I’ve been incorporating standard pc/mac computers into my live mix workflow for many many years. Kudos to Waves for being the first company to break apart the closed shop paradigm of modern live digital consoles and open up the possibilities of a “mix and match” system. The option of running a redundant LV1 server is essentially more of a failsafe than most standard consoles can offer right now, and it’s still a young product. There are of course troubleshooting pros and cons with this approach so one has to do the appropriate research and testing before jumping in to work out if its going to suit you.

LightSoundJournal: Does the absence of physical faders have an effect on the speed of your workflow or ergonomics, for example when there is a need for speedy intervention? 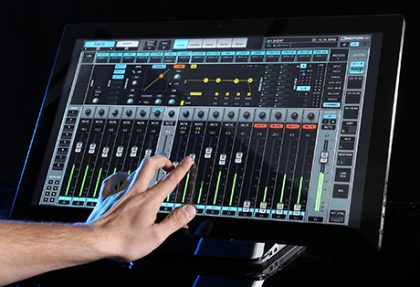 The software eMotion LV1 on a touch screen

Adam Pendse: No, not for me. Of course the mixing experience is very different with a touch screen, but the net result for me has been the same. There are user assignable hot keys and mute groups, plus custom fader banks so everything is within easy reach. I know many engineers have a problem with the lack of faders, and its not to everyone’s taste, but USB fader banks can always be added.

LightSoundJournal: Do you consider that it will be a perfectly “normal” concept to mix on a touch screen in the future? A transition like that of the passage from analogue to digital?

Adam Pendse: Yes. You see larger and larger touch screens appearing on top line consoles and more and more of them. In 10 years it won’t be a question as the next generation of engineers come through. 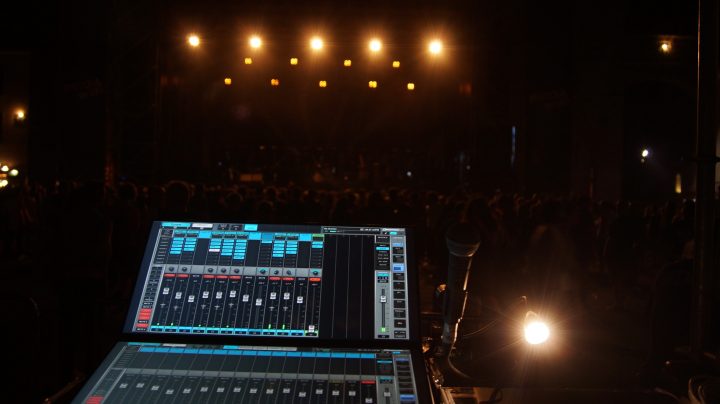 The eMotion during the show

LightSoundJournal: When you work in half-production mode (working without a touring PA system), what research do you carry out into the resident systems? Is there any particular type of system that you need in order to achieve the sound that you/the touring engineer are looking for?

Adam Pendse: Initially it’s a simple case of system vs coverage and if a good balance for the space is achievable with what is on offer. The top 5 or so PA systems all sound fantastic provided setup is correct. As most touring engineers will have experienced the same PA can sound radically different when setup by different system techs.

LightSoundJournal: In Pistoia we experienced a well-defined mix, very clean in the mid-low frequencies. How do you work to achieve this?

Adam Pendse: Despite the computer based console I’m still a massive fan of analogue processing. Especially on the master bus. I have a Maag EQ on the mixbus and although it has fixed frequency bands its incredibly musical sounding. I have a Smart C2 compressor with the LF sidechain enabled and I would attribute this combination of eq and compression to the overall definition and warmth in the mix.

LightSoundJournal: Talking about dynamics and compression in general, what are your approaches here? Do you apply any particular techniques?

Adam Pendse: I’m a big fan of frequency dependent dynamic processing to make space in the mix. Waves’ classic C6 is one of the most useful tools out there which I wouldn’t want to be without.

LightSoundJournal: Are you using any special or particular microphones or techniques, or is this all pretty standard?

Adam Pendse: Its all pretty standard actually. The band own most of their mics so we use what we have.

LightSoundJournal: Guitars play an important role in the production because there are many harmonic and melodic strings, often with delay. How do you keep the guitar sounds as sharp and as focussed as possible? 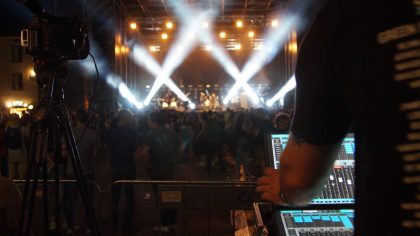 Adam Pendse: They sound really good at source which is 90% of the battle. We have double amps/combos/cabs for Tom and Justin which adds a great texture to their respective tones. The only thing I use is some frequency dependent compression to tame certain areas that tend to build up when it’s a full on wall of sound.

LightSoundJournal: When the show starts, what do you focus on first as the first step to getting everything mixed correctly as quickly as possible?

Adam Pendse: Having a show file dialled in obviously gets you off to a good start and should be a good indicator of whether work needs doing within the system or the mix.