As we mentioned in our Audio Report yesterday, Lighting was certainly the star at this year’s PLASA show. This is something that was clearly reflected by the nominations for this year’s Innovation Awards, which were particularly lighting-heavy. From individual fixtures to complete systems, here are our lighting highlight’s from PLASA Show 2017.

Alright, it’s not a COMPLETELY new concept from Robe, but any product that strongly builds on arguably one of the most influential products to be released to the market in the last few years is certainly something to sit up and pay attention to. Robe always finds new and exciting ways of showcasing their products at trade fairs around the world, and this year’s booth at PLASA was no exception with what could only be described as a dancing glitter-ball. 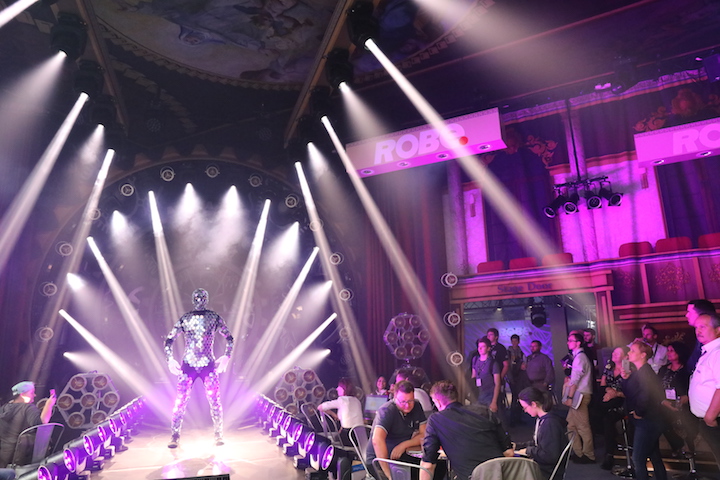 The MegaPointe sees its foundations grounded on the successful Pointe, a fixture that’s been praised by the industry for its “all-in-one” capabilities since its release in 2013. This was a fixture already capable of delivering sharp beams to rich colour washes, and now with a 470W OSRAM lamp combined with an even more advanced optical system, the MegaPointe takes this go-to fixture to a whole new level. Adjustable from a tight 1.8 degree to a wide 40 degree beam, a combination of static and rotating gobos within the new effects engine are capable of producing precision in-air effects or imagery with a sharp, high-contrast, flat field. What’s more, all of this comes packed in a fixture that’s only 22kg in weight.

There was a lot of ambient light in the hall at PLASA, but this didn’t stop the beams of the MegaPointe cutting through the air with precision and clarity. This level of brightness and focussed light makes the fixture even further suited to larger outdoor concerts, for example for bringing an exciting and dynamic light-show to even earlier in an evening stadium performance.

Announced at Prolight & Sound Frankfurt back in April, the Axcor Profile 900 is Claypaky’s first spotlight to utilise an LED light source. Its white LED light engine is capable of producing a total power of about 900 watts and luminous flux of 46,000 lumen (24,000 lumen output). This is then coupled with an advanced system of dichroic colour filters, and micro-mechanics added to provide an intricate beam-shaping system. 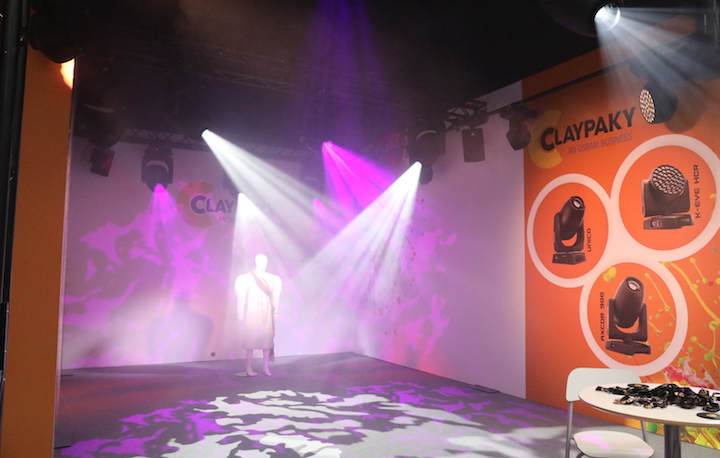 Alongside the Axcor Profile 900, we have the recently announced K-EYE HCR fixtures – two wash lights featuring LED light sources consisting of a module with six chips, each for a different colour. The fixtures pride themselves on delivering a wide colour range with optimum colour spectrum coverage. This approach to accurate colour re-production is something that was reflected by the PLASA Innovation Awards, which praised the company’s approach to colour rendering at chip level, rather than simply manipulating existing light sources. To achieve this, Claypaky has added colour chips beyond the traditional RGB, with the addition of amber, cyan and lime. 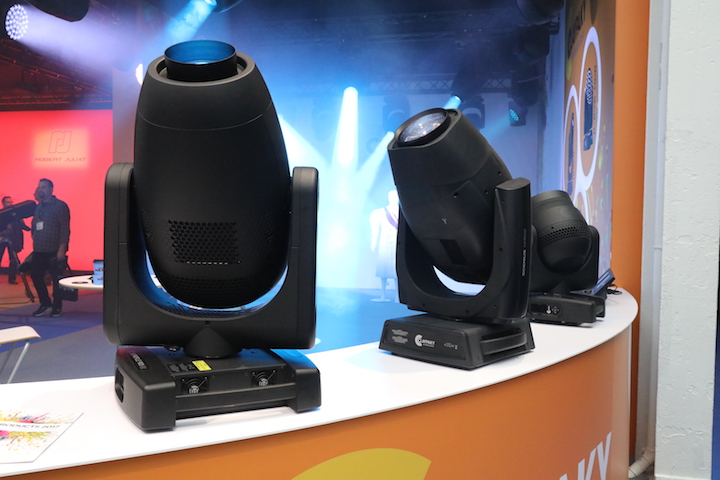 Completing the trio of recently announced fixtures is the Scenius Unico, the latest addition to the Scenius family. A multifunctional luminaire, the Scenius Unico combines spot, beam and wash features into one fixture, with a zoom ranging from 5 – 55 degrees. A 1400W Osram lamp provides a 6500K output with exceptionally high CRI. The advanced framing system makes Scenius Unico capable of producing sophisticated and intricate beam shapes, especially when combined with the animation wheel and rotating gobos, as well as a rotating prism.

The LED strobe market is one that has seen fierce competition over the past couple of years, with major brands including Claypaky, Robe and Martin all bringing their own offerings to the table. GLP’s JDC1 is the latest major contender to hit the market, and one which has received acclaim from within the high-profile events on which it has recently been used. Replicating the single tube element found in the centre of traditional lamp-based strobes is a row of 216 white LEDs, delivering incredibly bright white light. This is then surrounded by a full-face of 1320 RGB LEDs, which can be divided into six individually controllable sections to provide diverse pixel mapping capabilities. As well as this, the white LEDs in the centre tube of the fixture can be divided into 12 individually addressable sections, enabling the programming of chases and and motion effects. This combined with the design of the unit, which allows for fixtures to be placed side-by-side with close proximity, allows for eye-catching designs to be programmed across a line-up of units. The JDC1 then really goes on to set itself apart from the competition, with a 16-bit 180 degree tilt range, allowing for the light to be placed in multiple positions for extended design possibilities. When used with the units ability to run chase sequences, it gives designers the ability to create intricate wave effects, with powerful and consistent light flooding both the stage and audience.

Another brand to present their first LED Spotlight to the market is Ayrton, with GHIBLI – a compact fixture delivering 23,000 lumens with a 7:1 zoom providing a beam angle from 8.5 to 5 degrees. GHIBLI also features CMY colour mixing, variable CTO, and a complete effect section including two gobo wheels, a prism, an animation wheel, two frosts, and a rotating framing system. Ayrton pride themselves on making all of these features available, without compromise, at an affordable price point. One of the main interesting factors of GHIBLI is the lens technology, in that the light engine module moves forwards and backwards within the fixture, rather than the lens itself, improving the optical output of the fixture, and ensuring that beam edges remain crisp whenever required. 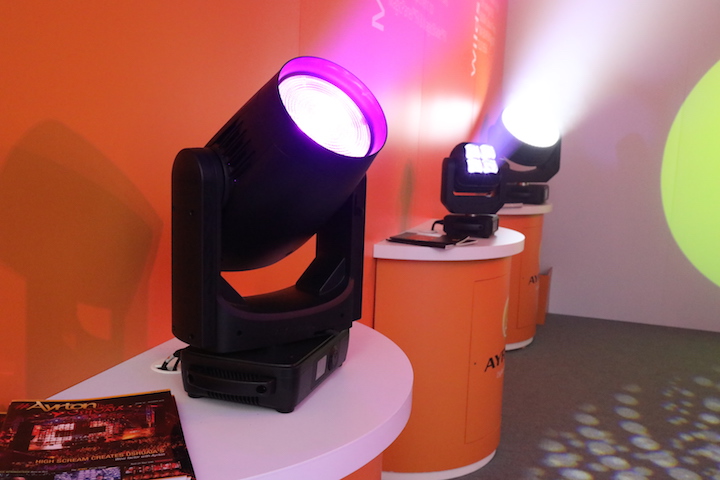 Also from Ayrton we have an addition to the company’s FX-Zoom range, the MiniPanel-FX. This fixture could be considered to be the little brother of the popular MagicPanel-FX and MagicBlade-FX, and features four square lenses in a 2 x 2 configuration, capable of producing both beam and wash output with a zoom range of 3.6 to 53 degrees. This combined with continuous pan and tilt rotation makes it a great little fixture for creative applications and eye-candy effects.

Although we mostly tend to focus on individual fixtures from manufacturers, we are on occasion struck by a complete solution that is both intuitive and creative. Astera LED Technology focus on wireless LED solutions that give users a maximum return on investment, by designing products with multiple applications and usage possibilities. They design and build their systems from start to finish – from the the LED Par right back through to the wireless transmitter, and even the control application. 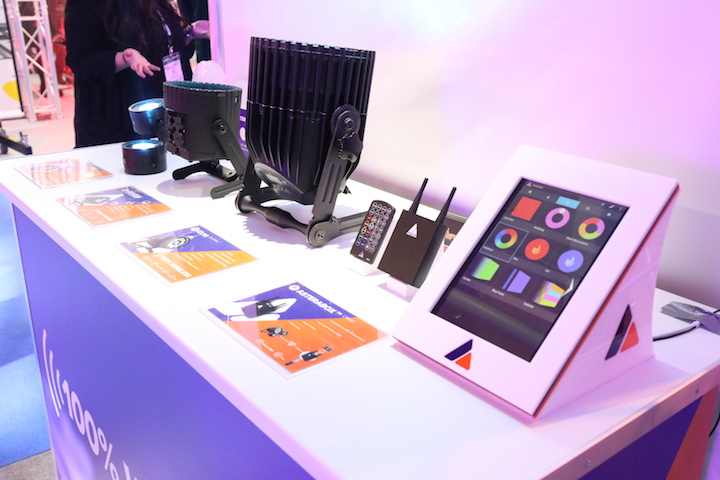 The star product, and a nomination for PLASA’s Innovation Awards, was the AX5 TriplePAR. The fixture can be used as both a wired and wireless PAR, for both standard usage and uplighting, and can operate for up to 20 hours on a single charge. The unit features an easy-to-modify bracket, which can be adjusted and removed without the need for any tools using a quick latch system. The really intuitive features come as part of the whole system, for example the fixture has a sensor in it which sets off an alarm if the fixture is moved whilst connected to a wireless system – pretty useful for those larger, more boisterous events! There’s also a really user-friendly and powerful GUI behind the control software, which allows the user to control the colour of the LED fixture using a huge bank of presets, including a library of LEE colour filter presets. This ensures that whichever features within the range are used, a consistent shade of colour can be produced from one model to the next.

Although Robert Juliat debuted their new followspot offerings at Prolight & Sound in Frankfurt, PLASA 2017 was the opportunity for UK users to get their hands on the company’s latest releases, including the PLASA Innovation Award nominated Oz. 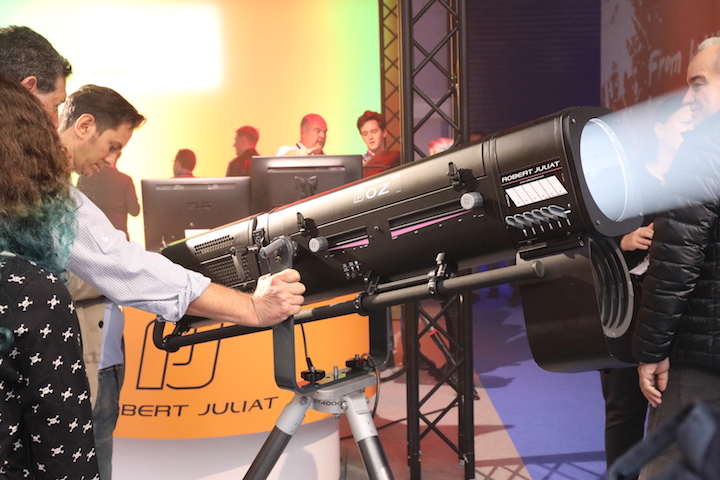 PLASA 2017 marked the global tradeshow debut for the Ion Xe lighting consoles from ETC, as well as the upcoming ColorSource Cyc Fixture. Both the Ion Xe and Ion Xe 20 consoles have small and compact footprints, and allow smaller venues to make use of the powerful programming capabilities of the Eos range. These consoles can be expanded with new Eos fader wings, which add either 20 or 40 faders using easy to connect USB modules. The consoles themselves feature main playback controls, fader controls, level and rate wheels and four rotary parameter encoders. ColorSource Cyc will be releases later this year, and provides a powerful and bright light in a compact and affordable package. The fixture is designed to produce smooth and consistent washes of light on a cyclorama, backcloth or wall, and is the first ColorSource fixture to feature 5 LED colours (Red, Green, Blue, Lime and Indigo). This gives users the ability to recreate a huge range of colours, and can be used within theatres to replace traditional gel-based fixtures.

There was one main clear focus on the Green Hippo stand at this year’s PLASA Show, and this was Montane +, their dedicated graphics processor for 3D Mapping and real-time generative content.

This 4U rack unit has been designed to operate in collaboration with Notch, a workflow package for the production of video content, live visual effects, VR and interactive content. With 4K video support providing uncompressed playback through the system, and a free Notch playback license included with the Montane +, this really is a package capable of delivering truly immersive real-time motion graphics and video content. This was demonstrated on Green Hippo’s stand with the use of a large LED wall, displaying a live and complex realisation of live video footage being fed into the system using Montane + and Notch processing.