An extraordinary Sci-Fi Portal on the DWR Distribution stand caused more than a stir at the 2017 Mediatech Africa expo held at the Ticket Pro Dome in Johannesburg, where DWR also received a platinum award for their stand. The project was a giant leap and learning curve for DWR’s Dylan Jones who mapped content, supplied by Provisual Media, onto the portal using Hippotizer Media Servers. Hippotizer was also used in DWR’s newly renovated spaceship themed demo room, which formed part of the Mediatech attraction. 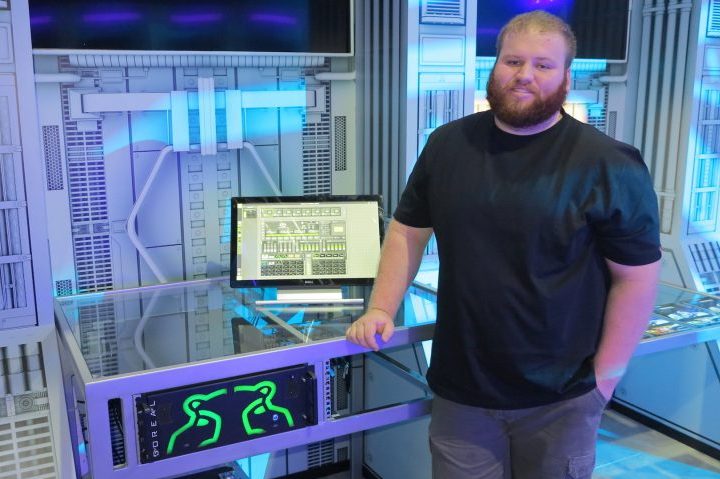 DWR’s initial concept was to create a small bus station at the expo where show goers could hop on board a bus and be transported to the DWR offices some six minutes away. As ideas darted back and forth around the boardroom table, it was DWR’s Gareth Chamber who announced, “Let’s have a Stargate portal,” the articulated words turning all former planning onto its head! The portal, that would end up taking close to 1400 ‘explorers’ to a galaxy far, far way, was born!  The show stopper saw guests at Mediatech enter through the portal’s water curtain, supplied by LazerX, and then walk along an exceptionally bright and blinding lit tunnel before embarking on a journey to DWR where the experience continued!

“This was honestly a fun project,” said the talented Mauritz Jacobs from Dream Sets who designed the set for both the portal and the spaceship themed demo room at DWR. “Straight after our initial meeting, I jumped onto the design. I knew exactly what I wanted and literally went back to the office and just drew… and this is what came out of it. I was unbelievably excited to be part of such a huge project with such amazing people and was blown away by the end result. A huge thank you to DWR’s Duncan Riley, Gareth Chambers and Dylan Jones for all your assistance and well done for coming up with this amazing concept.”

The next stop was to source content, and DWR turned to David O’Donnell from Provisual Media. “I was really excited about the brief and DWR’s ideas and concepts,” David commented. “We researched various Sci-Fi designs and drew inspiration from existing material. ‘Stargate’ was a big influence as we were fascinated by the structural design and fluid portal concept.” 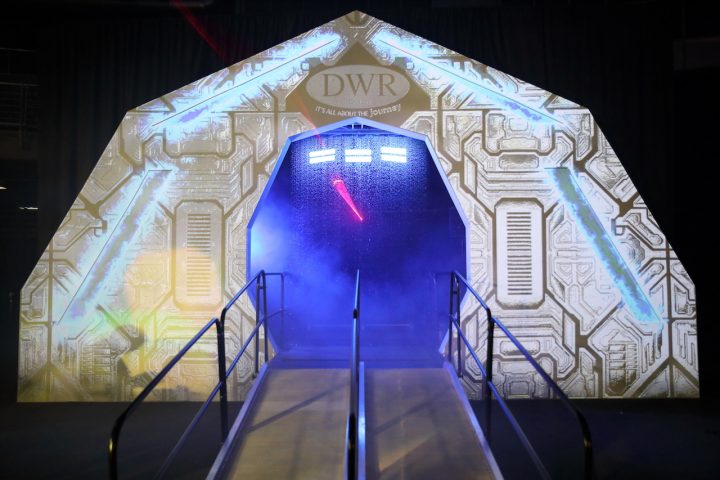 Provisual started off by looking at the mapping surface and finding ways to make it come to life. “We were lucky enough to have a talented team of artists who designed the elements for the portal and built it in 3D, which gave us the freedom to have control over all the elements,” David explained. “Once we had all the elements in place and the overall look of the portal, we came up with different ways to animate the various components and to breathe life onto the static surface. Our aim was to take the surface and transform it into a gateway that would attract the audience and send them on a journey.”

David and his team hit the nail on the head, and DWR fell in love with the very first artistic proposal presented to them.

With the set and content in-hand, it was up to the Green Hippo to set the plan into motion! Dylan Jones joined DWR in February 2017 and is the DWR Green Hippo Product Manager. “I am very new to Hippotizer and this was a brand-new experience for me,” said Dylan. “I wasn’t intimidated because it really is easy to use and I’m not just saying that! That said, I like challenges and I have to mention Christopher Bolton, a big Hippotizer user, who helped me. Chris also used the Hippotizer Boreal at his Black Box stand at Mediatech.”

With the content designed especially for the set and in the same shape as the set, all that was needed was to project onto the set and then warp (taking a point and stretching it or pulling it) onto the edges to make the content fit exactly onto the space without spilling over the sides.

“The only calculations required was to know how far the projector had to be from the set so that it was wide enough to fill it,” explained Dylan. “We used SHAPE, the 3D projection mapping software, to establish where the projector had to be positioned. The mapping itself was done using the Warp Manager in Hippotizer.” MGG Productions supplied the Christie Boxer 4K30 projectors utilized and 4K content ran from Karst to the output. 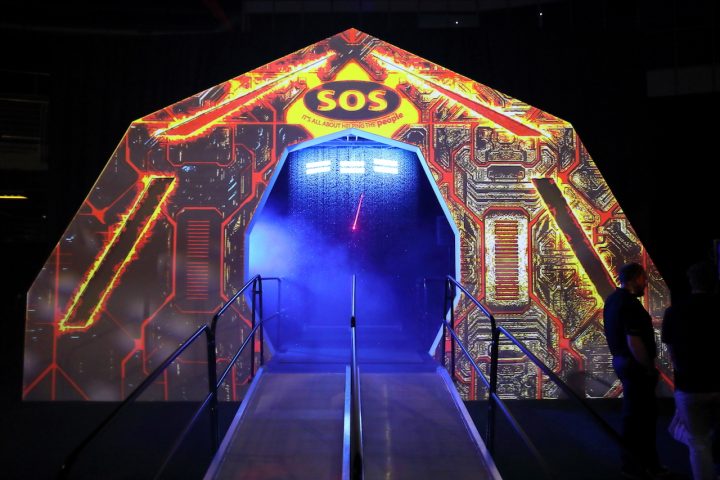 “The secret is to have good content,” said Dylan. “Once we had mapped the portal, we got bored with the custom content and we wanted to run everything through it so we made a mask. You draw a border around the set so that projection is only within that space. After we did that, we could play anything through the content and it didn’t spill over. That was very cool. We were really just playing with all the functions for projection mapping because it was our first time to experiment with it.”

The portal was controlled with MA’s dot 2. Artnet was used to control the Karst Media Server. “We made cues to the different pieces of content, which included the ‘Charge Up/ build up’ of the portal, which then opened, lifting the water curtain. That loop continued until all the guests had walked through the portal, and then a separate “Close Down’ sequence was used thereafter. In addition, media ran where different boxes on the portal opened up to reveal various DWR supplier logos.”

DWR’s Nick Barnes from the Durban branch was very involved with control of the portal and he ran the show every day. Using dot 2 Nick did the lighting programming and audio triggers for the tunnel. The audio was taken out of the cast media server – there are XRL outputs that allow you to take the audio from the video that’s embedded.

Hippotizer was also used in the DWR’s demo room.  “The demo room was more complicated,” said Dylan. “We had two Hippotizer Boreal servers which ran seven 55 inch plasmas. Content was run over all seven plasmas seamlessly. Hippotizer in the demo room was controlled by Jannie de Jager from DWR over Arnet by the grandMA2, while Bruce Riley helped a lot with trouble shooting and kept everyone calm!”

“Mediatech has been an amazing learning curve,” ended Dylan. “I feel much more confident now, and feel the experience has taken my understanding to another level.”