“We were all pretty positive that that would never happen so it’s still sort of blowing our minds.”

This was the response from British-American musician and songwriter Saul Hudson, better know as Slash, when recently asked for his thought’s on Guns N’ Roses’ reunion tour, “Not in This Lifetime”. If the name wasn’t enough of a giveaway, this reuniting of arguably two of the biggest names in rock history, has both shocked and delighted millions of fans across the globe. When both Slash and founding member Axl Rose, along with long-running guitarist Duff McKagan announced back in 2016 that they would be sharing the stage once more for a worldwide tour, it was inevitable that a production of monumental status and calibre would follow. 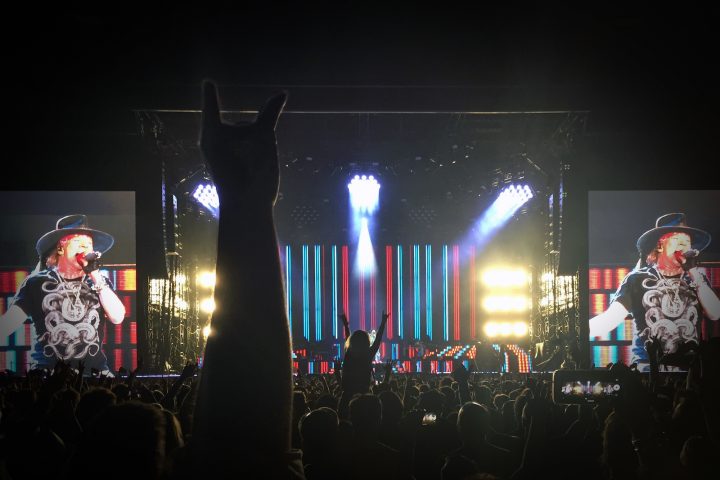 LightSoundJournal had the opportunity of attending one of the band’s only UK performances of the tour, at London’s ex-Olympic stadium, now simply titled London Stadium, in East London’s Queen Elizabeth Park. Two-nights would see the venue’s 66,000 strong capacity maxed out, with fans spanning multiple generations eager to witness an event that many thought would never again take place.

The centrepiece of the production’s lighting arsenal was undeniably German Light Products‘ flexible and multi-functional impression X4, of which the tour carries 133 fixtures. Arranged in seven clusters, or more appropriately named hexagonal “hives”, each cluster contained 19 fixtures, utilised to add a multitude of different looks to the performance, ranging from vivid colour washes, to intricate pixel-mapped beams. 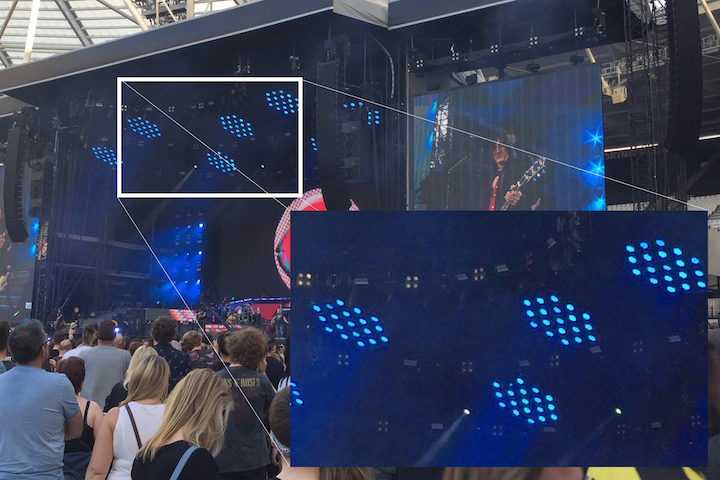 Whilst at the performance, we had the privilege of meeting with Lighting Director and Crew Cheif for the tour, Upstaging‘s Ron Schilling, who gave us a further insight into the production’s lighting design and implementation.

LightSoundJournal:  The opportunity of working with Guns N’ Roses is one that many Lighting Designers would give their right arm to have! How long have you been working with the band?

Ron Schilling: As you know, this is the second leg of the “Not in This Lifetime” tour. I’ve been working with the band since the beginning of the first leg, however in a different capacity, as Lighting Crew Chief. Towards the end of the first leg, we found out that the existing lighting operator for the tour would be leaving, meaning that the position was to be vacant for the second leg. I threw my name in the hat, and wouldn’t you know it, here I am!

LightSoundJournal: Run us through the basics of the German Light Products that you are using here on this performance of the tour.

Ron Schilling: The key element of the production’s lighting are the 133 impression X4 that are suspended above the stage in this unique “hive design”. We call these clusters our “pods”. The hexagonal shape of the impression X4 allows us to really nicely arrange these in a tight cluster, allowing the fixtures to provide not just fantastic output, but also to be used for complicated pixel-mapping effects, giving excellent eye-candy to they stage. As you have seen, the performance is incredibly visual-heavy, and we wanted something that would allow us to add something visual to the upper-elements of the stage, without distracting from the visual content taken care of by the LED screens to the rear and sides of the stage. Also on stage you will find 18 of GLP’s impression X4 Bar 10, which I really like because of their low profile. The individual pixel control gives the ability to create really nice chases, whether it be to add subtle movement to the stage or more fast-paced, rapid sequences for the more upbeat and high-energy sections of the performance. This combined with the additional ability to tilt the fixture makes them a really flexible little baton. 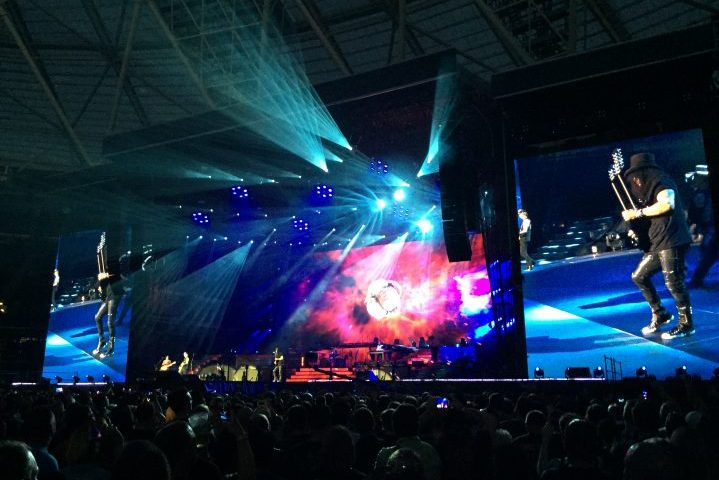 LightSoundJournal: What sets the impression X4 apart from other similar fixtures on the market?

Ron Schilling: For me, there are two main factors that make the choice of the impression X4 an obvious one. Firstly, their reliability. We’re moving from one leg of the tour to the next incredibly quickly, and using the same equipment throughout multiple legs of the tour. This means that reliability is a must, and we simply don’t have the time to replace or reset fixtures that are problematic. German Light Products have historically produced fixtures that are reliable, and the fixtures utilised for this production have certainly lived up to that expectation. The second main reason for having such a GLP-heavy rig is simply credited to the versatility of the units, in particular the impression X4. As I mentioned with the X4 Bar 10s, the ability to have not just individual section control, but a full and deep level of pixel control, gives an incredibly level of versatility to the looks that this fixture can create. The number of pixels is also fantastic, and this sets the unit apart from other competitors on the market, such as the Mac Aura. LightSoundJournal: What timeframes are you working to for Load-ins, and do you have many opportunities for technical rehearsals?

Ron Schilling: Back in June, when we started the tour, we were able to have two full technical rehearsals before the first show. In terms of per individual venues, we have been pretty lucky with having a full day for both Load in and Production, which enables us to ordinarily have a rehearsal in each venue. Not only does this allow us to discover any unseen restrictions or limitations in the specific venue but also gives the guys on stage an opportunity to get a feel for the performance space before heading on stage for the first performance.

LightSoundJournal: Tell us a little more about these pods. Are they consistent throughout the tour, even when you’re using the rig within the smaller venues?

Ron Schilling: Absolutely we use them in every venue; they are the centrepiece of the production’s lighting design. As for the pod’s themselves, they have been specifically designed and manufactured for this production, so that we can cluster the fixtures really nice and close together, making the best use of their hexagonal design. Regardless of the size of the venue, I think we have managed to factor them into every single step of the tour. We might have needed to adjust other elements of the rig slightly to accommodate for this, but we always ensure that this key central element of the design is there. The key concept behind the close placement of the individual GLP impression X4 within the pods is the idea of each pod forming one super-sized moving head. This singular unit can then be used to either produce one singular wash of high-powered light, or individual elements within the pod can be controlled separately to produce complex patterns of light. We utilised the fixtures existing macro features to to achieve these effects, and the fixtures are also sub-divided into different sections within the pods to achieve an even more dynamic level of control. LightSoundJournal: Have the roles of Lighting Designer and Lighting Operator crossed-over at all within the development and implementation of the tour, or are they two very separate and defined roles?

Ron Schilling: I would say separate for the most part, especially considering that the lighting operator has changed from the first leg of the tour to the second. Lighting Designer for the tour is Phil Ealy, who has been working with Guns N’ Roses since their Use Your Illusion tour in the early 90s. Of course, the technology has changed dramatically in this time, but Phil has certainly ensured that his designs are constantly evolving, and the current design is certainly one that compliments the performance seamlessly.

LightSoundJournal: Do you have much flexibility for improvisation during the performances, or is the production very programming heavy?

Ron Schilling: Most of the programming is very structured for the production, especially due to it’s necessity to compliment the video design of the show. Programming for the tour was completed by Rob Koenig, who as I mentioned before has followed Phil’s design; in order to compliment the pace of the performance and to work alongside the video elements of the production. For example, when the group performs Black Hole Sun, there are a lot of purple elements to the video design, and the lighting has been designed to work with this accordingly. That said, cues can often change depending on the location of the band members on stage. As I’m sure you noticed whilst watching the show, all of the band members move around a lot on stage, sometimes unbelievably so! This high level of energy on stage means that you can’t always accurately predict their positions, so inevitably cues do change around this. We also have a higher level of flexibility when operating to allow for interaction with the audience. It might be that the crowd are particularly strong with getting involved in a song, and we have a huge amount of crowd wash to enable us to really spur this on. 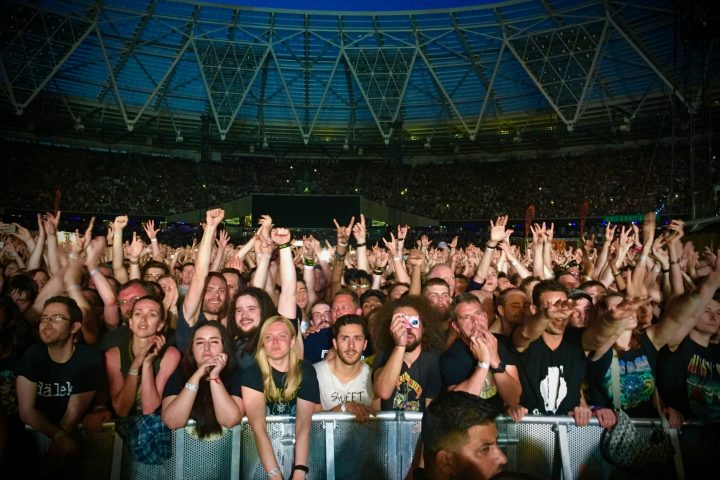 LightSoundJournal: What other lighting brands are you using alongside GLP, both as fixtures and for control?

Ron Schilling: We are using a wide variety of brands for the tour, and the total lighting design utilises 24 universes of DMX. Three are 33 of Robe’s BMFL Spot fixtures within the production, as well as 18 BMFL Wash/Beam and 10 Robe Pointes. We are also utilising the BMFL Wash/Beam as truss spots, to give us a really nice halo on the artists during particular songs. Not only does this look great on video, and therefore on the screens of the venue, but it really helps the artists to stand out in the larger venues on what is a pretty large stage. Other brands that are heavily used on stage include Martin Professional, of which we are using 60 Viper Air FX for aerial FX, 45 Martin LED Strobe for the high-octane numbers in the set, and an additional 9 Martin MAC III Air FX. We are also utilising 76 Elation Professional DTW LED Moles to produce the more traditional crowd blinder looks that are synonymous with stadium rock performances.

We are of course also using a decent number of Follow-spots for the tour, in this instance Six of Robert Juliat’s 4K Lancelot Spotlights. LightSoundJournal: Who is supplying the fixtures for the tour?

Ron Schilling: Upstaging is the universal lighting supplier for the tour, whilst the Lighting Vendor for the European leg of the tour is NEG Earth.