Tel Aviv based Light Architects Cochavi & Klein are known for their style and propensity for invention, so were naturally extremely impressed with Robe’s Spiider LED wash beams.

The leading designers seized the opportunity of the ‘Picnic Passover with Black Coffee’, a pumping electronic music event presented by The Tripping in Tel Aviv’s most famous urban oasis, Hayarkon Park, to utilise 48 x Spiiders and 24 x Robe Pointes on a circular trussing structure, forming a massive ‘sun’, which was winched above the crowds on a crane. 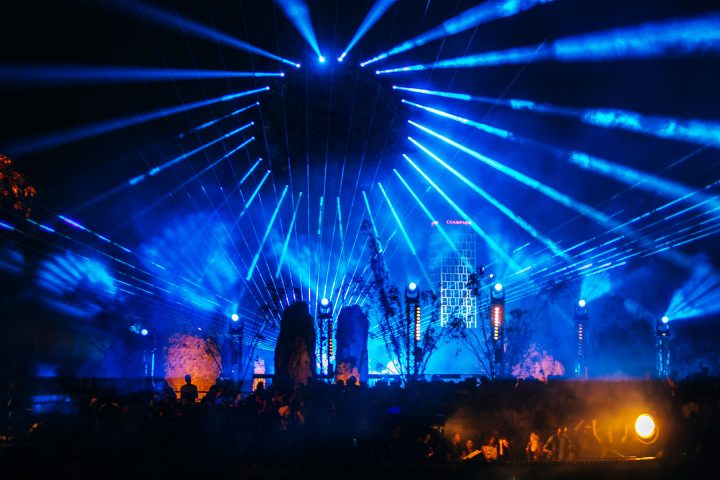 The sold-out event featured incendiary sets from award-winning, rising-star South African DJ and music producer Black Coffee, plus DJs Jenia Tersol & Benji. They, together with a hugely enthusiastic audience, enjoyed the unique setting of the park, which is known for its magical aura and ancient rocks brought from all over Israel, including yellow sand rocks from Mount Hermon … reportedly over 70 million years old!

These rocks provided a perfect backdrop to the show. The Tripping is also known for its staging concept of having a large VIP area around the DJ booth that promotes harmony, inclusion, peace … and encourages positive energy and connection between humanity and the environment.

Eran Klein explains that taking all this into consideration, together with Oren Heknin mastermind of The Tripping group, “we all dreamed about creating our own artificial sun that would rise behind the DJ booth and create a focal point for the party”.

Cochavi & Klein were one of the first design practices to use Spiiders when they arrived in Israel via distributors Danor at the end of 2016 after their launch a couple of months earlier. In fact they debuted the idea of a circular structure loaded with Spiiders at an indoor event at Tel Aviv’s Hangar 11 the end of the year, which was a huge success.

Since then, they had been wanting to make it larger and even more striking … and here was the perfect opportunity! 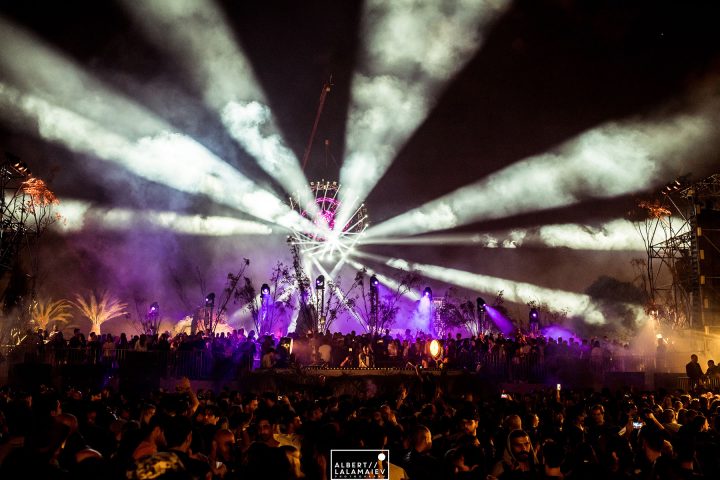 For obvious reasons, they needed lightweight fixtures and ones that provided the right dynamics and functionality to sustain the vibes and excitement so essential to dance music.

Three concentric circles of trussing at 8, 5 and 2 metre diameters were cross braced by 12 x 4 metre scaffolding poles to make the sun skeleton rigid. The Spiiders and Pointes were rigged on the front and back rails of the trussing circles in an alternating – pattern for balance.

Forty-eight blinders were also rigged on the structure between the Spiiders and Pointes to create a classic warm halogen feeling that contrasted with the LEDs.

‘The sun’ was lifted in to place behind the DJ booth using a 66 metre high crane and trimmed at 20 metres so the lights on it had to throw at least 30 metres to the dancefloor / audience … and still be powerful and effective.

The Spiiders were run in extended mode and pixel-mapped through an MA VPU media server allowing Eran and his team to create an entire new world of looks and effects with video treatments.

The single pixel functionality of the Spiider and the flower effect is “super cool” says Eran, “this added a very nice twist to the show even at that throw distance!”

He continues that they “absolutely love the colour system, the sharp fast optics and wide range zoom” of the fixtures which helped create different ambiences throughout the show.

“Spiiders are probably the best moving LED fixtures of their class on the market today,” he concluded.

In addition to that, 8 x BMFL Spots were mounted on vertical truss towers positioned in an arch upstage of the DJ booth adding depth to the stage and extra punch to the dance floor. 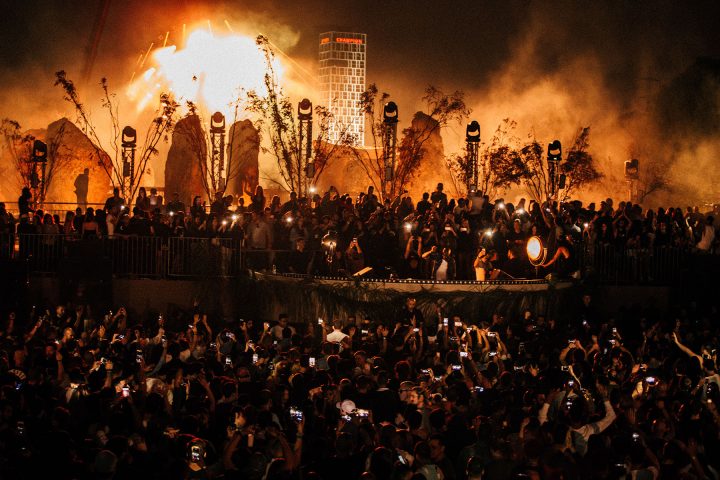 Early in the evening, the audience had the impression that these back BMFLs were in fact the main lighting rig … maximising the surprise element when the sun burst into action!

Another four BMFL spots were located behind the hill throwing backlight across the entire scene and making magnificent silhouettes of the rocks!

For key lighting the DJ booth two PATT 2013s aside brought a warm tungsten glow and their distinctive shape also assisted photographers in getting a nice background in which to frame their artist shots.

Lighting and audio equipment for the event was supplied by Argaman Systems, one of Israel’s leading production and rental companies. Structures and trussing came from Stage Design, lasers from Saar Lasers and the crane was provided by Dror Cranes.