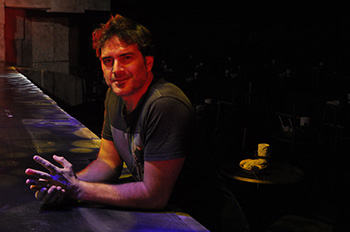 “Franciscus, a reason to live” is a musical based on the life of St. Francis of Assisi, and perhaps the most prized and acclaimed spectacle in Argentina’s most recent season. Its staging combines, among other elements, excellent performances, acrobatics over the audience, live musicians, video projections and a light design that professionally highlights the different environments.

With the artistic direction of Norma Aleandro, who was the protagonist of “The Official Story”, the Oscar-winning film in 1985, the staging moves in a parallel fashion for two different eras, enabling the audience to fully experience two hours of excitement.

Ariel “gato” Ponce, along with Ariel Del Mastro, were responsible for the lighting of the show. In this interview, we speak with Ariel Ponce. These days, Ariel is working on other important shows, one of them being Malevo, the group that stood out in America’s got talent.

Through the interview, Ariel shares details of the preparation and the equipment used, and also tells how he has journeyed from his beginnings to working on the most prestigious shows in Argentina.

LightSoundJournal: What did you do differently with this version of the show, compared to what was shown in Stravaganza?

Ariel Ponce: We decided to use more streets and building fronts than in the previous show, as this show has many bright scenes, with daylight and past eras. Also, we use more colours, of course, to differentiate between scenes that happen during the day and night. We also experimented with a curtain of water which worked with the video content.

LightSoundJournal: What requirements did show’s director set when creating the lighting design?

Ariel Ponce: He wanted more light, natural brightness for some scenes, although we needed to accomplish this without losing the magic of the theatre. 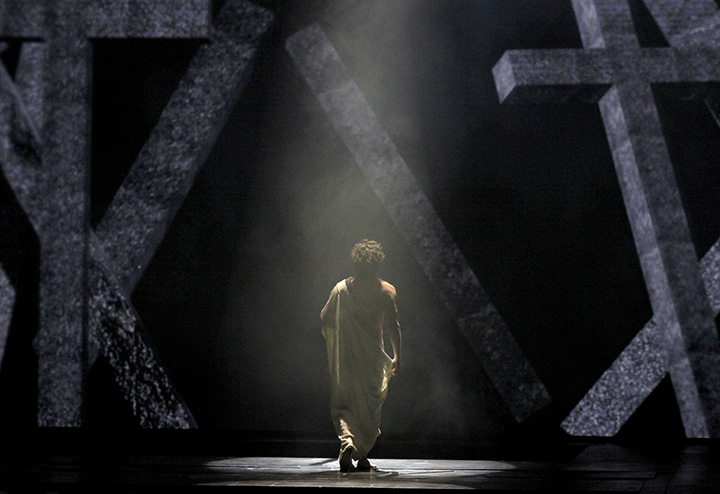 LightSoundJournal: How long did it take you to finish the light design?

Ariel Ponce: I spent about 15 days programming everything in a large lighting studio (Cue Uno), which gave me the ability to programme on stage. I did it for the comfort, the 3D programs they own and, of course, for the use of their consoles. We then had about a further 20 days in the theatre itself with rehearsals.

LightSoundJournal: Did many things change when it came to running your programmed material?

Ariel Ponce: Just a few. The director decided to remove two scenes that did not add so much to the story, and others were displaced since we had live musicians.

LightSoundJournal: What tools did you design with?

Ariel Ponce: We always work with MA Lighting consoles, grandMA2; the program of the studio that I referred to earlier, Vision 3D, and Vectorworks for drawing the staging and environment.

LightSoundJournal: How did you work with musicians on stage?

Ariel Ponce: We illuminate them only with wash LED effects, from behind and from the floor as they were behind a transparent fabric. 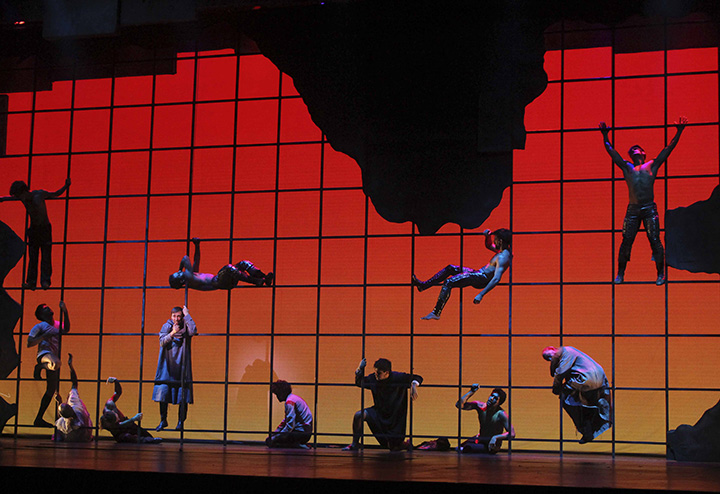 LightSoundJournal: And what can you say about the treatment for acrobatics performed above the stalls?

Ariel Ponce: For all flights, we use light from below or, at most, at the same height, almost nothing overhead. For the acrobatic flights above the audience we use moving head luminaries located in some boxes and others located in the front truss.

LightSoundJournal: Could you describe the plant of lights of Franciscus?

Ariel Ponce: First and foremost, the line of consoles from MA Lighting that I have used for 20 years. The plant has very generous fronts and streets. Only there we put 92 devices par64, plus 14 moving luminaries in front. We always use the following positions for lighting: front, row, floor, rear and upstage.
The entire roof has 4 trusses with 80 moving heads, a mixture of beams, spots and wash. In total, approximately 100 movers. Then, smoke machines to generate a effective and friendly fog.

LightSoundJournal: Which company was responsible for providing the lighting and projection equipment?

Ariel Ponce: We have been working with CDM Producciones for almost 20 years. Together we have made more than 400 presentations, and we already know how they work.

LightSoundJournal: How do you prepare for the tour with regards to lighting equipment? Will you take everything or rent in the cities where the show stops?

Ariel Ponce: It is likely that some types of device will be replaced due to assembly times, but the equipment will probably be taken from here, with the same original company. They already know how to assemble it and they know the specific needs of the show, for example, places where cables are passed, where there is water, when flights happen, location of machinery, etc. 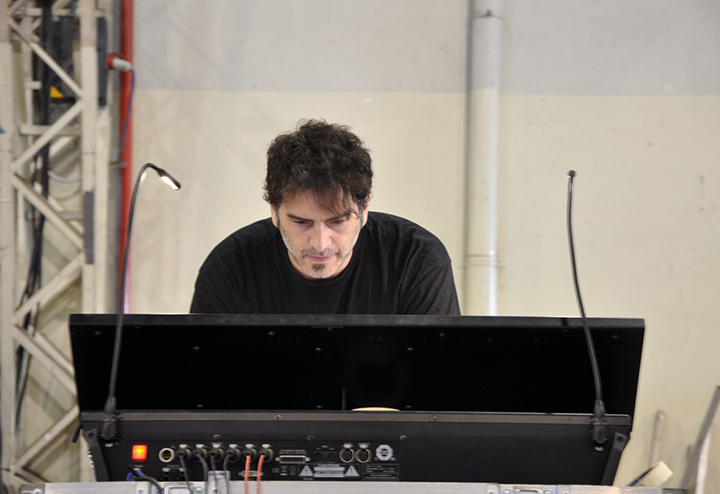 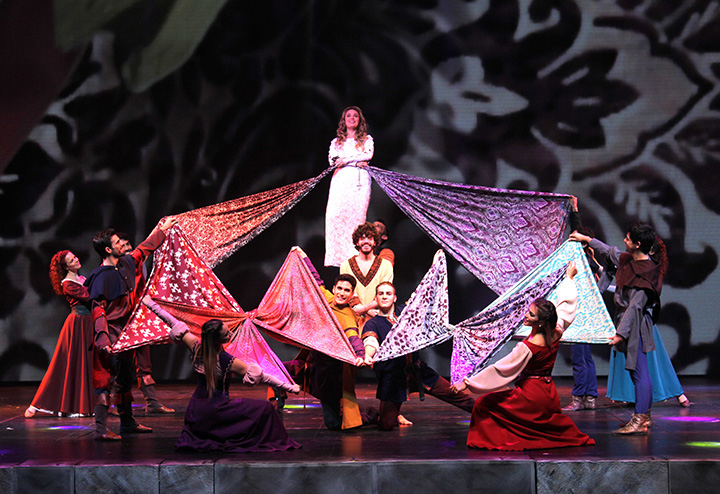 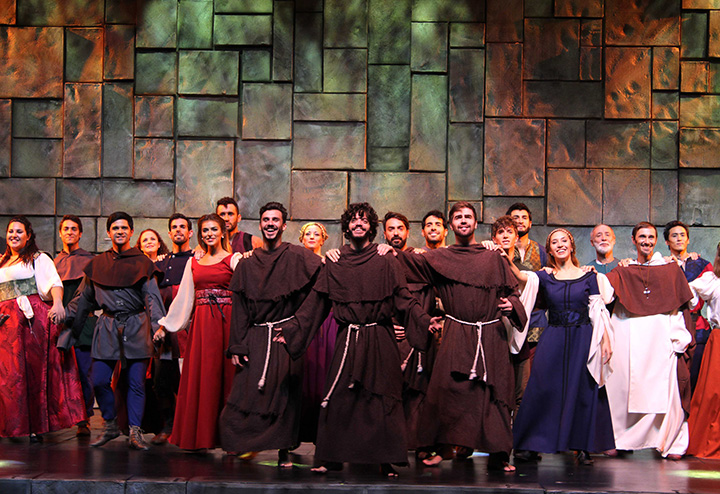 LightSoundJournal: Let’s talk about you now. How did you get started and how did you become a lighting professional?

Ariel Ponce: (Laughs) Talking about myself makes me feel ashamed! I have always been interested in everything electrical, even from when I was a young boy. I studied in an industrial college and specialised in electronics. Later, before starting university, 5 of my friends from the school were already entering in the show business; it was there that they told me that I had to be part of it! I started and got to work, first in the electrical department and then in artistic aspects of the theatre. It was “El Nacional”, owned by Alejandro Romay. Like everyone, we moved on up little by little and learned a lot as we progressed. First, placing equipment, then operating a follow spot or assisting on stage, then operating the console, then programming, before finally getting to design a show. My first design was with Nacha Guevara! Imagine my nerves. Mrs. Nacha Guevara helped me a lot since she’s a walking guide book! I had to learn; there were no other options! (Laughs).

LightSoundJournal: Why did you choose to work in lighting?

Ariel Ponce: When I went to the El Nacional theatre, some guys chose to work on sound (which I did not dislike at all). But after seeing other shows, I was more amazed by the “view” of the audience than what they heard. I think it’s an area with more possibilities and more space for creation.

LightSoundJournal: What suggestions would you give to young people who want to work in lighting?

Ariel Ponce: Working in lighting is a privilege; so it’s important to enjoy every moment. Take it very seriously, but enjoy it with the people around you. The result is the best prize! For that reason, young people just starting out need to give it time. Not everything comes easy and fast. Everything takes effort, study and sacrifice. Over time, the applause of the viewer will reward you.

Note: I want to thank Pablo Tomaselli (Press&Communications) for his collaboration for this interview.